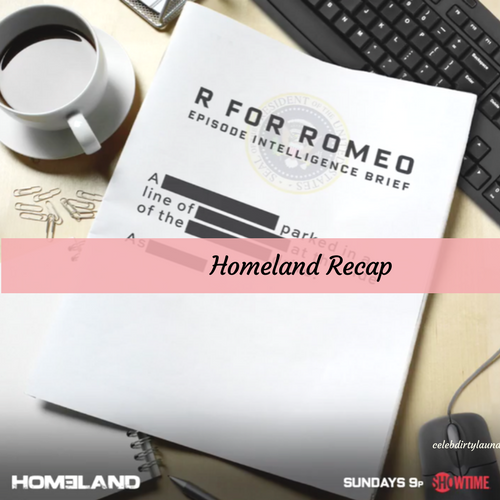 Tonight on Showtime their Emmy Award-winning drama series, Homeland airs with an all new Sunday, April 2, 2017, season 6 episode 11 called “R Is for Romeo,” and we have your weekly Homeland recap below.  On tonight’s Homeland Season 6 episode 11 as per the Showtime synopsis, “Carrie and Quinn make a discovery; Keane makes a decision; Max finds trouble at work.”

Tonight’s episode of Homeland kicks off where we left off last week. Carrie met up with Quinn and is shocked to see that he’s not at the hospital. Quinn is staking out the house across the street, he explains to Carrie that the man inside is the one that has been stalking her and put the bomb in Sekou’s van. Quinn explains that the vans were switched, and the real van is in the garage.

Quinn tells Carrie that she can keep the van, but he has plans to shoot and kill the guy inside the house. They begin bickering back and forth, Quinn freaks out on Carrie and reveals that he knows the truth about Berlin now [Dar’s version of the truth]. Quinn blames Carrie for his stroke, and his mental issues, because Dar told him that Carrie woke him up out of the coma early. Against everyone’s advice,

Against everyone’s advice, President Elect Keane decides to hold a press conference to defend her dead son’s honor and call out whoever made the video about her son. But, as predicted the press conference doesn’t go well, and it looks like Keane is digging herself a bigger hole.

After the press conference, Saul pays Keane a visit, he has something important to tell her. Keane knows that Dar Adal is responsible for the propaganda against her son, but Saul says that it is much more complicated than that.

Meanwhile, Dar Adal pays O’Keefe a visit. He wants to see Max. Max is being help at O’Keefe’s office, because he was caught recording a video on his cell phone of Dar and O’Keefe earlier. O’Keefe thinks it’s all a big understanding, but Dar isn’t buying it. He barges in to the room where Max is being held and he recognizes him, he knows that Max sent the video to Carrie. After Dar roughs him up a bit, Max still refuses to talk, he just wants a lawyer. It looks like Max is in a world of trouble.

Saul fills Keane, Rob, and the security team in on Dar and O’Keefe’s propaganda mill they have set up. But, they are raking in millions in finance from major lenders – Keane’s team thinks that it may actually be government funded. While they are bickering over how to deal with O’Keefe and Dar, O’Keefe has the nerve to call Keane’s office and request a meeting with her.

In the morning, Carrie tries to talk to Quinn about their blow-up the night before and what happened to him in Berlin, but Quinn isn’t interested in chatting. Despite the fact that he’s not in good shape, he leaves the house to tail the man that he has been hunting for days. Carrie sneaks across the street to scope out the garage, she is shocked when she realizes that Quinn was right, and Sekou’s real van is parked there.

Carrie thinks the house is empty and she heads inside to snoop around. But, the man quinn was following has returned. He appears out of nowhere and attacks Carrie. Quinn arrives a few minutes behind him and saves Carrie, then he murders the man that killed Astrid and Sekou by bashing his head in with a rock over and over until his face isn’t even recognizable.

Max is thrilled when he thinks he has made a friend at the warehouse, and the man that brings him lunch in the room where he’s being held – slips him a key pass to get out. Max sneaks out of O’Keefe’s office, he makes it all the way to the parking ramp and then men in a van grab him and toss him inside. It looks like he fell right in to their plan. Carrie calls

Carrie calls Pallis and asks him to come to the address personally so that they can work out an immunity deal. Quinn finally explains to Carrie that Astrid came from Berlin to take care of him, and the man he just killed shot her and killed her. Quinn breaks down and says that he has never had a heart, it’s not from waking up out of the coma, he’s always been this way.

O’Keefe proudly announced that he’s the one who made the video about Keane’s son, so she and her entire security team decide to pay him a visit. She goes on the air with O’Keefe, and they wind up in a shouting match. Keane announces that she knows he is running the propaganda mill, and the government is paying him to do it, and she vows to shut him down and prosecute him to the fullest extent of the law.

Dar Adal’s men are the ones that picked up Max in the parking ramp, they came him to a new location where Dar is waiting for him. Dar insists that he doesn’t want to hurt Max. Apparently, Dar wants Max to hack in to O’Keefe’s computer to find a website that he has been supposedly making about Quinn.

Pallis arrives at the house to check in with Carrie and the FBI, apparently there is an issue with the immunity deal, the FBI doesn’t think that it was self-defense. Carrie explains that the man was trying to kill him and Quinn saved her. She takes Hollis to the garage to show him the van, which still has pictures of Sekou’s family clipped to the visor. Hollis is thrilled by the huge break in the case, and agrees to make Quinn’s immunity deal work.

Keane’s appearance on O’Keefe’s show seemed to only make people angrier. Her hotel is surrounded by thousands of angry protestors, and one of them runs in front of her car and is hit.

Carrie finds Quinn staring at a dry erase board in the kitchen, it’s been wiped down, but he’s trying to read what was wrote. He says that he thinks the black-ops team was working on the EastCoast, where they already are. Carrie puts two and two together when she sees some FBI agents unlocking the garage door to get the van out. There was a bomb triggered, and the house goes up in flames, Carrie and Quinn manage to make it out alive…barely.