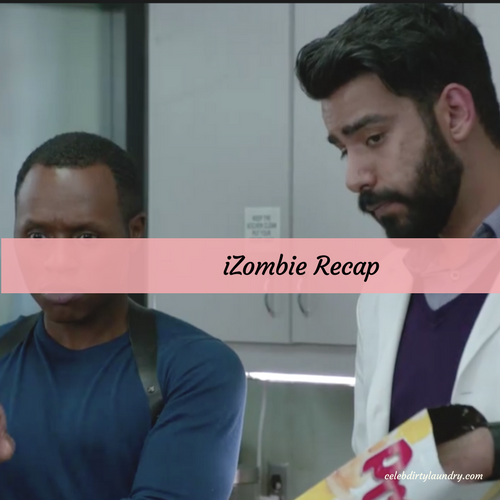 Tonight on the CW iZombie airs with an all new Tuesday, April 11, season 3 episode 2 called “Zombie Knows Best” and we have your weekly iZombie recap below. On tonight’s season 3 episode 2 as per the CW, “Liv, Clive and Ravi investigate a fatal car accident and suspect foul play was involved. Starving, Liv and Major consume the brains of the accident victims, a father and his angsty teen daughter.”

Clive was asked about his connection to Wally after the detective working the case found a picture of him with the victims. But Clive knew did his best to downplay his association with the family. He initially said that he became their case of emergency contact because he lived nearby however he later went into greater detail when he saw that the other guy wasn’t buying it. So Clive said that he had lived next door to them when one day he heard a domestic disturbance and went to check on Wally and his mother. And so the rest sort of became history.

Clive had walked in on Wally’s father hitting the family and had arrested the other man after Wally had made an outcry. However, the other detective was skeptical about whether or not Clive’s relationship with the family ended after the father’s arrest. So there was an awkward conversation over Wally’s body about what exactly happened to him. The other detective had implied that it was odd that Wally was murdered around the same time as a private contractor bought out Max Ranger though both Clive and Liv tried to keep their cool when he mentioned Filmore-Graves.

They knew that they couldn’t afford to let anyone else get tangled with what was happening. So they kept their mouths shut and had waited to the other guy finally gave up trying to prod them yet what happened and specifically what happened to Wally was getting to Clive. He knew that the killer was someone that must have found out about zombies and so he was still looking into who that person could possibly be with Live and Ravi’s help when, unfortunately, he got a new case. Clive had been assigned to a homicide investigation involving the Chens.

Stan Chen had apparently been in the car with his daughter Cindy when they were purposely hit as they were waiting by the side of the road. Yet, Liv had been happy about getting the new case because she hadn’t eaten in a while. So she decided to make chili hot dogs with their brains and had eaten the father’s brain before Major had even got a chance to choose. And so Major got stuck with teenage girl’s brain and the whole thing became a trying experience for Clive. Clive was still getting used to it all and dealing with an overly peppy Liv and a hormonal Major was difficult for him.

But they were at least useful. Major had gotten a vision of Cindy showing her father something on her cell phone that he didn’t approve of and whatever it was Stan had felt the need to go to the authorities with it. So Liv tried seeing that memory from her own point of view and she had nothing until she met Cindy’s supposed best friend Winslow. Winslow had unfollowed Cindy on the night Cindy died and it had been suspicious however Liv’s flashback showed her why Winslow had gotten so upset with Cindy on the night Cindy died.

Cindy it seems had been a tad judgmental, at least in Winslow’s eyes, when Cindy had thought it was gross that Winslow was sleeping with her stepfather. So both Winslow and her stepfather Ken had a motive for wanting to shup both Stan and Cindy and they also knew Cindy’s ice-skating schedule because Winslow used to skate as well. However, Clive needed something more than just a vision to use against the two so he got a warrant for Winslow’s phone. He had been hoping that way he could get the bedroom photo legally though he also found evidence of Winslow’s guilt.

Clive had found out that Winslow had gotten in trouble with the law after illegally driving her stepfather’s car. The one that easily matched what hit the Chens and had even had some denting on it proving that it had recently been in an accident. Though that had seemed odd to both Clive and Liv because they wondered what Winslow’s mother was talking about when she said her daughter was a good girl. So Clive had wanted to get Winslow away from her mother and stepfather as fast as possible because he didn’t want to leave a young girl with them.

He thought that Winslow’s mother was too blind to see what was happening right under her nose and had worried about Winslow’s safety. Yet, as it happens, Tori knew more than she was letting on. She had apparently had an app on her phone called TinkerSpy which allowed her to watch everyone phone call and text message that Winslow sent. So she saw the moment Winslow revealed she was sleeping with Ken and the moment that Cindy told Winslow that her father was going to go to the police, but Tori couldn’t allow that to happen because then everyone would know.

So the new tech guy with the police department was a great a help. He retrieved all of Winslow’s texts and had realized that someone was spying on her without her knowledge. But he was also a little weird and had tried to talk Liv into joining a fetish club so both Liv and Clive were taking a wide berth from him for now. And Clive later went looking for Winslow’s stepfather because Ken was still guilty of statutory rape however Clive didn’t fully tell everything that had happened between him and Wally’s mother Anna.

Anna hadn’t been ready for another relationship after her ex went to prison, but Clive would have liked to have found out what would could have happened between them if she had been ready because he had cared about her and Wally. They had used to cook together and watch tv and they had almost been a family. So it had hurt Clive when Anna went to go live with her brother. However, he hadn’t realized how much he cared until it was too late and then he had just tried to understand that Anna thought she was doing what was best for her family.

And the sad part was while he may have thought that she was in a better place with her brother, her neighbor had gone online and had told a whole group of “truthers” that he lived right next door to zombies. So someone had track down his location and had killed the entire family based on what they had been told!