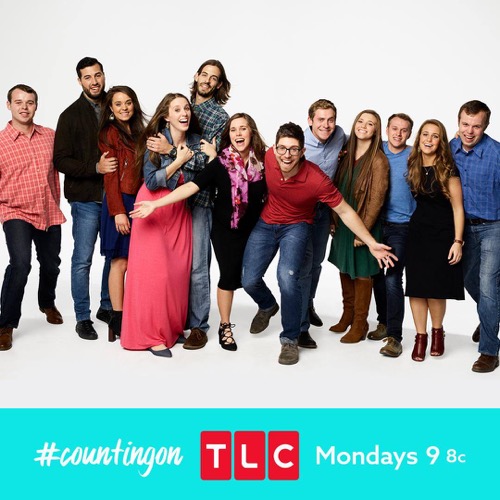 So make sure to bookmark this spot and come back between 9PM – 10PM ET for our Jill and Jessa Counting On recap. While you wait for our recap make sure to check out all our Duggar Family news, spoilers, pics, videos & more, right here!

Jinger was getting married. The young woman had apparently fallen in love with the man of her dreams that also seems to be her perfect fit for her and so now they were getting married. But there was one problem with all of the wedding plan and its name was Jinger. Jinger has a tendency to be indecisive and so her sisters had to sort of guide her with the wedding plans. Jinger’s sister Jill had recommended the dress shop where she got her dress because she knew that the wonderful woman at the store – Renee of Renee designs – could help her sister realized what she wanted her dress to look like.

So Jinger’s sisters had come together for her and they hadn’t been surprised when Jinger appeared to be absentminded. Like the time when the bride-in-waiting had forgotten to ask her sisters to be her bridesmaids. Though Jinger didn’t mean to forget anyone. She had merely been a little surprised when she was talking about wedding planning and saying that she was going to have ten bridesmaids that she had forgotten to actually ask those bridesmaids. And so she had winged her invitation. She told them in a group that she wanted all of them to be a part of her wedding and that wanted Jessa to be her maid-of-honor.

However, Jessa had been thrilled to be her sister’s maid-of-honor and she didn’t have a problem with her sister forgetting almost to the last minute to tell her. Jessa had just known that was Jinger’s personality because the two were very close. Jinger as it turns out had also been Jessa’s maid-of-honor and so Jessa had already thought she was going to be returning the favor to Jinger anyways. So it was nearly impossible for anyone to be offended by Jinger’s absentmindedness and her family cared more about Jinger being happy than being offended. And so all the women had later gone with Jinger to see Renee.

Renee had done wonders for Jill and no one in the family doubted her capabilities. But Jinger had a unique style. Some called classic or dignified however she had a hard time picking out what she likes and she often second guessed herself by asking her sisters whether she likes nice or not. So wedding dress shopping had been a trial for Jinger. She had thought that everything would come to together because she had already come up with wedding dress ideas for Renee and had even sent certain images of what she wanted in her dress to the other woman. And yet Jinger had felt overwhelmed at the shop all the same.

Jinger had said that she wanted three-quarter to full length sleeves and she had been shown plenty of those sleeves wedding dress. Yet, the main problem with creating a wedding dress had been the details. Jinger hadn’t known what type of lace overlay she wanted because it had been hard for her to imagine what it would look like in the end and so she thought the dresses she were trying on were merely giving her a general idea of what she wanted. So there were still a few things that Jinger had to figure out before she could find the right dress and with time she eventually she picked a dress that she thought was absolutely perfect.

So Jinger picked the dress for the wedding and she had also wanted it to be expanded as much as possible so she agreed to a twelve feet long dress. However, she knew that it would look one of a kind and its not like it would be too big for the venue. Jinger was getting married in a cathedral and her entire wedding was over the top. The dress huge, the bridal party was huge, and they hadn’t gotten to the flowers just yet. And so Jinger’s wedding was going to be more of a production than her sisters’ and after the dresses all the bride-to-be wanted to do was hang out with her family before she moves.

Jinger was apparently going to move after the wedding because she had to go where her husband worked. So her upcoming wedding was bittersweet in a way. Jinger’s family didn’t want to say goodbye or go months without seeing her. But they understood that she had made the decision to marry Jeremy Vuolo and that soccer was going to keep them on the move though little things that Jinger did with her family had made her leaving a little easier. Jinger had arranged for a painting session with her family as well as her in-laws and everyone had enjoyed the experience. They painted sweet photos, photos of the couple’s favorite thing which was coffee, and each one had been heartfelt.

Though Jessa had had to take the babies for a drive and she had been glad that she gotten out of painting because she knew that she would be horrible at it.