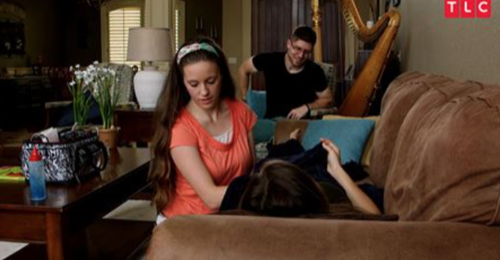 So make sure to bookmark this spot and come back between 9PM – 10PM ET for our Jill and Jessa Counting On recap. While you wait for our recap make sure to check out all our Duggar Family news, spoilers, pics, videos & more, right here!

The countdown to the wedding date was overwhelming Jinger. Jinger wasn’t someone that was into details or really into much planning really. So preparing for the wedding was hard for her. She had to make decisions out her wedding dress, the bridesmaids’ dresses, and even about the food they were going to serve at the reception. But what kept Jinger from freaking out too much were her siblings. Jinger’s siblings knew how she could be and they made sure to help her as much as they could because they did want her to enjoy this time and so they tried to lead Jinger to making certain decisions.

The siblings had chosen to be there for food tasting because they knew too many choices were just as hard as too few for their sister. However, Jinger had surprised everyone when she was able to come to a quick decision about what to serve for the rehearsal dinner and so she had found way to incorporate both the Duggar and Vuolo side. Jinger had actually gone with a past dish to honor her future husband’s Italian heritage and she had also picked pickled veggies because her family loved pickles. They apparently got their love for anything pickles from their mother.

Though neither the Duggar side or the Vuolo were a fan of exotic cheeses. Jeremy had asked for a cheese table because that was the only thing his groomsmen had truly asked for yet the bridal couple didn’t know much about cheeses and so they had relied on a family friend Linda Denzer. Linda was considered to be a great cook and she was familiar with making a lot of food for a Duggar party. So Linda had offered to help the couple figure out what type of food they want and she had brought ton of cheese selections which included brands that the couple had never heard of.

So that had been hard on the couple because they didn’t know how to decide. They had known Cheddar, American, and a few Italian cheeses though the smelly type of cheese was a little too much for them. That had unfortunately made Jinger’s siblings gag and crack jokes about how one of them looks like it has mold on it. Yet, with something like that said, no one had wanted to eat the cheese or be around it. And so there were times when Jinger’s siblings could be helpful and other times when they became part of the problem.

Jinger however didn’t need to worry about either Jill or Jessa. Jessa had had to sit a few of the events out because of her pregnancy and she had recently asked for her sister Jill’s midwife experience to hear her baby’s heartbeat. But Jill had said that either one child was experiencing a range of heartbeat levels or Jessa was possibly carrying twins. Twins run into the family and their grandmother as well as their mother both have had two sets of twins. So the probability was high for Jessa and surprisingly she hadn’t been worried about it in the slightest.

Jessa had known that she would be happy either way. However, Jessa had also known that her firstborn might be interested in his younger or siblings because she had seen how her nephew Israel had reacted when he’s around Spurgeon. Israel was at the age where Jessa’s son would be and he had loved his little cousin. He had pushed him around in the walker and had enjoyed having Spurgeon around as a little playmate.

Though what Jessa didn’t see was how Israel could be territorial. Jill had taken Israel to see his other cousins and Aunt Anna at one of those fun kid gyms and the toddler had quickly grown attached to one of those Little Tyke sort of cars. So the little boy had grown attached to his little car and had pushed his cousin Meredith because he didn’t want her to come near it, but Jill had known that her son was progressing too quickly into his terrible twos and she had made him make amends to Meredith by blowing her kisses. And so one toddler was a lot to hanle.

Anna for one had four children all under a certain age and her motto had been that “I’m not a perfect mother, but I love you a lot”. So often the older kids helped their siblings find their stuff or their shoes just so they could all leave as fast as possible. Yet, that Duggars were used to that growing up and they found that when they needed help that they had a large family to turn to. That’s why Anna got to have some adult conversation with Jill while their kids played and why Jinger relied on her family for help with her wedding.

So it all came together in the end and Jinger had also gotten help from family friends with the details. Like Ms. Cindy! Ms. Cindy was an old friend of Michelle Duggar and so the kids grew up with Ms. Cindy in their lives. Though recently Ms. Cindy had looked at wedding chapels with Jinger and together they figured out a way to give off the illusion of a candlelight wedding in the afternoon however Ms. Cindy had also thought of another idea that Jinger’s fiancée wasn’t so sure of. She had apparently thought it would be nice for Jinger to see during the ceremony.

The idea was for Jinger to sing during the unity candle lighting, but Jeremy had hesitated on that one. He had said that he wasn’t sure about putting so much on Jinger. So that had been a nice save for the hesitation he had given the ladies. However, another nice save had been later on when Jessa said her toddle fell asleep during a Christian rap concert because the ear muffs had made everything quiet for little Spurge. And that’s why Spurge ended up missing the experience of having his dad onstage.