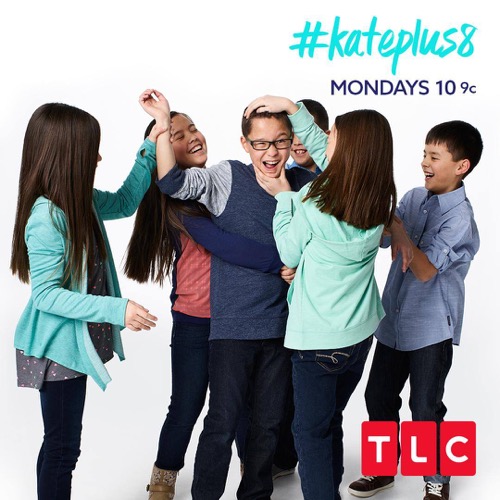 Tonight on TLC Kate Plus 8 returns with an all new Monday, July 17, season 5 episode 10 called, “Kate Goes Skiing… Sort Of…” and we have your weekly Kate Plus 8 recap below. On tonight’s episode as per the TLC synopsis, “Spring break takes Kate and her kids to Vermont for a week on the slopes. Skiing lessons, tubing and a trip to the hospital make for one wild week.”

Kate was an anxious person that worried about the many ways she could get hurt and so she hadn’t been all that enthusiastic about taking a ski trip for Spring Break. However, she had been convinced to go because of how excited her children had been. The younger kids had wanted to learn how to ski and the older girls had expressed an interest in snowboarding. So Kate had arranged classes for everyone and she had also mentioned that she was going to take part in any of it. She had told the group that she had merely come along as an observer and so she didn’t want to take part in any of the activities.

But her kids had shown some natural skill out on the snow. The younger ones didn’t have much of a problem with learning to ski and all of them had actually enjoyed it which was quite rare for such a large group. So Kate hadn’t wanted to dash their hopes by telling them it was going to rain the next day. She had thought that she could come up with another surprise for them to take the sting out of not skiing and had kept quiet about it because she hadn’t wanted to disappoint them however her surprise had turned out to be spa trip. Kate had thought that they would all enjoy a day of relaxation at the spa and she hadn’t been wrong.

The kids had loved the spa. They had been interested by getting facials and the boys had shied away from it, but they had admitted in an aside that they knew they were going to get made fun of and hadn’t cared. They had wanted to take part in the spa day and they did. Though the actual experience wasn’t that great. Joel and Aadan had gone through a special facial that blew hot air into their faces and they both complained about it because they said they couldn’t really breath with that thing on. So the boys hadn’t given the facials a two thumbs up. They had thought that their faces were just shiny afterwards and so only their mom enjoyed their appearance.

Kate had thought that everyone looked refresh and so she had enjoyed their spa day the most. Yet, the kids had missed skiing and they had gone back to it the next day so excited. That one of them had tried to do a ski move on her own and had later fallen quite badly on her wrist. Alexis had said that her wrist hurt and so Kate had taken her to see the doctor though the doctor hadn’t had good news for them. He said that Alexis had a buckle fracture which Kate described as having your bones mushed together. So Alexis had to miss out on skiing with the rest of her siblings and simply had to enjoy what else Kate had planned.

Kate had wanted to do something with the kids and so she had arranged Game Night. Game Night at their house doesn’t always end well yet Kate had thought a game of Charades would be fun and the kids had thrown themselves into the game. They had split up into teams and had gotten super competitive before long. So they had all enjoyed the game and hadn’t wanted to stop even as Kate kept chanting bedtime whenever they asked about something. Like laundry or what they had planned for the next day. However, Kate still had a few things up her sleeve that everyone could take part in and she had also decided to join the kids when she arranged for them to go tubing.

Tubing was when they sat in these inner tubes and go down the hill together. So Kate had thought that it was safe enough to try out and she had regretted that decision. She had gone down the hill with one of her kids and had been frightened out of her mind though that had been after she had complained about getting into the tube and how she was arranged behind Cara because she had wanted to be straight behind her daughter rather than crooked. But the kids had at least been glad that Kate tried it. They had thought that was the best their mother could do and hadn’t minded that she complained about it afterwards.

The kids knew that their mother was afraid of things like that and so she only had to do the tubing once. Though the kids went plenty of times and had also had a race that they enjoyed. So the kids didn’t let what happened with their mother deter them from enjoying the rest of their vacation yet Kate had still wanted to prove herself. She had seen Alexis eventually go back on her skis and had also wanted to brave so she had arranged a private skiing lesson. Kate hadn’t known how to ski and therefore she had needed lessons only she kept getting afraid. She would break out into tears the second she’d slid.

Yet, Kate had been disappointed in herself. She had wanted to learn and had wanted to give up so quickly so she had tried doing her lessons with her kids. Kate had gotten Cara to help her and the whole time she kept saying things like “if I break my arm, you’ll have no one to look after you. So Cara and Mady had said in their confessionals that they would have been fine because they were seventeen and their younger siblings were practically thirteen. And so the girls didn’t understand why their mother would freak out like she did, but they didn’t let that get in their way or stop them from enjoying the rest of their vacation.