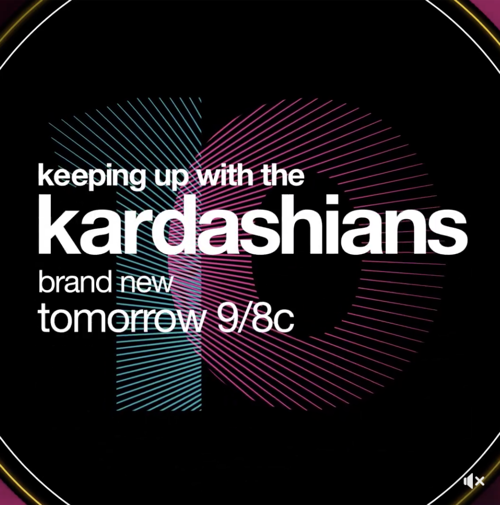 Tonight E!’s most-watched series Keeping Up With The Kardashians (KUWTK) returns with an all-new Sunday, October 1, 2017, season 14 episode 1 and we have your KUWTK recap below.  On tonight’s KUWTK season 14 episode 1 premiere called, “The Cleveland Show,” as per the E Online synopsis, “In the Season 14 premiere, Kim and Kourtney finally get a glimpse into Khloé’s private life in Cleveland. Meanwhile, Kendall receives some harsh feedback on a recent project and the family is blindsided when Cait reveals some shocking news.”

It’s been ten years since the start of their show and tonight the Kardashian/Jenner clan did a photo-shoot honoring the event with The Hollywood Reporter. But seeing as it has been ten years, the group also answered a couple of questions they’ve been asked and it turns out there were people that believed that all of the sisters have slept with Scott. So Khloe shut that down right away. They haven’t all slept with Scott and Kendall was possibly the best party planner out of all them because she threw the best parties. And so the ladies dealt with fun stuff like that on set.

But Khloe had other things going on with her life. She knew that she should go out to Cleveland eventually because her boyfriend Tristan played basketball there and so she wanted to make time for him however her sisters had been talking about her trip there amongst themselves and Kourtney hadn’t thought Khloe had the time. They both knew Khloe had too much going on in LA to take the time off and so Kourtney didn’t think her sister would give to Cleveland while Kim did. Kim said that Khloe put everything on hold for the man in her life and that’s why she never doubted Khloe would go.

When, in fact, both sisters ended up traveling with Khloe and friends to Cleveland. They had all made a girls trip out of it because Tristan was only going to be in town for one night before he had to leave for an away game. So the trip was more about getting Khloe and her family used to the city and that way they would want to come back, but Tristan didn’t need to worry about that so much because the ladies enjoyed their trip. They loved going out and not having cameras all in their face. And the fans there also gave them space.

They were able to book into their hotel pretty easily and had even met up with a couple of Tristan’s friends who had stayed behind for dinner. So it was an relaxing first day in the city and the only one that had gone back to the hotel early had been Kim because she wasn’t feeling so well. She said she had been feeling off and had returned to the hotel to relax though she did touch base with her sister Kendall before turning in. Kim and the others have all tried to be there for Kendall since the whole Pepsi commercial thing blew up because Kendall hasn’t been handling it well and had shut herself up at her place. But the sisters rallied around Kendall and try to get her to tone some people out.

There were people sending Kendall texts every five minutes with bad news and all they were doing was making worse for Kendall. But the backlash wasn’t even the only thing that was upsetting Khloe and the others had also found out Caitlyn had a sex reassignment without telling them. Like Caitlyn had seemingly left that part when she gave them a copy of her new book and just didn’t think it was necessary to talk about it with her daughters or even her ex-wife Kris. So Krise had been upset by that and the girls had been forced to say that’s Caitlyn for you. Caitlyn had given them her book as a heads up yet left out everything that would make them upset in her final copy.

So, as expected, there were a few more things the sisters found out as Caitlyn started promoting her book. The reassignment surgery had been the first thing and Kris had problem taken it the hardest because at least Kendall and Kylie had heard about it from Caitlyn, but there had also been a part in the book where Caitlyn accused Robert Kardashian of taking the OJ case despite knowing OJ was guilty because he wanted to get back at the recently married Kris. Which was unfair to Robert seeing as it wasn’t alive to defend himself and so that comment did was aggravate the girls. They had tried to be patient with Caitlyn and their patience finally ran out.

Take, Kim! Kim out of all of them had tried to be patient with Caitlyn even when she hasn’t liked what Caitlyn did or said however Kim adored her father and she was never going to forgive Caitlyn for painting her dad as some bitter and unscrupulous ex. So Kim could have called Caitlyn to vent and instead she called Caitlyn to talk about Kendall. Kendall was dealing with backlash and she didn’t need her dad to bring it up or say anything that would make it worse. And so Kim calmly explained that to Caitlyn and then pretended she had bad reception to get off the phone with her former stepfather.

Other than that, though, the Kardashians enjoyed the rest of their trip to Cleveland. They had stopped by Tristan’s house and Khloe’s sisters had seen for themselves that Khloe was making her life there. Khloe had her own closet that had been full of her stuff and she knew where to hang out so that they could all get drinks. So all that said to her sisters was that she wasn’t coming back! They had realized that she was spending more time in Cleveland and so seeing that closet perhaps had been them realized the other part. Like how she was going to be based there with Tristan and that they would all have to fly in or out to see each other. And so the others were still trying to wrap their minds around that one.

But what they all should have foreseen was Caitlyn later talking about Kendall’s Pepsi commercial even though she had been specifically asked not to bring it up and to write it off a mistake if it was brought up vy someone else!