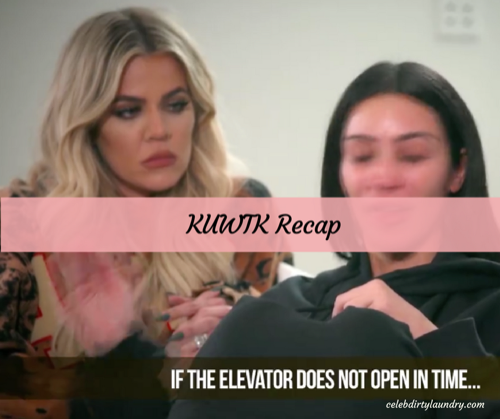 Tonight E!’s most-watched series Keeping Up With The Kardashians (KUWTK) returns with an all-new Sunday, March 12, 2017, season 13 premiere episode.  On tonight’s KUWTK season 13 episode 1 called, “Time to Dash,” as per the E Online synopsis, “During a trip to Miami, a major department store makes an offer to purchase Dash, leading Kim, Kourtney and Khloe to argue about the future of their stores. Meanwhile, Kourtney struggles to enjoy herself while in Scott’s presence; and Khloe keeps Kim in the dark about her new relationship.”

The Kardashians are back for another season full of behind the headlines drama and Kardashian family drama. It all kicks off this week with the season premiere. This week on the season premiere of Keeping up With The Kardashians Kourtney andJonathon are at the Dash store looking at the merchandise and talking about rebranding. Jonathon asks “Does Kim know that the store needs to be rebranded?” Kourtney says “No.” She calls her and tells her “When we are in Miami we need to go check on the Dash store in Miami.” Kim agrees.

Everyone heads down to Miami for Kanye’s concert. Kourtney and Scott are hanging out with their kids. Kourtney says ” Scott and I are trying to co-parent even though we are not together anymore.” Everyone is having dinner together and Scott is being a bit obnoxious. This annoys Kourtney because she is trying to be a friend to Scott, but she also feels the need to protect him and says “When we are in a social settting it is a bit difficult because I am not sure how to act.”

Meanwhile, back in New York Khloe is dealing with her own new drama. She is in a new relationship and while everyone else was in Miami she was in Mexico with her new boyfriend. There were some paparazzi shots taken of her and her new man. She tells Kendall “I didn’t see any of them around. I thought we were free and clear.”

Kim comes to talk to her about the situation. She asks her “What’s going on? I literally have to see pictures of you and this new guy?”

Khloe and Kim are sorting through clothes and Kim is still trying to gather information about Khloe’s new boyfriend. Khloe’s not giving anything away. Later she meets up with her friends to go have lunch. While they are having lunch the subject of Khloe’s love life comes up again. Khloes decides to reveal the information to her friends after swearing them to secrecy.

Kim, Khloe, Kourtney and Jonathon are touring the Dash store in Miami. While both Khloe and Kim are on board with selling the stores to the bigger department store Kourtney seems to be determined to hang on to it. Khloe tells her sister “Kourt we would have to completely redo the floors and invest a lot of money into this store when we aren’t even here all the time. It feels like it would just be a waste.” Kourtney seems to be angry and disappointed that her two sisters are not as invested in keeping the franchise open as she is.

Khloe is making arrangements for her new boyfriend Tristan to come to Kanye’s concert to meet Kim. Everyone is heading out to dinner to celebrate Stephanie’s birthday. While they are at dinner Scott starts texting everyone at the table and it makes for a very awkward situation since they did not invite him to the dinner.Later that night the

Later that night the argument about Dash is revisited. Kim asks Kourtney “Do you want to take over Dash on your own?” Kourtney says “Why would I want to do that? It was our project and we did it together.” The argument gets intense. Finally, Khloe says “You can’t even do the ordering on time Kourtney. We are getting rid of Dash period!”

The next day Kim and Kourtney sit down and Kourtney tells her “After dad died Dash gave us something to do as sisters and so it is sentimental.” This stops Kim in her tracks. She tells her sister “I see where you’re coming from in a sentimental standpoint, but we do have a business.” Kim then tells her “Scott just texted me and told me that he wasn’t going to the concert to give you your space.” Kourtney isn’t sure how to feel. She calls Scott and tells him “We’re all here in Miami to go to the show. You should go with us.” Scott tells her “I didn’t want to ruin your fun night. I could go to the show another night.” Eventually, Kourtney is able to convince Scott to come to the concert with everyone and they all have a great time.

After the trip Scott and Kourtney sit down and talk. Scott tells her “I think Miami was kind of awkward.” Kourtney tells him “It’s more so in social settings that it becomes awkward.” Scott responds “Exactly. I feel like we are best friends all day every day until we get into the social setting. Is there anything we can do about this?” Neither one of them is sure of what to do. Kourtney says “I do feel like my actions set you off.” Scott says “No offense, but your actions can’t set me off on the wrong path. I’m responsible for my own choices. I know there are times when you want to go out with your friends and don’t want your ex-boyfriend around. There are times when I want to go out and don’t want you around.” The two seem to reach a mutual understanding. Kourtney says “Fasten your seat belt buddy.”

Kim shows up at Kris’ house where she is making cinnamon rolls and tellls Kourtney “I have been thinking about what you were saying about Dash being sentimental to us.” Khloe speaks up and asks “So are we doing the deal or what?” Kris says “We’re waiting for an up front offer.” The girls decide to close the New York store, but keep the Miami store open. Kris tells them “I’m really glad that you guys are going to keep Dash. It’s really where you got your start in fashion.”