BY Kristine Francis on October 22, 2017 | Comments: one comment
Related : Keeping Up With The Kardashians, Recap, Television, TV 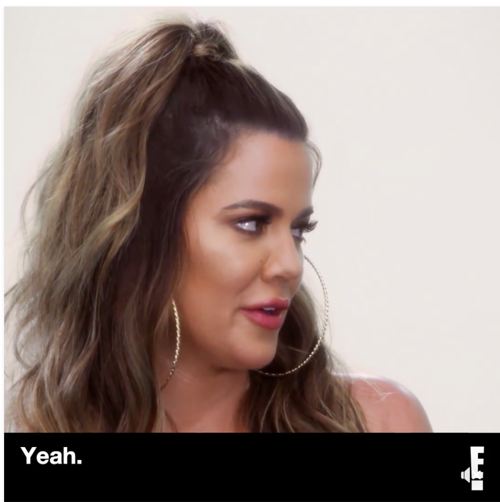 Tonight E!’s most-watched series Keeping Up With The Kardashians (KUWTK) returns with an all-new Sunday, October 22, 2017, season 14 episode 4 and we have your KUWTK recap below.  On tonight’s KUWTK season 14 episode 4 called, “Clothes Quarters,” as per the E Online synopsis, “Kourtney plans a fun sister getaway to bond with Kendall, but is distracted by news of Scott’s destructive behavior back home. Meanwhile, Kim stages an unwelcome intervention on Khloé’s wardrobe.e.

Kim and Jonathan got out of the house on tonight’s all-new episode of “KUWTK” by going over to John Legend and Chrissy Teigen’s home and they had enjoyed themselves.

They got to meet Chrissy’s dad and he turned out to be a big fan of the show. He said his favorite Kardashian was Kim, but he also said that it had been Khloe for a while until she had gone off and so Chrissy had cringed at that one. She was outspoken and her dad was apparently where she got from. But the whole thing had been a laugh and Kim had enjoyed being with everyone. So that was sort of what Kourtney wanted as well. She hadn’t had the chance to hang out with her younger sisters because they’ve been busy working on their careers while she’s been raising her kids and so Kourtney wanted to change that.

Kourtney went to great lengths to meet up with both her mom and Kendall however they didn’t seem to be too enthused about the lunch or the fact she wanted to plan a vacation for Kendall now that her sister was of legal drinking age. But Kourtney kept trying. She had laughed off her mom trying to greet other people while they were talking and she had tried to drum up some interest in a trip for Kendall. Kendall was a model and she was often traveling the world for one designer or another. So Kourtney had wanted to get some bonding time in and hadn’t been afraid to ask for help. She had asked Khloe what she should do with Kendall and, admittedly, Khloe had laughed at her.

Khloe didn’t think Kourtney should be all that afraid of hanging out with their sister because she knew Kourtney would be fine. She was the wild sister after all and she knew how to have fun. But Kourtney had been so much in her own head that she still ended up asking Khloe to go with them to Santa Barbra. She had needed support and had asked Khloe to sort of be a buffer if anything went wrong. So Khloe decided to go even though she didn’t think Kourtney needed her and her house had later gotten broken into because she had gone on that trip. Kim had thought Khloe needed to have a makeover and so she broke into Khloe’s house to repack Khloe’s bag for Santa Barbara.

Kim had pulled out clothes and repacked Khloe’s bag. She had styled complete outfits for her sister and had even taken pictures so that Khloe wouldn’t forget what went with what because she thought some of Khloe’s outfits were tragic. But Kim had previously tried talking about Khloe’s clothes with her and Khloe hadn’t wanted to get a makeover. She was happy with her style and knew that she couldn’t dress like everyone else. Khloe said that Kendall was the model and that both Kim and Kylie were the sexy ones. So Khloe had gone out to find her own style and not everyone agreed with Kim’s take on Khloe’s clothes.

Kourtney for one had liked some of the things that Khloe wore and had tried to warn Kim away from the makeover idea. Kourtney thought Khloe could get offended and that Khloe should wear what feels comfortable for her. But Kim thought she was right and so she broke into Khloe’s home with Jonathan. Jonathan and Kim had naturally worn camouflage for their break-in because they wanted to remain inconspicuous and because they had designed whole outfits around their jackets. So they had had a lot of fun what with breaking in and somehow managing to change everything Khloe packed. Which included the piece of luggage.

Khloe hadn’t realized what happened until they made the drive to Santa Barbara and she had wanted to change out of her traveling clothes. But by then, it had been too late. Khloe had been left with a bag packed entirely by Kim and luckily she hadn’t been upset. She had actually thought it was funny that Kim could be so sneaky and she was laughing as even Kendall said she was just talking about the clothes Khloe wears. So Khloe had started to wonder if her clothes were that bad. She thought she dressed nice and hadn’t understood that everyone was talking about her style, but Kourtney had taken the sting out of the situation.

Kourtney said that if she had chosen her clothes that she would have probably have gone with a workout outfit. But Kourtney also reminded Khloe that all the clothes in the luggage were Khloe’s, to begin with and that she was simply getting the chance to finally wear them. So Khloe didn’t really need a makeover. She just had to come out of her comfort zone and the outfits that Kim picked for her had looked good. Both Kourtney and Kendall had said that Khloe was upping her game and so Khloe hadn’t been offended. And the dinner would have been fine if Scott’s friends hadn’t kept texting Kourtney.

Kourtney was being bombarded by people concerned about Scott and they all wanted Kourtney to do something about Scott’s behavior. But Kourtney couldn’t control Scott or tell him what he to do. He was an adult and everything he did was part of a choice he made. So Khloe called Kim and Kim went over to Scott’s house to get Scott’s friends to back off. He and Kourtney weren’t together anymore and he shouldn’t use his bad behavior as a way to get Kourtney to pay attention to him. That’s why Kourtney thought he went on these binges and so she was tired of him using their relationship as a weapon.

Kourtney deserved better than that and so Kim made that clear for everyone. But once his friends stopped bothering Kourtney, she was finally able to enjoy herself on the trip and she was working on that awkwardness with Kendall. Kendall would love to hang out with Kourtney more and so Kourtney was the problem. She’d be in the same city as Kendall and not call Kendall and also she would greet Kendall like a stranger at the church despite sitting two people away from each other. So Kourtney knew she had to work on that and the Santa Barbara trip was her first step. And while Khloe left those two to enjoy themselves, she had hired Kim to be her stylist and Kim had turned her down.

Kim said she had too much to do!