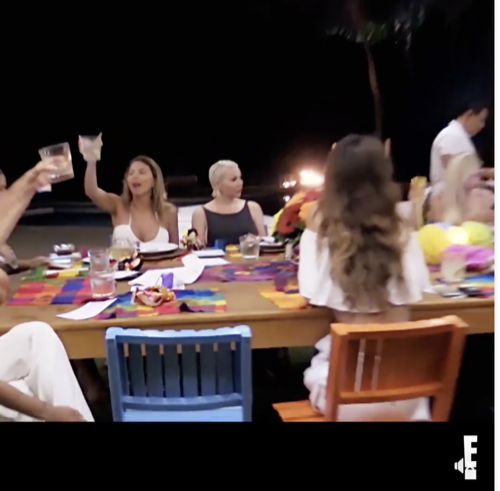 Tonight E!’s most-watched series Keeping Up With The Kardashians (KUWTK) returns with an all-new Sunday, October 8, 2017, season 14 episode 2 and we have your KUWTK recap below.  On tonight’s KUWTK season 14 episode 2 called, “Milfs Gone Wild,” as per the E Online synopsis, “Scott gets jealous when Kourtney goes on a girls trip to Mexico for her birthday. Kim feels violated when some unflattering photos of her in Mexico surface on the Internet.”

Kourtney went on vacation on tonight’s episode of “Keeping Up with the Kardashians for her birthday however not everyone was going to be able to make the trip. Khloe for one had to stay in Cleveland for Tristan and so she had tried to go to LA before the trip so that she could hang out with them. But Khloe and Kim got into a bit of an argument with Kourtney over Scott. Scott had asked Kortney to also go on a family vacation with him and kids. So Kourtney had wanted to go and her sisters thought she was crazy for it.

They both knew that Scott had a problem with moving on though they think Kourtney makes it worse for herself by doing things like going on vacation with Scott after he found with another woman in Costa Rica. However, Kourtney thought her sisters were making a fuss out nothing. She said that she and Scott were going to be co-parents for the rest of their lives and so she didn’t see what the big deal was with a family vacation. So the sisters had tried to let to drop it and it turns out Kourtney was the next one to bring the topic up again.

Kourtney had later gotten papped with another man and she thought it was a good idea to give Scott a heads-up about it. Though Scott had completely freaked out and had said that he was going to beat up the boyfriend. So Kourtney felt that calling Scott had been a bad idea and she also realized it also wasn’t a good idea to allow Khloe to listen in on the conversation because Khloe then tried to tell her sister that Scott had crossed a line. He still believed that he should have a say about whether or not Kourtney dated.

But Kourtney thought the blew up was for nothing because the photographer didn’t even use that photo of her and the guy. So she tried to put that behind her and she allowed herself to have fun in Mexico while Scott stayed behind with the kids and Kris. Kris had wanted to do a camping trip in her backyard with the kids and she apparently had a very different idea of camping than what Scott was thinking. Scott was thinking that they were going to rough it out and Kris was actually talking about glamping which was glamourized camping.
So Kris was picking up things like fur throws and she had brought in a team to set up the tents. Yet, Scott wanted to do camping the old fashion way and so he tried to do everything himself even if Kris didn’t. Kris had brought in a chef to cook dinner and some snacks meanwhile Scott roasted some hot dogs over the fire with the kids and had later had fun with Kris when they all made smores. So the camping trip was a bit of both their styles and everything was going along just fine until Kourtney called in to check on everyone.

Kourtney had a lot of fun in Mexico and had told her mom about how she had thrown up in bed, but still slept in the bed because she had been too tired and that had made Scott uncomfortable. He wanted Kortney to have fun and had wished that she had been able to have fun with him. However, he had also made a joke about when he does it he deserves to go to rehab and how no one says that for Kortney. So Scott said he was happy for her and then didn’t want to answer her question or even talk to her when Kris turned her phone around to face him. And so Kris picked up on that.

Kris realized how hard it was for Scott to move on and so she had wanted to talk about it to Kortney. But Kortney wasn’t having it. She had gone on vacation to have fun and had enjoyed herself despite everything even if that everything included her sister Kim. Kim has had anxiety attacks since the Paris incident and she had first freaked out being in Mexico because she thought the group could be a target.

Seventeen girls went to Mexico and they all had this expensive luggage. So Kim was holed up in her room when they first landed because she thought that someone was going to come after them and she didn’t calm down until she spoke to family friend Joe Francis and he was able to validate her feelings. He’s been where she has and he told her that she was going to need time. Though merely speaking to him got Kim to leave the room and so she was able to have fun with everyone. And she chose not to post pictures as additional security measure.

Except the paparazzi still found out where they were in the end and they took pictures of her that looked nothing like her. So that ended up ruining the trip for her because that made her self-conscious and therefore she was genuinely happy to go home early. Yet, Kourtney had partied on and when she came back home she talked to her mother about Scott. Scott has been playing “poor me” for too long and so Kourtney told her mother she was sick of it. He was adult and needed to start acting like it.

So Kourtney might just forgo family vacations with him because now even Kris thought they were a bad idea!