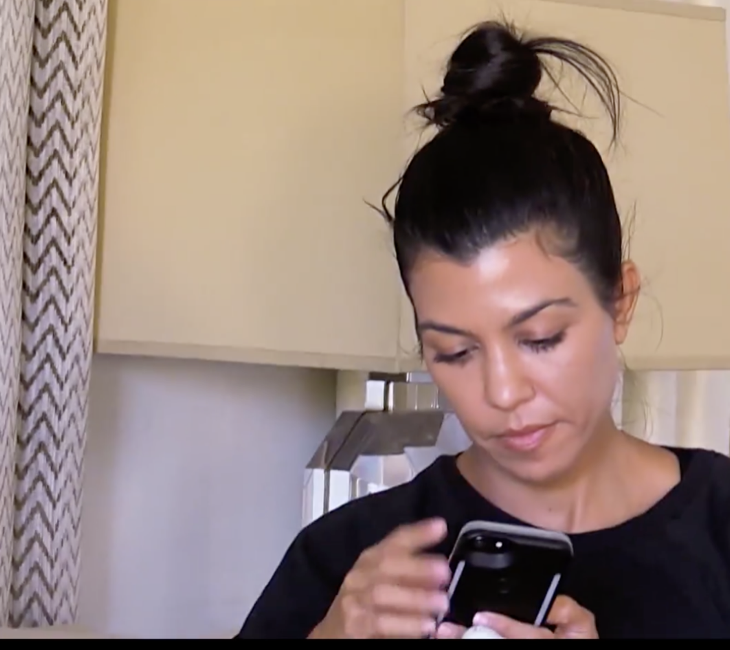 Tonight E!’s most-watched series Keeping Up With The Kardashians (KUWTK) returns with an all-new Sunday, November 5, 2017, season 14 episode 6 and we have your KUWTK recap below.  On tonight’s KUWTK season 14 episode 4 called, “Fan Friction,” as per the E Online synopsis, “Khloé fears that Cleveland fans may turn on her family during a trip to see Tristan. The girls wonder how to treat Scott after his behavior in Cannes, and Kim makes a lifestyle change..

Scott went a little too far… even for the Kardashians. The family had tried talking to him and they’ve also tried to warn him about his however that stunt he pulled in Cannes was low because he went on a bender. Scott went to Europe with the intention of grabbing headlines and he did that with a bunch of girls that were half his age. But he did all of that because he had wanted to “throw” it in Kourtney’s face. Like his sobriety and well-being should be taken for a joke if gets Kourtney’s attention and somehow makes her want to get back together.

But Kourtney was done. She wanted Scott to get better for their three children and thought he shouldn’t be around them when he gets like that. So Kourtney wasn’t interested in getting back together and her sisters that were usually supportive of Scott had had some question for Kourtney about her friend. Kourtney had a friend that seemed to be interested in her and she in him though she was still labeling him and so the family had questions. They wanted to know what was really going on between her and Younes and she said not much.

Kourtney admitted to Khloe that she and Younes almost hooked up, but that had been the same night she had gotten a call from Kim and knowing her sister needed her emotional support had killed the mood. But Khloe wanted to know if Younes was a “see when I see you” sort of thing or someone that Kourtney would comfortable about seeing outside of Europe. So Khloe had never got a clear answer about that one and she later dropped it because she had other siblings to see. And Kim had needed her for her last supper.

Kim wanted to eat healthier and possibly get abs. But Kim loves food. She’s a foodie and her best friend Jonathan is just as bad as her. So Kim said she wanted to chance and both Jonathan and Khloe decided to support her with one final treat day. They took Kim to have pizza from several famous pizzerias and followed a Mr. Softie truck until they could get a soft serve with sprinkles. And so it had been a great way to go out yet Jonathan didn’t think Kim was going to stick to her dieting and so she avoided once she did start to diet.

Kim knew she wouldn’t be able to stick to her diet if she saw Jonathan because Jonathan would have taken her to eat somewhere. But ghosting him hadn’t been working either. Jonathan would continue to call her and it was actually harder to ignore him than it was to stay away from sweets. So Kim did struggle with her diet and she hadn’t gone with the others when they went to visit Khloe in Cleveland, however, Kris had gone with Kourtney and the kids to Cleveland because she still hadn’t seen Khloe’s place out there and so Khloe had hoped Kris would be cool.

Unfortunately, Khloe’s hopes about that were a bit of stretch to begin with. There had been a game before Kris and the others arrived, but Cleveland lost and there were a lot of people out there that blamed Khloe as well as her family. The Kardashians have gotten this rap of being bad luck for whoever was dating them or married them. But that was of course not true and Khloe knew she had nothing to do with Tristan’s team losing. She just hadn’t wanted to talk about the game because she didn’t want to make things awkward and Kris merely didn’t get any of those hints.

Kris found out what happened and she had asked Tristan several questions. She asked him about his regimen if his beard was a good luck charm, and how he was doing. But Kris also asked Tristan if she could go to his next game because she wants to support him and not just his relationship with Khloe. So he said and she became one of his biggest cheerleaders. She and Kourtney went with Khloe and Tristan’s family and they all had a great time. And so the trip had turned out better than Khloe though.

The cameras had even gotten people from the crowd after the game shouting good things to the Kardashians and so that helped clear up the myth. But Khloe later went back to LA and there she had tried to heal the rift between Kourtney and Scott. Scott doesn’t understand why Kourtney was upset with him because he saw that she had been on vacation with someone else too. So he thinks it’s about the girls and the others has been trying to tell him that it’s more about the partying. And so the one person he should be telling him that was Kourtney.

Kourtney kept saying she was done, but she never wants to talk to Scott and so Khloe gave her that chance tonight meanwhile Kim was putting Jonathan through her exercise routine to see if he was fit enough to hang out with if he wasn’t going to give up his unhealthy eating.