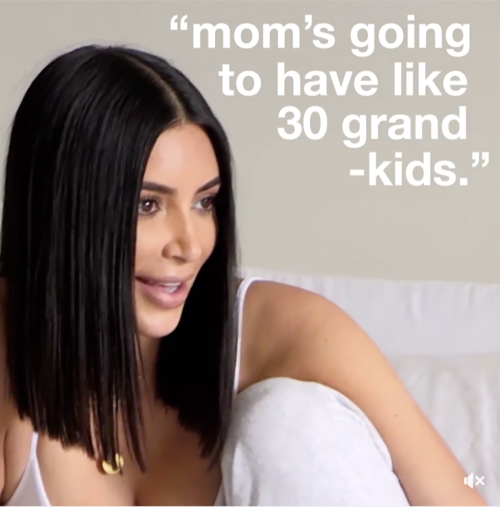 Tonight E!’s most-watched series Keeping Up With The Kardashians (KUWTK) returns with an all-new Sunday, December 10, 2017, season 14 episode 11 and we have your KUWTK recap below.  On tonight’s KUWTK season 14 episode 11 called, “Baby One More Time,” as per the E Online synopsis, “Grandma Kris is about to get some good news!”

Kourtney was learning French on tonight’s all-new episode because she claimed she just wanted to learn the language. However, everyone knew she was actually interested in French because her boyfriend knew the language and she wanted to impress him. So Khloe had made fun of her sister for that and for wanting to keep the whole boyfriend under wraps. She figured Kourtney shouldn’t hide having a boyfriend when it was an open secret to the family and so she tried to get Kourtney to let go of her secrecy for once though Kourtney didn’t seem like she was willing to budge and making fun of her could be entertaining for so long.

Especially as the sisters found out about their mom’s new favorite. Kim used to be Kris’s favorite and two had once been inseparable however Kylie has slowly supplanted Kim and now Kylie was the one that Kris was always talking about. But neither Kim nor Khloe who has never been the favorite were happy with Kylie getting all the attention from their mother. Kris was attending Kylie’s lip kit meetings and on the phone with her every day. So Khloe and Kim decided to reclaim their mother by competing with Kylie. Kylie did nice things for Kris out of the blue and so her sisters attempted to do the same.

Khloe had spent an entire afternoon reorganizing her mother’s pantry and that was something Kris had loved. Yet, Kim had gone out and picked up a cake from her mother’s favorite restaurant for her and that was also something Kris loved. So Kris quickly realized she was onto something good here with the girls all competing to become her favorite daughter because she was getting lots of great stuff. She had been treated to a massage by Kylie, given free cake, and her pantry (something she always wanted to be organized) organized for her. And so Kris decided to use their rivalry to her own benefit.

Kris talked about the many things one daughter would do for her in front of the other and that pushed them even more into trying. Take Khloe for instance who later took her mother shopping all day at Saks and the two had also managed to pick up matching outfits. Kris had loved that and had begun speaking about future mother-daughter days before they even left the store. So Kris was enjoying all the attention she was getting from her children because they were finally appreciating her rather than making fun of her yet there were still a few things that the sisters weren’t talking about to their mom.

Kim had agreed to go ahead with implanting an embryo in her surrogate because the surrogate had passed all her tests and so for a while, it was Kim had only told her sisters. She hadn’t wanted to tell anyone else because there had been a situation before Saint where the embryo hadn’t turned into a baby and so she had been afraid of that happening again. However, things with the surrogate were turnings out to be easier than the time Kim had and eventually Kim got the news that she had been dying to hear. She found out the surrogate was pregnant and couldn’t wait to tell her sisters. They have been through everything with Kim and were so happy that she was going to have another baby.

The only thing that could have made the timing better would have been their mother learning not to manipulate them. But that was not to be. Kris had apparently begun to make things up and therefore her claims about the massage as well as a toaster she received hadn’t been gifts from Kylie. They were mere lies and Kris told them to get her other daughters to give her stuff. So that plan worked for a while until Kim and Khloe confronted Kylie about kissing up to mom and Kylie had no idea about what they were talking about. She told them that she hadn’t been buying Kris anything and showed them all how much Kris had been manipulating them.

The sisters had been so busy one-upping each other that they failed to miss the signs and so they knew they wanted to revenge the moment they found out about Kris’s lies. Yet, they got decided to get their revenge using cake. They took the Hansen cake their mother loved and actually shoved it right in her face. So Kris had been shocked to get a cake smashed into her face and she didn’t see why her harmless little lies had gotten the girls so upset. She said she was just telling stories to get them to treat her better, but they knew she had been lying to get stuff from them and so they told her the jig was up.

But Kris still didn’t see what she did was wrong and so the cake incident proved to be a minor thing. Even the girls got over being upset and before long they were harping on Kourtney. Kourtney still hadn’t wanted to talk about her boyfriend and so Khloe confronted her about it because it was weird. She did the same thing with Scott and Khloe didn’t see what the big deal was. So Kourtney learned to back down some and Khloe had decided to lay off Kourtney