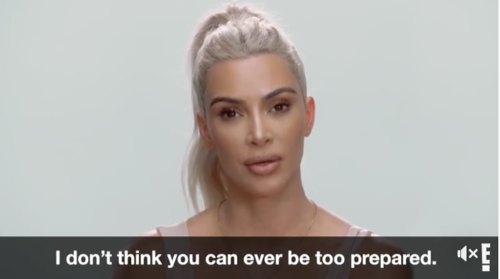 Tonight E!’s most-watched series Keeping Up With The Kardashians (KUWTK) returns with an all-new Sunday, December 17, 2017, season 14 episode 12 and we have your KUWTK recap below.  On tonight’s KUWTK season 14 episode 12 called, “Press Pass,” as per the E Online synopsis, “Khloé and Kourtney dispute over the design of their fitness line. Meanwhile, Kim thinks that the family needs media training to learn how to handle controversial issues.”

Khloe and Kourtney have been talking about doing a project together. They both enjoy working out and have even worked out together, however, tonight they seriously discussed making their own fitness video. They said their fans have always asked about their fitness routine and how they got their abs. So a fitness video was naturally the next step. The girls knew they could work together and they both thought a video would be fun. But Kourtney wasn’t that great at following through on some of her projects.

Kourtney would be enthusiastic about something in the beginning and then she would just sort of giving up. But Khloe hadn’t wanted that to happen with their fitness video because she wanted them to be like the Jane Fonda and Susanne Sommers of their generation. So Khloe decided to take the initiative. She went out and book a studio where they could practice what they were going to do in the final cut, but somewhere in the middle of practice, Kourtney decided that maybe they should focus on their fashion during their workouts rather than on the actual workouts.

Kourtney and Khloe had practice for a while and they had been playing around. They hadn’t been focused on what exercise does what for a person’s body and so Kourtney thought that wasn’t their strongest fields. But Khloe was already in the middle of a deal for a fitness fashion line and so she didn’t even know if they could do another fashion line together with her sister. A deal was a deal. So Khloe had said she would have to talk to her people about that and she later came back to Khloe saying that she had put that other deal on hold because she really wanted to work with her sister.

Khloe hadn’t been lying when she said she wanted to do something with Kourtney and so her decision to put another deal on hold meant the ball was firmly back in Kourtney’s court. But before the sisters started to hash out new plans, they agreed to Kim’s idea of going through media training. Media training was supposed to teach the family how to handle controversial topics and how to remain calm under pressure. So most of the sisters minus one Kylie went to media training and they learned a lot.

They learned how much they used “I think” in their interviews and that Kris really did have a great answer to what she did or didn’t know about Caitlyn’s transitions. But often Kris doesn’t say what she should be saying because she does doubt herself. She doubts whether she’ll have time to cover a topic and whether she’ll use the right words. So the media gurus that were teaching them had told Kris to just tell her truth because when she does do what she sounds authentic, but when she doesn’t do that she sounds defensive. And the others share that problem as well.

Kendall had been asked about the Pepsi commercial and the gurus had tried to talk her through it. But Kendall didn’t seem like she was on the same page. She had been told to reply honestly and say she never dealt with such a controversy before until “that” happened yet Kendall was still defensive on the topic. She hadn’t wanted to mention that was her first brush with controversy. Kendall just wanted to drop the topic because the backlash had been so brutal at the time that she doesn’t think her sisters have dealt with something like that. So Kendall wasn’t taking media training seriously.

Kendall had gotten so wrapped up in what was going on with her that she actually forgot about the session because she started to check her messages. The messages, unfortunately, turned out to be from Kylie because the two sisters were working on another project together and they needed to go over some things. But Kylie had apparently gone above and beyond on what they agreed. Kendall kept wanting to turn a small affair into something big and that wasn’t Kendall’s style. So Kendall got so upset by the messages that she stormed out of the session before it was over.

But the others though chose to stay. They had found media training to be helpful and Kris more than anyone was catching on how to answer questions. So Kris had managed to do very well when she later went to a real interview with Kareem Abdul-Jabbar and the two had laughed afterward because it had been that easy between them, but Kourtney and Khloe had picked up where they left off after media training and they agreed to go their separate ways. They couldn’t agree on anything and Kourtney knew she was horrible at following through on a project. And so Khloe eventually went back to her original fitness line deal because she knew she could depend on them.