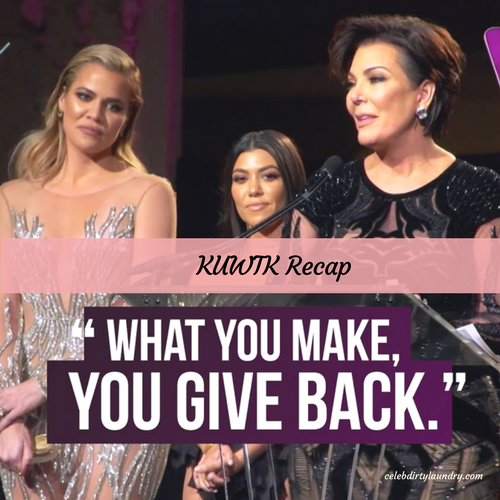 Tonight E!’s most-watched series Keeping Up With The Kardashians (KUWTK) returns with an all-new Sunday, April 16, 2017, season 13 episode 6 and we have your KUWTK recap below.  On tonight’s KUWTK season 13 episode 6 called, “When It Rains, It Pours Pt. 2,” as per the E Online synopsis, “Conclusion. After receiving some troubling news about Kanye while in New York for the Angel Ball, Kim rushes home to his aid. Meanwhile, Kendall worries that a bad review of the Kendall+Kylie Collection from Vogue could jeopardize her modeling career.”

This week on Keeping Up With The Kardashians Kim is reeling from the phone call from one of Kanye’s friends. He doesn’t tell Kim what’s wrong and Kim is freaking out because she is in New York for the Angels Ball. Kris asks her “Do you want to go home?” Kim says “Yeah. He really needs me right now.” Kris asks “Are you ok flying home by yourself?” Kim assures her mother that she will be fine. Kris tells her “I can fly home with you. Kendall and Kourtney can handle this.” Kim tells her mother to stay at the event for her father and heads home to Kanye.

Later that night at the Angel Ball Robert Kardashian is honored with a philanthropy award and the video that his daughters made is shown. Khloe says “Being at the Angels Ball is an honor. I know that Kim is overwhelmed, but I know that my dad is with her and he has her back.” Kris steps up and gives a short, but moving speech about Robert. After the ball, everyone heads back to LA.

Khloe and Kendall are very worried about Kim. Kendall says “My heart is breaking for Kim. I know that she and Kanye have been through a lot this year with everything that just happened in Paris and now this. I am very worried about them.”

Khloe is in Cleveland with Tristan for the Turkey drive. She is still worried about Kim, but her sister encouraged her to go to Cleveland and support Tristan the way she promised that she would. Khloe says “It’s incredibly hard to be away from my family at a time like this, but to be able to experience something that he is so passionate about it amazing.”

Scott and Khloe are hanging out with Scott’s kids. Khloe asks Scott about Thanksgiving. Scott says “It was weird. Not alot of people were there. Kim came, but she was kind of down and out and Kanye wasn’t there.” Khloe says “No one really knows what’s going on with Kanye so we are all trying to give Kim her space until she is sure and then she will tell us more.”

Kendall shows up at Kris’ house and Kris tells her “Vogue wants to review the Kendall and Kylie clothing line.” Kendall is both excited and nervous about the news. Kris tells her “You should be thrilled by this. Vogue usually only does this when they want to see what designers are up to.” Kendall says “I think it’s great that Vogue wants to review the line, but it’s something really personal for Kylie and I and if they don’t like it I would be devastated.”

Kim finally comes out to talk to her family. They are all curious about Kanye’s condition. Kim tells them “I don’t want to get into the specifics of it, but it is going to force him to take some much needed time off. It has seriously stressed me out over the last week.” Kris tells her “I understand because he is so vibrant and such a go getter he doesn’t want to take time off.” Kim says “Yeah. This makes things difficult especially since the robbery because I have been the one to stay at home while he has gone out to work.”

Kendall is worried about the Vogue review of the Kendall and Kylie clothing line. Kylie is trying to reassure her, but she doesn’t seem comforted.

Khloe and Kim are hanging out talking. Kim is still struggling with the issues with Kanye. She tells Khloe “It’s hard having him home. The kids are used to him being gone and he’s used to being on the road. I know he’s going to be fine though. He asked me if this is what they meant when they said for better or worse. I told him yeah. This is what a wife does.” Khloe is very worried that the stress is going to cause Kim to just snap. She says “The one thing I know about this family is that we are fighters. We don’t know how to do alot of the things we do, but we hang in there and keep moving.”

Scott brings dinner to Khloe’s house. He asks her “Don’t you want to come downstairs and eat it?” She says “No, I’m not hungry right now.” Khloe is upset because Malika has not been returning her phone calls lately. She says “I get that when you are in a new relationship you want to be around your man all the time but you can call a girl back or send a text saying that you are busy or something.”

Kendall and Kylie are preparing for their Vogue review with Nicole Phelps. Kendall says “I can’t read her face at all and I’m super nervous.” Nicole asks them “Who do you guys think is the Kendall/Kylie typical shopper?” Kylie says “We used to say it was the California girl. Now we say it is the everyday girl.”

Khloe is backstage getting her makeup done for the fashion show when Malika shows up and confronts Khloe. She tells her “You’ve been acting different lately.” Khloe is very angry when she hears this. She tells Malika “Did you not come to Cabo with us? I have been calling you and you haven’t been calling me back. You’re the one who’s been different since you got a boyfriend.” Tensions are definitely high between the two friends.

Kim comes into Khloe’s closet. Khloe tells her “Malika is fighting with me over some foolishness.” Kim tells her “I get it just because things aren’t at your beck and call.” Khloe tells her “She makes me feel guilty for not being here with her.” Kim says “You just have to tell her to get over herself.” Khloe says “I feel so bad complaining to you about this because it is so stupid in the grand scheme of life and you are dealing with things that are much bigger than this.” Kim says “No. It helps to get my mind off of things.”

Khloe decides to confront Malika about the things that have been happening in their friendship. She shows up at her house and tells her “I think we need to talk.” Malika asks her “Would you like to sit down?” Khloe sits and tells her “I have been there. I have tried to call you. You are the one who is not returning calls and ignoring me.” Malika tells her “You are always out of town and so busy you never have any time to really talk or hang out.” Khloe fires back “When I’m out of town I would have more time to talk.” Malika tells her “You’re happy and I don’t wanna put my crap on you when my relationship is falling apart is bad.” Khloe says “I would never want to not be your friend and I am always here for you.” The two women hug.

Kendall is shooting with Will I Am for his new headphones line. When she is done Kris shows her the Vogue review. She tells her daughter “I heard that they don’t give them this early. Kendall is very nervous as she reads through it. Vogue loved every single piece. Kendall says “I was bracing myself for a very bad review and instead we got a good one.” Kris tells her “You should be so proud.”

Malika, Kourtney and Kim are hanging out. Malika asks Kim “Are you done having kids?” Kim tells her “Me personally yes.” Malika says “So you’re going to have to find someone to carry them for you.” Kim says “We’re looking into options right now.”