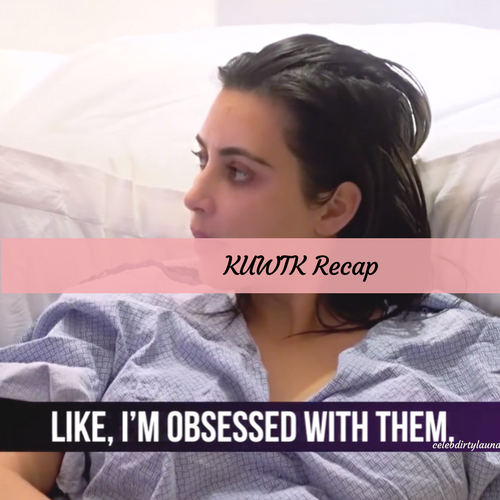 Tonight on AMC our favorite show The Walking Dead airs with an all-new Sunday, April 2, 2017, episode and we have your The Walking Dead recap below.  On tonight’s The Walking Dead Season 7 episode 16 called, “Kim’s Last Ditch Effort,” as per the AMC synopsis, “Kim Kardashians undergoes one final procedure on her uterus in an attempt to carry another baby but suffers from dangerous complications. Meanwhile, Khloe Kardashian worries that if her new denim line doesn’t meet high sales expectations, she won’t measure up to her sisters.”

This week on Keeping Up With The Kardashians Khloe is with Kylie and her friend Jordyn preparing for the launch of her new denim line. She says “This is so passionate to me because this is about breaking down barriers between sizes.”

Meanwhile, Kourtney is at Kim’s playing with North. She tells Kim “Mason got engaged and he literally tells me every day that he got engaged. I got her number so that you could talk to her mom.” Kim says “That’s so cute.” Kim wants to have another baby, especially after the robbery in Paris. She says “I want to make sure that my kids have a support system should I leave this earth sooner than expected.”

Rob and Chyna are expecting their baby. Khloe asks Rob “Are you ready for this baby?” Rob says “No, but I want our baby to grow up with the same Armenian values that dad taught us.” Rob talks about how he misses his dad and how his dad spent time with them all as a family. He says “I was the only one who was living with my dad when he died and I’m not close to the rest of my family because of my insecurities. I want to change that because I especially miss Khloe.” He tells Khloe “I want to have a poker night with Armenian barbecue.” Khloe laughs and says “That’s how you’re going back to your family roots?” Rob tells her “Yeah. I just want to get back to socializing and having family fun like we used to when dad was alive.”

Kim takes the kids over to visit Kris and she talks to her about the possibility of having more kids. This worries Kris, but Kim tells her “I am going to the Dr. to have my Uterus prepared.” Kris does not like the sound of this at all because Kim has been told that her next pregnancy will be high risk.

Rob brings dinner from Carousel over to Khloe’s house to have lunch with Kris and Khloe. Kris tells him “This reminds me so much of your dad.” Rob tells her “That’s why I did it.” When they sit down to have lunch Kris and Khloe start harping on Rob about his weight. Khloe tells him “Dad was active and hands on. You’re not active.” Rob gets really frustrated and gets up from the table and walks away.

Kim and Khloe are doing a press junket for the release of Khloe’s new denim line. Khloe becomes extremely nervous when she hears that she has to hit a certain number of pairs sold or else the line will be considered a failure. She says “This is the first time I am hearing that I have to hit an astronomical number of units sold. Emma is really good at her job, but I’m not sure even she can do this.”

Khloe and Kourtney are working out with their trainer Joe. Khloe can’t focus on the workout because she is worried about the launch of her denim line and the fact that she may not be able to hit her target number. She tells Kourtney “I was up at 5:30 this morning worrying about the number and the fact that no one has ever hit it.” Khloe also tells Kourtney “I have always been known as the fat sister. I don’t also want to be known as the failing sister.”

Kris goes to visit Kim after she has the surgery that would allow her to hopefully carry another baby safely. Kris asks her “How are you feeling?” Kim tells her “I hurt. It feels like my stomach has been ripped open. They won’t know whether or not it was successful until I heal up.” Kris tells her “Even if the surgery is success you still have to be careful.”

Kylie and Kourtney are hanging out. Kourtney is still really worried about her jeans line. She tells Kylie “I’m worried that if it fails I will let down all of these people who wanted me to be their voice.” Kylie tells her “You know what you’re doing. You’re a great business woman.”

Jonathon goes to visit Kim. He tells her “I still don’t understand why you did this.” Kim tells him “The Dr. told me let me do this extensive surgery to see if you can carry a baby.” Jonathon asks her “What’s the verdict?” Kim breaks down and says “The Dr. says for sure that I can’t carry another baby.” Jonathon asks her “How do you feel?” She says “The first full day I had a breakdown.” Jonathon goes with her to have the catheter removed, but she is nervous that she won’t be able to go on her own until she does. Kim says “I never thought I’d be so grateful to pee on my own. Now I just have to focus on the next steps in having a baby of my own.

On the day of Khloe’s Good American Denim launch she is extremely nervous. There are alot of people there including the press. Kris says “Ever since Paris it has been a bit of a challenge getting used to the new security rules, but Khloe just needs to focus on her launch.” Kris introduces Khloe and Khloe introdues the models. When the press conference is over everyone is excited about the jean line. Khloe says “Having people come up to me and be so excited about the line and tell me how great it is just made me feel like I was in a dream, but I was living my dream.”

Kim shares the experience of the surgery with Khloe and Kourtney. She says “I feel like the surgery was just a waste and it was painful.” Khloe tells Kim “I told you your pregnancies are alot.” Kim tells her “Yeah, but after Paris I feel the need to bring another soul into this world. ” Kim also tells them “Kanye is just happy the surgery is over and that I’m fine. I know he wants more kids though so we are going to explore our other options.” Kourtney asks “Do you want to do a surrogate or are you not sure?” Kim says “I think that’s what we are going to try. It’s so frustrating.” Both kourtney and Khloe tell her “I’m sorry.” Khloe then tells her “It’s good that Kanye is so supportive of you.”

Kris comes over as Scott, Rob, and Khloe are hanging out. Kris asks Khloe “How do you feel about the launch?” Khloe says “It’s only the second biggest launch in Nordstom history and they are sold out everywhere!” Kris, Scott and Rob are all very proud of Khloe.