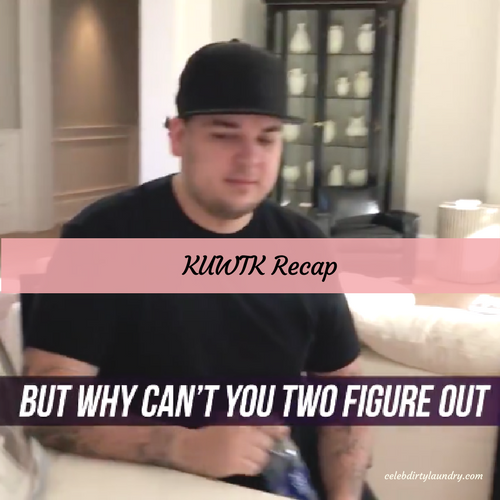 Tonight E!’s most-watched series Keeping Up With The Kardashians (KUWTK) returns with an all-new Sunday, April 23, 2017, season 13 episode 7 and we have your KUWTK recap below.  On tonight’s KUWTK season 13 episode 7 called, “The Ex Files,” as per the E Online synopsis, “After a fight between Rob and Chyna, the sisters feel a duty to protect their brother; Kris tries to rebuild her relationship with Cait; Kim tries to convince Khloe to hold onto her old mementos by making an ex-box”

This week on Keeping Up With The Kardashians Kim and Scott are hanging out she receives a text from Khloe asking what to do with her wedding photos. Kim tells her to make an ex-box in which she stores all the photos of her ex.

Kylie and Kendall are shooting photos for a new line today. Kylie has allowed Rob and Chyna to move into one of her houses. She receives a call from Kris. Kris tells her that Chyna has thrown something at one of the TV’s in her house. Kylie says “I feel like that is really disrespectful and I would never do that to someone else’s house.” After hanging up with Kris she calls Corey to find out what happened. Corey tells her “I had to go over there and get him out of there because she was being completely irrational.”

Later Kim goes over with Corey to check on Rob. He is very upset. Chyna has taken the baby Kim and Corey try to calm Rob down. Rob says “I don’t want people to think I’m suicidal, but she is just crazy.” Kim tells her brother “This relationship is just crazy. You’re so insecure that you think that she has the power and it’s really you that has the power.” Rob tells them “It’s just crazy because we’re supposed to be getting married but she is always running out on me. It’s ridiculous.” Corey speaks up and tells him “You need to stand up for yourself and stop letting her push you around. You’ve already seen that she isn’t ready to do this. Ya’ll need to just end it and be good parents to the baby.” Rob doesn’t like to hear that. He is still very upset. Khloe,

Khloe, Kourtney, and Kim are hanging out. Kim tells Khloe “I can’t believe you don’t keep an Ex box.” Khloe tells Kourtney “I want to see what’s in your ex-box.” They head upstairs and Kourtney pulls out all kinds of pictures and letters from her exes. Khloe has a blast reading the old letters. Kim says “I’ll show you mine and then you tell me what you think.”

Rob and Chyna are hanging out at a club the night after their fight. Rob says “Chyna does make me very happy. My whole thing in life is having a happy household. I want us to have a child together and not be together.” When the sisters see this they are not happy. Khloe says “Apparently Rob and Chyna are back together and that makes me very sad for him.” The three of them call him and confront him about the whole situation. Khloe tells him “She texted all of your sisters and told us that she didn’t like you because of the things that you do.” Rob explodes on his sisters and tells them “You’re all talking out of your asses.” He then hangs up on them. Kim says “Rob has this idea of a family that is the mom. the dad and the baby all together. I don’t think that’s going to happen for the three of them. I can’t keep going over there to rescue him every time the two of them have a fight.”

The next day the girls show up at Khloe’s house. Khloe is celebrating the fact that her divorce is final. Kim has brought her ex-box to show Khloe what she has put in it. Kim has the chicken nugget box from her first date with one of her exes. Khloe is a bit appalled by this.

Kris and Kendall are in the car when Cait calls and invites them both to come to her house and get facials. Kris is a bit leary about it, but she agrees to show up. Later everyone meets up for dinner. While they are sitting at dinner Kim gets a text from Rob asking them to call her. They decide to call him while they are all together. It does not go well. Khloe tells him “You have your head so far up Chyna’s ass…” Rob interrupts her and says “I don’t have my head up her ass.” He then errupts and says “I’m done.” He hangs up. The table explodes after this. Kim says “Giving them this show is a bad idea. It is toxic and I feel like the only reason he is doing it is to make her happy and keep her around.” Kendall says “The show has made Rob care about what other people think about him.” No one agrees about this situation at all and the situation just seems to be splitting the family apart.

Kourtney and Scott are talking about the situation with Rob, Chyna and the show. Scott says “There isn’t much he wants to do.” Kourtney says “Yeah, but it’s not a good idea because their relationship is just not healthy.” Scott asks “Does he want to do it?” Kourtney says “Yeah, but he wants to do it for the wrong reasons. I don’t think it would be healthy for the two of them to be around each other all the time.” Rob heads over to talk to Kris about the situation. He tells her “You have no idea what the situation is with us today. We’re good today.” He talks to her about all of the things he is focusing on including working out and spending time with Dream. Then he says “She’s working on herself too.” Kris says “I love my kids and I want them to be happy, but there comes a time when I have to step out of the middle of things.”

Caitlyn decided to take Kris up on her offer to come over for a glass of wine. She tells Kris “Upstairs there is a gun.” Kris is incredulous. She says “I asked you when you left if you wanted to take anything and you said no. Now you want a gun?” Caitlyn says “The only problem is that the gun is registered in my old name.” Cait also brings Kris a copy of her new book. Kris is reluctant to read it. The sisters

The sisters receive an email from Rob asking for a second season of his show. Kourtney says “I think there need to be some boundaries with the show. For example if he doesn’t start going to therapy once a week then the show is done.” Kim says “I feel like if there was no show there would be no relationship.” Kourtney says “I just want Rob to be happy.” The sisters agree to sit down with Rob and try to hammer out some conditions to get him a second season of Rob and Chyna.

After reading the book Kris is very upset and disappointed. When Kim shows up and asks about the book Kris unleashes. Kris says “I really tried hard to improve the relationship and open up my home and my heart to someone who doesn’t care. I’ve never been so angry with someone in my entire life. I’m done.”

Rob meets up with his sisters Kendall, Kylie and Kim at Kim’s house to talk about the situation with Chyna. Rob tells them “I just envision being with the person I had the baby with.” Kim tells him “You are trying to figure out how to deal with your relationship with another person in the mix. Instead of doing a show you should be working on yourself.” Rob tells them “You all have been through situations where you look back and think man those situations are really messed up.” Kendall tells him “I feel bad that we’ve been fighting. None of us wants to tell you what to do in your relationship as long as you’re happy.” Rob tells them “I want to be with her.”