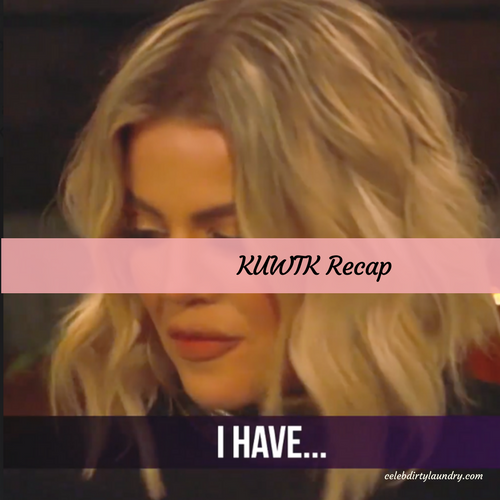 Tonight E!’s most-watched series Keeping Up With The Kardashians (KUWTK) returns with an all-new Sunday, April 9, 2017, season 13 episode 5 and we have your KUWTK recap below.  On tonight’s KUWTK season 13 episode 3 called, “When It Rains, It Pours,” as per the E Online synopsis, “Part 1 of 2. Kim begins to ease back into her public life but is blindsided by some upsetting news about Kanye. ”

This week on Keeping Up With The Kardashians Kim is making her first public appearance since the robbery in Paris at Kanye’s concert in Los Angeles at the Forum. Kim says “The plan was always for me to go on pretty much the entire tour and I feel bad that I have been hiding at home, but I feel safe at the Forum since my aunt and uncle pretty much own it.” Kanye’s performance begins and Kim is nervous about being around all of the people. She says “I just want to disappear for a little bit.”

After the concert, the family goes out to celebrate Kendall’s 21st birthday. Khloe is still upset with Caitlyn for the way that she handled her transition. She says “She hurt her children and my mom with the way she handled things and at the end of the day I will always be team Kris Jenner.” Conversation at the table is very stilted. Caitlyn tries to engage Khloe but she is very standoffish.

Jonathon, Kris, and Kim are talking. Kris mentions Jonathon’s move to Miami and he tells her that he is moving in December. Talk then moves to a cancer benefit at which their father Robert will be honored. Kim is still reluctant to go. She tells kris “I don’t know if I’m going to go. I still feel very nervous about being around people.” Jonathon tells Kim “You need to get out of the house.” Kris agrees with him and says “It would look weird if you didn’t go to the event.” Kim is still very nervous and unsure.

Later that day Caitlyn calls Kris to talk to her about the situation with Khloe. She tells Kris “I haven’t really spoken to her in a month.” Kris tells her “Khloe has been in Cleveland and everyone has life changing stuff going on.” Cait says “I could be out of my house for a month and not hear from any of the kids.”

The family is all together celebrating Kris’ birthday minus Kim because she is still too afraid to go out in crowds. They are all having a great time when Rob calls them and tells that China has gone into labor. Khloe tells him “If you’re lying i am going to strangle you by your balls.” Kris wonders if she should go to the hospital. Rob tells her “Don’t come to the hospital. Just stay and celebrate your birthday.” He then hangs up the phone. A few seconds later he texts Kris telling her he was joking.

Kim, Khloe and Kourtney are watching videos of their dad with North and Saint. Kim is stil going back and forth about going to the Angel Ball to see her father being honored. She says “Maybe I should be there to see dad be honored.”

Scott and Kourtney are on their way to the hospital later the next day to see baby Dream. Kris says “One of the greatest honors of my life is being in the room when my grandchildren were born and today is no different.” Meanwhile, there is a lot of speculation about the relationship between Kourtney and Scott.

Later that day Caitlyn and Khloe meet up to try and hash out their issues over Cait’s transition. Cait tells Khloe “I hardly hear from any of you and it makes me wonder what I’m doing wrong or what I did wrong and whether or not you love me anymore.” Khloe tells him “It feels like I lost my second father and I wasn’t in a place to start building new relationships. I felt like you two needed to sort some things out.” She also tells him “My second dad was taken away and I have to adjust to that. Now I’m getting accustomed to that.” Caitlyn says “I want you to know that our relationship is important to me and I want you to experience some of my life now.” Khloe tells her “Good. I want to be part of your life and I do love you.” The two come to a truce and agree to work on mending their relationship.

Scott goes to visit Khloe and Khloe asks him “Did you and Kourt kiss on the lips?” Scott is embarrassed by the question. He says “No, well I probably did, but she didn’t.”Khloe laughs and says “That’s ok. I’ll ask her and she’ll probably say no way!” Kourtney joins them and says “Scott told me that my best years were behind me, but I told him that I still had ten good years left and he only said that so that he could use them up and try to get back with me.” Scott looks shocked and denies saying anything and Khloe just laughs. Khloe asks Scott “Do you see other people?” Scott says “No, although technically I could.” Khloe then asks “Are you over Kourtney?” Scott says “No. I’ll never be over Kourtney. She’s my first love, but I’m trying to move on.”

Later Khloe is hanging out when Kim walks in and tells her sister “Kanye walked off stage last night.” Khloe is hanging out with Kourtney and Penelope. She tells her sister “I spoke with Scott and he told me that you guys are on the verge of working things out.” Kourtney says “We’re not.” Khloe says “It doesn’t seem that way to Scott. He thinks you guys are on the verge of getting back together.” This seems to exasperate Kourtney. She says “He has asked me if I want to go to therapy to work on things and I told him no. I told him that we need to make sure that we are ok alone and that I am living my life right now.”Kim is frustrated that Kanye has had to cancel

Kim is frustrated that Kanye has had to cancel twenty-one shows on his tour due to voice issues. Kim is at home with Kris and Kourtney when she receives a phone call from Kanye’s friend who is delivering devastating news. What can the news be and how will it affect Kim and Kanye’s life and the lives of their children?