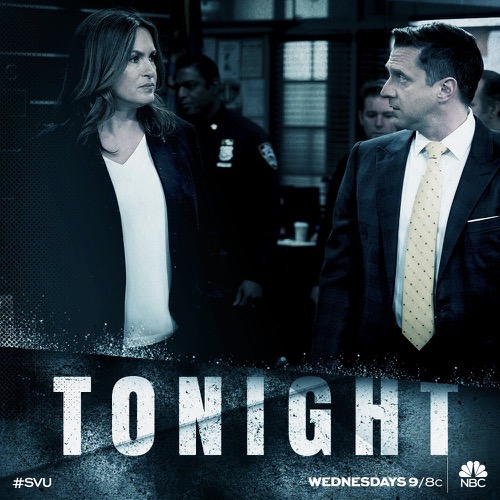 Tonight on NBC Law & Order SVU returns with an all-new Wednesday, May 24, 2017, episode and we have your Law & Order SVU recap below.  On tonight’s Law & Order SVU season 18 episode 20 & 21 as per the NBC synopsis, “In the first half of the Season 18 finale, a hate crime is committed against a Muslim family, resulting in a death, and then a crucial witness in the case is deported. In the second half, public protests on the matter escalate to violence..”

Several masked men break into a restaurant and attack a couple of Muslim sisters in their family run business. Olivia and the team arrives to find one dead and the others raped. It’s a hate crime. They return to the precinct. Chief and Olivia watch video footage. News comes in that the two sisters are in stable condition. The team breaks out into couples to hit the streets and investigate. Carisi talks to a local shop owner who is angry that they have questions about their activity.

Olivia is at the hospital talking to the mother who details the horrific attack. The suspects sounded like New Yorkers. They tied them up, started breaking things. They wanted money. She felt helpless as her daughters were attacked. One of the men whispered something to her. A doctor comes in an interupts. There is something wrong with her husband.

Alison talks to the surviving sister. She tells her that her father has died. The sister explains that she has a Muslim fiancé who is very conservative. He won’t want her now. She wants to talk to her mom.

Fin tells Carisi that he has spotted tracks in blood. They are looking for a size 10 shoe. None of the suspects wore a size 10.

A couple walking their dog comes in to the station to report that they saw a younger man running from the restaurant that night. He was running fast. Someone else was there. Liv and Fin visit the mom and sister. The sister shares that her uncle Yusef has a key. The mother shares that she took it out. Liv wants to know where he lives. They track him down, but he runs. When they get to him, he explains that he had nothing to do with the murders and rape. He is scared and running because he is an illegal immigrant and he is gay.

Back at the station, Yusef says that he was there. He was scared and afraid. He came in the back door and he saw three men in masks. He hid. He should have grabbed a knife. He did see one man, who took off his mask. He looked familiar. Maybe he used to work at the restaurant.  His sister comes in. They talk. He apologizes. She forgives him. Liv comes in and asks about her past employees.

The family recently had a family party. Yusef Ids a man named Hector. They go to his house. His wife lies about his whereabouts. They will take her to the station. She tells them he is working at a new restaurant. They head to the place and find Hector washing dishes. He tries to get away. They take him in.

He pretends he doesn’t speak English. They offer him a glass of water and he responds. Carisi asks him about the family and how he was fired. He explains they still owe him money. Carisi accuses him of going to the restaurant with the other man to get revenge. It looks as though things went wrong. Just as Hector looks like he is going to talk his attorney comes in. Yusef ids Hector. Liv and Fin sit down with Hector and his lawyer. He refuses to talk. They arrest him for rape and murder as well as a hate crime enhancement.

Carisi goes home with Yusef to make sure he is safe. They go to the store together so that Yusef can get cigarettes. There is rioting outside. The police show up. Yusef gets nervous and starts to run. They stop him and take him away. Carisi tried to stop them but they don’t listen.

Liv and Carisi arrive at the immigration office. An agent they speak with wants a warrant. Olivia threatens him. She wants to see his boss. They find out that Yusef has been deported to NJ and then to Syria. Without him, Hector walks. Barba holds a press conference. Civil unrest breaks out outside of the courthouse. The mother and sister arrive at the station. They are angry that Olivia promised Yusef would be safe.

The team gets a call. Hector is being held at gunpoint by two men in a bar. The cops surround the place. An officer takes a shot and kills one of the hostage takers. Hector is put in the back of the cruiser. Liv gets in and talks to him. The two men put a gun to his head for the rapes and murder. His lawyer shows up. She is angry. She takes Hector with her.

Carisi and Allison pay Hector’s wife a visit. They try to get her to supply information. It is best for her kids. She gets angry and kicks them out. Liv and Fin go to see the mother and the sister. The mother recalls seeing one of the men come in that night and shut off the security camera. It must have been Hector. Barba tells them to bring Hector’s wife in. Threaten her with deportation. She arrives. Liv tells her what is going to happen if she doesn’t cooperate. She breaks when Liv picks up the phone to call ICE. She will tell them everything.

Hector is brought in. Fin and Carisi sit down with him and his lawyer. He finally tells them that he was drinking and he was angry. He wanted the money they owed him. The two guys he was with went with him to break some things, cause some trouble when things got out of hand. They bring in the two. They both deny any doing.

They are all brought in, indicted in front of the grand jury.

Hector takes the stand. He details the night. After the hearing, Barba holds a press conference on the court steps. Shots are fired. The crowds all hit the ground. Hector has been shot dead. He was their only witness.

Carisi and Allison calls in one of the suspects’ wives. Allison tells her that she needs to cooperate for her son. She won’t budge. The mother comes in to the station. She saw the men that night but she was too scared to say anything. She wants to testify now that they are behind bars. She will take the stand. The next day, she takes the stand. Barba questions her. The defense asks questions next. They accuse her of changing her story. They believe that she never saw their faces. She tells the jury she did see their faces and told Olivia about it. Olivia looks horrified. Barba catches her outside during a recess. Barba tells Liv she will take the stand next and she should do what she thinks is right.

Later that day, Chief visits Liv at home. He tells her that no matter what decision she makes he will cover her. The next day, Liv takes the stand. She tells the truth. She leaves the courtroom. Outside, the mother and sister are angry. They lash out at Liv. One of the suspect’s wives sees it all. She talks to Liv after. Liv tells her that she knows what kind of man her husband is, that he did it and that he has hurt her and he is a rapist. The wife takes the stand tells the truth. The mother and sister get justice.

Barba goes to visit Liv. He asks her to go celebrate. She says she needs to go home. Barba can tell she is disenchanted with him. She admits she is. The chief comes in. A mosque was just firebombed. Five dead. They all sit in silence.