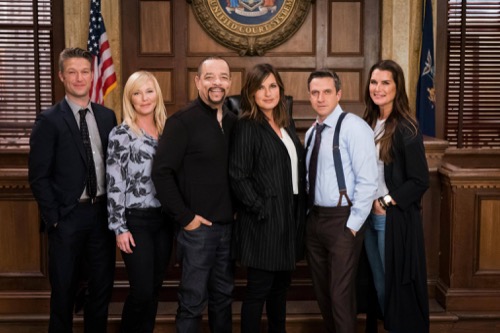 Tonight on NBC Law & Order SVU returns with an all-new Wednesday, October 25, 2017, episode and we have your Law & Order SVU recap below.  On tonight’s Law & Order SVU season 19 episode 5 as per the NBC synopsis, “A teenager disappears after schoolmates make her the subject of a vicious cyberbullying attack.”

The show opens with Olivia talking to Noah on the telephone as she enters the family courtroom to discuss Noah’s custody. Noah’s grandmother, Sheila, says she has been searching for her daughter for years and she wants to make amends by having a relationship with Noah. While she knows she probably can’t nullify the adoption she thinks she has a right to have a relationship with Noah.In

In Central Park, a young woman runs up to a police officer begging for help. She is hysterical and says a man is after her. He calls for back-up. Carisi and Rollins meet a Dr. in the ER who say the girl doesn’t know her name or how she got to the park. She says she was forced to have sex and there are definite signs of abuse including cigarette burns and burns from drain cleaner. She won’t let anyone touch her. The detectives try to talk to her but she is still hysterical.

Olivia arrives at the station and Finn fills her in on the girl at the hospital. They watch through the two way glass as Carisi and Rollins interview the woman. She tells them she escaped from a white van driven by Steve. Steve isn’t her dad but she has lived with him for as long as she can remember. Steve made her have sex with him. She tells them she had a new dress for her first day of kindergarten. After school, she and her brother went to the park and Steve grabbed her from there. Carisi and Rollins find a newspaper article about a 6-year-old girl named Emma Lawrence being kidnapped 10 years ago. They think this girl is Emma.

Rollins and Carisi go to talk to Emma’s parents. They show them a photo and they are sure it is their daughter. The come to the station to meet the woman. She tells Olivia she doesn’t know them. Emma’s mom shows her a photo. Emma says she remembers them and calls them Mom and Dad. She also remembers Glenn. They tell her they want to take her home. Finn brings Olivia footage from a camera in the park. The girl didn’t escape from a white van. She took the subway to the park. Olivia says there are a lot of reasons she could not have told the whole truth. They both hope they haven’t made a mistake.

Olivia meets with Barba to get him up to speed about the case. She just isn’t sure what the truth is. Olivia tells him about the situation with Noah’s grandmother. She has filed for visitation rights. Olivia just doesn’t know what to do. She wants to do what is best for Noah but her instincts tell her not to allow visitation. Emma and her family hold a huge news conference to welcome her home. Isaiah Thomas joins the family to present a jersey to Emma. Carisi and Rollins meet with the family and interview Emma. She offers a lot of conflicting information and gets upset. The family asks them to leave.

Carisi finds an arrest warrant with a photo of Emma. This woman’s name is Britney and she is 21 years old. She had a cigarette and chemical burns on her arm. She isn’t really Emma. The family gives an interview on a talk show and the detectives think the brother Glenn is acting strangely. They decide to interview him. Rollins finds him in a bar and tells him he can trust her. He acts very strangely and they decide that they need to get Britney out of that house. They go to the house and arrest Britney for the outstanding warrant.

She admits that she isn’t Emma. She made up the story after she saw a story on the news because she was homeless and needed a place to live. Glenn knows she isn’t really Emma and wants her to stay. He told her Emma is never coming home. Emma meets Glenn in a diner and the police listen in on their conversation. She asks Glenn if Emma ran away but he says no. He admits there was an accident and he didn’t mean it. Finn and Rollins play the tape for Glenn. Glenn tells them Emma was dancing in front of the TV and won’t move. He grabbed the couch cushion and pressed down on her until she stopped breathing. Rollins asks him who helped him get rid of the body. He was just a little boy. He couldn’t have done it himself.

Rollins and Carisi go to the family’s home and arrest the father. Barba tells the judge he is willing to agree to the plea bargain if the father will admit to the crime. The father tells the court he loved both of his children equally. When he found that Emma wasn’t breathing he performed CPR but she was dead and he saw his son’s life disappear before his eyes. As he talks, a team with a dog find Emma’s body. The father says he has never regretted his decision and asks his wife for her forgiveness. She leaves the courtroom. Olivia goes to talk to her. She wishes they have never found her. At least she used to have hope. Now she has nothing. Olivia meets with Noah’s grandmother. She tells Olivia, Ellie was a normal teenager until she starting using drugs. Her husband told her they had to show tough love. Her husband died a year after Ellie ran away. Olivia invites Sheila over to meet Noah. Things go well and they read books together.