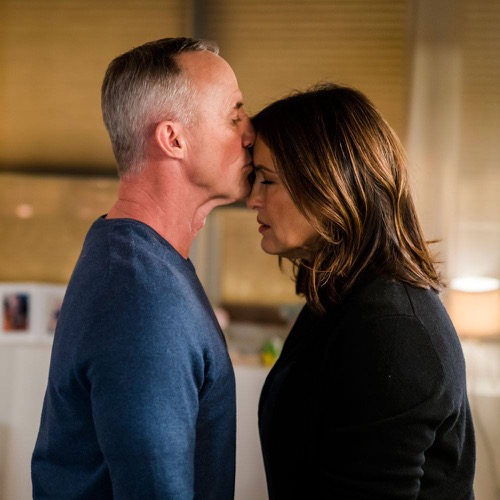 Tonight on NBC Law & Order SVU returns with an all-new Wednesday, January 11, 2017, episode and we have your Law & Order SVU recap below.  On tonight’s Law & Order SVU season 18 episode 8 as per the NBC synopsis, “ 6-year-old vanishes in the middle of a wild party his mother was hosting, and the search for the child leads Benson (Mariska Hargitay) to reflect on her own role as a parent.”

Tonight’s episode of Law & Order kicks off with 6 year old Theo getting tucked in to bed by his nanny Gloria. After Gloria leaves, Nadine tells Theo to put on his headphones because she is having friends over.

The next morning Gloria arrives for work and freaks out when she realizes that Theo is missing – he’s not in the house. Nadine and her friends were up all night getting high, and have no idea where they little boy went.

The police arrive at the house, and Rollins and Carrisi are shocked by all of the pills and coke laid out on the livingroom table. Nadine explains to Rollins that she checked on Theo at 2:30 in the morning, and he was sound asleep.

Nadine explains to Rollins that she checked on Theo at 2:30 in the morning, and he was sound asleep. Carrisi interviews Nadine’s friend Cat, she says she was in bed with Nadine all night.

Olivia arrives and Rollins briefs her on the case so far. They found a drop of blood in Theo’s room – and his carpet is missing.

They bring Nadine down to the police station to question her. Nadine thinks they should talk to her ex-wife Fran, Theo was a “sperm donor baby.” There was another shady guy at the party named Kevin Dorsey, he kept taking pictures of her house on his phone and she kicked him out.

Carrisi and Fin track down Kevin Dorsey. He explains that he is actually a private investigator, he was hired by Nadine’s ex-wife Fran, she was I the process of suing for custody of Theo and thought Nadine was an unfit mother.

It looks like they are back to square one – Fran thinks that they should look at Nadine’s many boyfriends. It turns out she was dating a violent drug dealer named Gabriel, they check Theo’s room and find some of Gabriel’s fingerprints.

In the middle of the investigation, Ed shows up at the police station, he’s worried about Olivia. Just last week she had to shoot and kill someone – Olivia reassures Ed that she is doing fine and turns down his offer to get coffee.

Rollins and the team head to Gabriel’s apartment – they find a room full of kids toys and clothes and then realize that Gabriel made a run for it out the back window. They chase him down the street and catch him – he’s packing a pistol, but swears he has no idea where Theo is and didn’t even know that he was missing.

They bring Gabriel down to the police station, but he still swears that he is innocent. He says Nadine dumped him two months ago and he hasn’t been back to her apartment since.

Rollins catches a break, they find a street security camera showing a guy loading a rug in to a van – it looks like someone we may be rolled up in the rug. Nadine doesn’t recognize the van or the grainy photo of the guy.

They catch a break – it turns out the van in the picture is linked to Gloria [the nanny]’s brother Oscar. Olivia and her team rush to Gloria and Oscar’s house, but no one is there. They do however find a creepy shrine that Gloria has set up in her room, full of pictures of Theo.

Fran and Nadine are shocked, they insist that Gloria was harmless – she has worked for their family since Theo was a baby.

Carrisi and Fin track Oscar down at work and bring him in to precinct. Oscar confesses that he took Theo, but insists that he just did what Gloria said. He confesses that his sister just bought a used car – they put out an Amber Alert on the car and license plate numbers.

It’s not long before they get a phone call from a motel, the desk clerk says that Gloria checked in with Theo the night before. They find directions written down on a piece of paper in the room and realize that she is heading for the border and taking Theo back to Mexico.

Olivia and her team find Theo and Gloria at a gas station down the road. Theo and Gloria try to make a run for it, but the police chase her down and take Theo away as Gloria is arrested. Theo doesn’t exactly seem like a victim – he wants to stay with Gloria.

At the police station, Gloria explains that she was taking Theo away with her because Nadine didn’t take care of him. Theo backs up Gloria’s story, he wanted to go with Gloria.

Social Services takes Theo until the judge can determine if Nadine is a fit parent and can have him back. Nadine and Fran make amends and agree to speak to the family court judge as a united front to increase their chances of getting him back.

After the case is closed, Carrisi invites himself over to Rollins’ house to make her and her daughter spaghetti and watch television.

Olivia heads home to Noah and Tucker. After Noah goes to bed, Liv and Tucker have a long overdue talk about their relationship. Tucker can feel her pulling away. Olivia explains that she has to give

Noah all the time and love that she has – and there isn’t enough to go around. Ed understands, and they say their goodbyes.