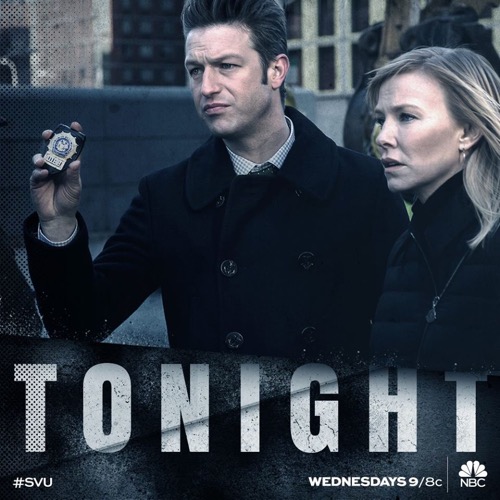 Tonight on NBC Law & Order SVU returns with an all-new Wednesday, February 22, 2017, episode and we have your Law & Order SVU recap below.  On tonight’s Law & Order SVU season 18 episode 12 as per the NBC synopsis, “Top youth hockey players are investigated by the squad following a violent hazing incident in a locker room.”

Captain Beth Williams is the face of Army 2.0. She is headed on a 2-month media tour. At a party to celebrate her coming home, Beth gives a speech. Her strength is her family, her friends and her home.

A jogger on a night run sees a trail of blood. A woman up ahead is dragging herself across the ground. Benson and Fin arrive to the scene. Beth’s dress was ripped, her underwear pulled down. Benson learns that she is a captain, the first woman to graduate ranger school, who did multiple tours.

Next day, Carisi shares with Benson and Fin that Beth’s backpack was found. She had $5k in it. They head to the hospital to talk to her. Amanda’s at the hospital. Beth has plenty of defensive wounds and she can’t remember much. Amanda questions Beth’s mother. Olivia visits with Beth. She is crying. Benson asks her if she knows who did this to her. Beth shares that this is the worst time right now to have something like this happen. She is headed out on a book tour. Beth wants to talk to her superior officer. The doctor comes in and takes her for tests.

Carisi talks to Beth’s boyfriend. He stayed at the party. Beth went home. She didn’t want him to leave. He stayed an played X-Box with his friends. Carisi tells him he needs a seaman sample from him. He agrees.

At the station, the team does some research online. There is plenty of threats and hatred towards Beth. Major Dantely arrives to talk to Benson about Beth. He is there to do damage control in regards to the media. Carisi interrupts, the rape kit came back. There is no other seamen other than her fiancé’s. There was blood on Beth’s body.

Carisi and Benson pay a visit to the owner of the blood. He shares a fight club video of Beth beating him in a makeshift ring. They bring him down to the station. He did not rape her, he had respect for her because she kicked his butt. He left right after the fight. His wife took him to the doctor.

Benson returns to see Beth. She still doesn’t remember any of the details. She is still foggy. Benson asks her if she remembers being at the fight club. Beth admits she was there. She had to make money quick, her mom has Parkinson’s. She left at 4:26 am. She was alone. Benson is compassionate, but Beth sees it all as her fault. As a ranger, she should stay alert, vigilant and morally strong. She failed. Benson is going to find the person who is responsible. Beth asks what her mission is. To heal, Benson tells her.

Carisi and Amanda pay a visit to Beth’s old martial arts club. Her teacher sleeps in a loft in the gym. His girlfriend was with him all night. An online troll becomes a suspect. He goes by the name of Superman78. His real name is Gary Cook.

Amanda arrives to his address to take him in. He tries to run. Carisi takes him down.

At the station, Cook admits that he saw Beth after the fight. H was having a smoke. He shook her hand. He cherished woman. He didn’t hit Beth with a rock. She shouldn’t be fighting at a club at 4 in the morning. Woman shouldn’t do that. After he shook her hand he left and paid a visit to his grandmother.

Benson and Fin head to the hospital. Beth is on her way out. They want to show her a photo of Cook. She recognizes him. He was smoking outside the fight. He followed her after the fight. She confronted him, shoving him and telling him to back off. He appeared to have left. When she was near the subway, she knew he was following her again. Fin tells her to stay another day, get some R&R. She leaves anyway to visit her mother.

Cook has an alibi. He signed in to visit his grandmother. There are 2 witnesses who saw him there. Video evidence also shows Cook was telling the truth. He shook her hand and walked in the opposite direction.

Benson heads to Beth’s house. She asks her why she is accusing Cook if he wasn’t there. She must have made a mistake. She is leaving on her book tour tonight. Duty calls.

Fin and Benson head to Major Dantley’s office. They want him to keep Beth in town longer. Fin thinks it’s about negative media. Dantley just wants her to get back to the base, to her job.

Carisi and Amanda pay a visit to a local bar. They find a receipt that Beth’s boyfriend, Micky, signed. He was at a bar near where Beth was raped. He wasn’t playing video games. He lied. They head to Micky’s house. His friend was covering for him. Micky was out all night drinking after Beth broke up with him after the party.

They head to Beth’s house. She is beating Micky in the basement. Benson stops her. She cries. Micky is laying on the ground, bleeding.

Benson tells Beth that her vigilante justice is illegal. It is not up to her to decide to press charges. They plan to prosecute. The next morning at court, Micky pleads not-guilty. Beth doesn’t show up. Benson calls to locate her. She is at Hamilton Military Base. Benson pays her a visit. Beth let Micky do this to her, she isn’t a role model. Benson pleads with her to testify. There is a freedom with coming forward. Rangers lead the way. Beth decides she will testify. She reports to a press conference where she tells the truth. As she gives her speech, she smiles at Benson.