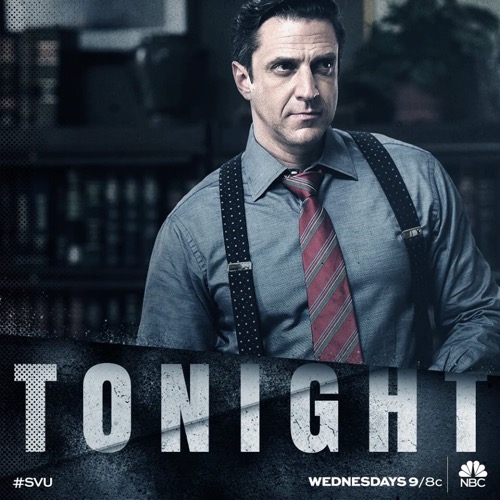 Tonight on NBC Law & Order SVU returns with an all-new Wednesday, March 22, 2017, episode and we have your Law & Order SVU recap below.  On tonight’s Law & Order SVU season 18 episode 13 as per the NBC synopsis, “An investigation hits a nerve with Benson when a suspect claims his genetics causes him to commit rape.”

It’s night, the team arrives to the scene of a rape. The woman is shaken. She didn’t see the man who attacked her. But she heard his voice. He apologized to her after raping her. He told her that he was born to be a rapist, it was in his genes.

At the hospital, the rape victim Jessica recounts her story to Olivia. Jessica thinks she knows who didn’t it. A persistent customer from the bar she works at whose name is Rodney.

The team heads to Rodney’s place of business, a car dealership. They ask him what happened with Jessica last night. He recounts how he asked her out twice, once in the bar and once when she was walking to her car. He never raped her.

The DNA results have come back. A man in Sing-Sing is linked to Jessica’s case. It could be one of his feeling members. He offers up his brother Nick’s whereabouts. They pick him up. Before they bring him to the station he admits that he raped Jessica. He was born a rapist.

At the station, Nick recounts his story with a lawyer by his side. He wants a leaner sentence for the information he can give them about a serial rapist. He gives them details only police would know.

Olivia is at her therapy session. She discusses Noah. She is worried about him turning into his father because she was afraid she would turn into her father who was a rapist. She still worries that somehow her father’s darkness will overpower her life. She has been angry and violent before. He tells her that there is no such thing as a rape gene.

Nick takes Rape 2 for the information he provides about the serial rapist. He knows where the rapist, Sam, will be tonight at 10. Nick leads the team to his meeting. They stay outside, listening through the wire Nick is wiring. In the meeting, Nick confesses to raping the bartender. Sam shows up to the meeting late. He tells the group that he feels like he turned a page. He went on a date last night with a proper woman. Nick’s questions make the group nervous. One of the members pulls a knife on him, asking him if he has turned into a snitch. The team comes in with weapons raised.

All the men from the rape therapy group are brought down to the station. The head of the group will not answer questions about Sam Dalton. Another member Will also refuses to answer questions about Sam. Olivia watches all of the interviews with sadness. They bring Sam into the questioning room. Olivia asks him if he wants to confess all of his guilt and shame. It will make him feel better. He humors them. A thick steak will make him feel better. He gets up to leave, to go home. They arrest him for trespassing, attending the meeting in a warehouse and for having marijuana on him. Olivia questions three of his rape victims. They all want to talk. The DNA has also come in linking Sam to all three woman. Unfortunately, his conversations in his rape therapy group are all inadmissible in court.

In court, Nick sits in front of the judge with is lawyer who is trying to provide context for the therapy group where his client confessed. He points out that Nick’s admission is admissible because the group is held by a minister and deemed a religious organization that is protected by law. The minister is brought to the stand. He explains that the meetings are spiritual. The prosecution points out that the minister’s work at night is a hobbie. By day he works at a place called Bunnies as a security guard.

Dalton’s DNA is out as well as the victims. They never saw him and since they can’t use his admission they have nothing. They have Will, Olivia points out. Carisi and Amanda head to Will’s job to talk him into testifying against Sam. Will shared that he had coffee once with Sam who told him his victims enjoyed it. Hs information puts the case back into motion.

In court, the prosecution introduces the case against Sam who raped 3 women. The victims each take the stand. His lawyer rips their stories to shreds. Will is up next, but he is a no show. Carisi and Amanda look for him, stopping by to see the minister.

Will is on a rooftop. He wants to jump. He can’t help himself, he has the rape gene. Olivia shows up. She tells him that her father was rapist. He doesn’t have the gene. He isn’t as bad as his father. She levels with him, reasoning that he isn’t a rapist. Carisi pulls him from the side of the roof. Will testifies in court the next day, putting Sam away for good.

After court, Olivia gets a call. Noah fell at school and hurt his knee. No big deal. She tucks him in that night and tells him she will always love him no matter what.