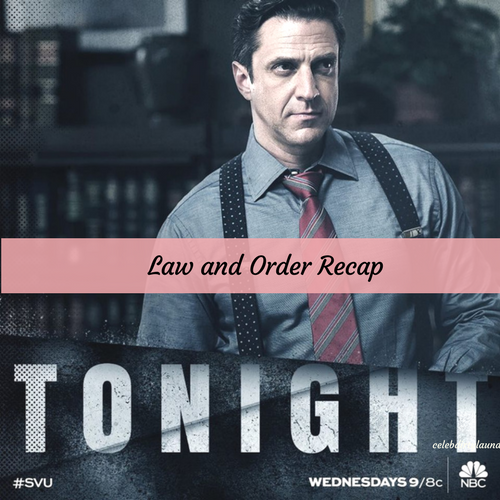 Zooey is at a swanky party with billionaires. She is congratulated for her efforts at finding a great deal. Her client tries to ply her with wine, but she turns him down. The next day he comes by her office. He tells her he had fun last night, they should do it again. Zooey heads down to the station and asks for a detective. She was raped by the King of Wall Street, Eli. Olivia looks shocked.

Zooey chronicles her night. Dinner and then she went to his apartment. He kissed her, she kissed him back. He became forceful, throwing her down on the bed. She screamed. He covered her mouth. She watched his $4 million watch tick on the night stand until it was over. She told her boss this morning and he told her to think it over. Olivia and Fin pay Roger a visit. He looks surprised when Olivia mentions rape. Roger’s boss comes in. He takes Roger with him to talk with their general council.

Amanda and Carisi pay Eli a visit at his office. He doesn’t want to talk without his lawyer present. They can make an appointment. They ask him for a list of the people who where at his night the night before. He lists off the names. They meet with a model that was there. She mentions that Roger paid her $20k to attend the party as Eli’s date. She was happy that she didn’t have to finish the night in

She mentions that Roger paid her $20k to attend the party as Eli’s date. She was happy that she didn’t have to finish the night in his bed.

Eli shows up at the precinct. He wants to put this all to rest. He supplies them with a flirty email message Zooey sent the morning after she was supposedly raped. They meet with Zooey. She says she did not send the email. Someone must have sent this email from her computer. The team plans to dust for prints. It turns up nothing. Olivia tells the team to target Eli’s enemy. They find a previous business partner, who remembers Eli was tangled up in a rape 3 years prior that was swept under the rug. They visit the victim. She signed a non-disclosure. Fin pushes her a little. She reveals that she met Eli through Roger. Amanda and Carisi visit Roger at work. He denies it all, running away from them into his office.

The team talks. They think Roger could have sent the email on Zooey’s behalf. Olivia orders warrants for Roger’s home.They meet with Zooey again to ask her about her relationship with Roger, her trip to the Hamptons the year before with her coworkers.

Olivia and Fin get their warrants. They go through Eli’s home.

They discover that there is a service elevator that was used the same night that Zooey was raped.  They check the cameras and find their man. A man named Harry. Carisi poses as a buddy of Eli’s. He lets him into his apartment.

They talk before Carisi asks to buy cocaine. He takes a bag out of the oven. Amanda comes in and they cuff him for possession and intent to distribute. They bring him in for questioning. They ask him why he used the service elevator. He explains that he saw the rape happen but left right away. They wire him up and he meets with Eli on the street as they listen in.

Harry confronts Eli. He heard the woman yell stop. Eli denies it. Harry says he needs money. Eli offers him $1 million. The prosecutor doesn’t think its enough to get Eli on charges.

Olivia visits Zooey and Roger’s boss. She wants to help him by getting him on the right side of the law before they arrest Eli.  His boss gives him up quick. He has recorded audio. Roger will be out by the end of the day.

Olivia meets with Zooey. She no longer wants to testify. She has been offered a lucrative position at a firm that wants her to maintain a low profile for $5 million a year. She would rather be a rich rape victim than a poor one. Olivia tries to talk her out of it. She doesn’t want to live in hell anymore.

A picture of Eli and the CEO of the firm that offered Zooey a job hits the web. The team sees it as extortion. Olivia tries to talk to Zooey once again. She isn’t budging. Olivia brings him Eli’s other rape victim. They talk.

In court, Zooey is on the stand. They watch video footage of Roger and Zooey talking the day after the rape. Zooey discusses how she turned down the $5 million to save her own dignity.