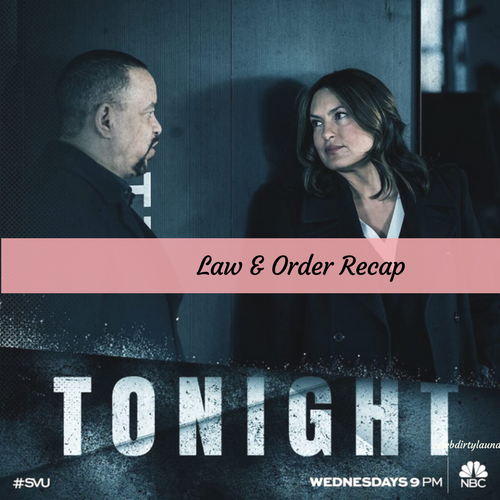 Tonight on NBC Law & Order SVU returns with an all-new Wednesday, April 5, 2017, episode and we have your Law & Order SVU recap below.  On tonight’s Law & Order SVU season 18 episode 15 as per the NBC synopsis, “A man under investigation for rape and murder threatens to expose the secrets of those working the case.”

Olivia and the team are holding a conference for the joint investigation of a serial rapist killer. They are asking for everyone’s help in catching the killer who targets twenty-something brunettes. Meanwhile, a tech team works on a new app. Leading the team is a man and a woman, who are having a work relationship. They plan on meeting up at 7 after she has dinner with her sister. She doesn’t make it. Olivia and the team arrive the next morning to see her lifeless body. Judging by her positioning she was killed by the serial killer they are looking for.

The latest victim’s name is Jennifer Knowles. Her sister IDs her with Olivia and Amanda. Jennifer’s sister Laura tells them about David, her boyfriend and her boss. She planned on breaking up with him. Jen doesn’t drink so hanging out at bars wouldn’t be a possibility. Amanda and Carisi head to Jennifer’s work where they meet David. He thinks they are there about his app. He spouts off that he isn’t responsible for sick men using his app to stalk women. They inform him that Jennifer is dead. He is overwhelmed.

The team goes through her social media and discuss anything they have found. Olivia gets a call. The police think that they have their man. He is a gypsy taxi driver who picked up a drunk woman in a bar. His car is filled with kidnapping paraphernalia. They take him in. he admits he only has one life they can take, but he still wins. He killed all those whores. They show him pics of the victims. He gives them details of each. Olivia noticed his face when he saw Jennifer’s picture. Her gut tells her he didn’t kill her even of the serial confessed. The evidence doesn’t line-up. Olivia refuses to close the case. There is a copy-cat out there.

Laura comes into the precinct. She doesn’t believe her sister was killed by the serial rapist. She thinks it was David. He was controlling and has a temper. She finds out that David knew that she dropped out of AA. Her sister didn’t even know. He was spying on Jennifer and she thinks he is also watching her.

The team heads over to Jennifer’s apartment to take a look through. They find rope under the sink, a small residue of blood on the coffee table with a cleaner and her laptop with the camera taped. They call David in after talking with an expert on the rope fibers.

David is annoyed. He answers questions about his whereabouts. He and Jennifer had a one dimension relationship that was based on sex. Olivia asks him why his prints where on the handle of a hammer under the sink. He plays dumb so she details what she thinks he did with Jennifer, her killing and the dumping of her body. He asks for his lawyer after complimenting her on her wild imagination.

Olivia gets a call. The researcher made a mistake. The rope in Jennifer’s apartment is different than the rope that tied her hands. He hasn’t made a mistake in 20 years. Olivia thinks he may be lying to protect himself from a threat.

Amanda and the team fight out that Laura, Jennifer and the precinct’s computers were all hacked. Dr. Bennett is missing. They find him by the river in the snow with a gun. He sits on a bench. He is upset. He details a phone call he received. He was blackmailed.

The team goes to David’s office with a warrant on the way. She tells all of the employees not to touch anything. Her warrant doesn’t go through. Barba has recused himself from the case. They are all confused. David smiles. She tells him she isn’t going to back down.

Olivia heads to find Barba. He won’t talk. Olivia gets a warrant from another DA. They pick up all of the computers and equipment from David’s office. They also found a burner phone. They look at all of the calls. One in particular draws there attention. They visit a young girl who talked to a detective. They realize the detective is fake and she is connected to Barba.

Olivia finds Barba at the bar. He tells her his connection. The young girl is the daughter of a witness he once worked with. He gave her a loan. She was a heroin addict. She died after putting a bad man away. After that Barba started sending her daughter money every month. David must have hacked his bank account because he used it against him.

They find tapes of Jennifer and David. He was recording her. They find her sister, who tells them that Jennifer had her bases covered when she broke up with David. The team goes back to David’s with a special agent who sees that the TV records video and audio. They find a video time stamped with the night of the murder. Video shows David and Jen fighting. She slaps him and he hits her back. She goes flying into the table and doesn’t get up. They take him in and charge him with murder.

Olivia pays Barba a visit that day. He doesn’t know what will happen to his career. But he knows he loves his job.