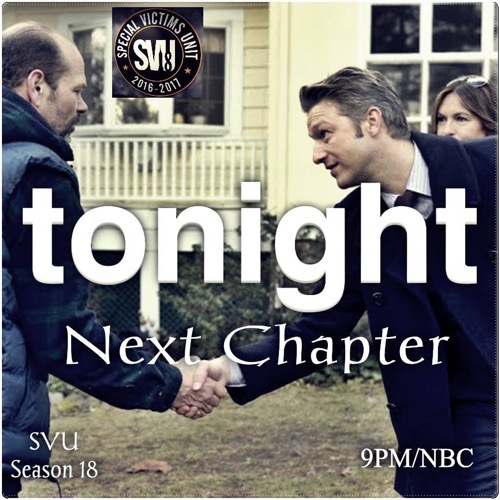 Tonight on NBC Law & Order SVU returns with an all-new Wednesday, January 4, 2017, episode and we have your Law & Order SVU recap below.  On tonight’s Law & Order SVU season 18 episode 7 as per the NBC synopsis, “A masked man rapes a woman, and she believes he’s the same criminal who stalked her in the past. Meanwhile, Tucker ponders his retirement and his future with Benson. (Mariska Hargitay)”

Tonight’s episode of Law & Order SVU kicks off with Olivia out to dinner with Tucker and they are having a good time. Then, Tucker drops a bomb on her. He announces that he wants t’ “give up his shield and retire.” Their conversation takes an awkward turn, and Tucker wants to know where they stand as a couple. Across town, Quinn

Across town, Quinn Berris is having drinks at a bar with two of her co-workers. She is acting uneasy, like she recognizes one of the guys at the bar. Quinn walks home alone, and someone grabs her as she is walking in to her house.

A few hours later, Fin and Olivia rush to Quinn’s house. She called 911 and said that a man in a mask grabbed her and pushed her in to her house and raped her. Quinn cries to Olivia and Fin that she knows who did it – his name is Ray Wilson and he has been stalking her since college, she’s 27 years old now.

Quinn explains that ray had a crush on her in college and she turned him down. Then, he got super creepy and began calling her non-stop and following her around, he even hid in her closet in her dorm room before. Quinn had a restraining order against him, he went to prison, and he just got out last year. A cop named Sgt Cole handled Quinn’s case, but he is retired now.

Quinn heads back to the precinct and Quinn’s story adds up – Ray Wilson was arrested for stalking her 4 years ago. The rape kit was a bust, whoever assaulted Quinn was wearing a condom. Olivia and

Olivia and Carisi head to Jersey to meet up with Tom Cole, he invites them in to discuss Quinn’s case. Quinn has already called Cole and filled him on being raped. Cole explains that he and his wife Linda are close to Quinn and they “kind of took her in.”

Cole apparently paid Ray Wilson a visit after he got out jail and warned him to leave Quinn alone. Cole says that Ray is “totally screwed up” and definitely still obsessed with Quinn. Fin and Rollins head to the café where Ray Wilson works to question him. Ray is shocked to hear that he is a suspect. He says that he was in

Fin and Rollins head to the café where Ray Wilson works to question him. Ray is shocked to hear that he is a suspect. He says that he was in church in Belmar last night and he has an alibi. Rollins and Fin head to the church and the pastor confirms that he was there all night. Everyone at the church seems to think that Ray is a reformed man, and there is no way that he could have hurt Quinn. They even have video to prove that he was at church during Quinn’s attack.

Carisi pours over the surveillance footage from Quinn’s apartment, but so far there is no sign that Ray has ever been near her house. It looks like Ray Wilson really is not their guy.

Olivia and her team are back to square one. They head to the bar that Quinn was drinking at and talk to the bar tender. They learn that the bar tender has a huge crush on her. He does have an interesting tip for them though. The bartender reveals that Quinn got in an argument with a guy from her work that night named Ryan.Afterwards, they pay Quinn’s ex-boyfriend Jack Price a visit. They learn that Jack caught her co-worker Ryan outside of her house too. They actually got in to a fight and a shoving match over Quinn.

Afterwards, they pay Quinn’s ex-boyfriend Jack Price a visit. They learn that Jack caught her co-worker Ryan outside of her house too. They actually got in to a fight and a shoving match over Quinn.

Ryan is starting to look like their attacker, but the case takes an interesting turn. They found a cigarette butt on the ground outside of Quinn’s house and did a DNA test on it – it belonged to her stalker Ray Wilson. But, he had an air-tight alibi?

Olivia and his team have a new theory – they think that someone framed Ray Wilson and picked up one of his cigarette butts and dropped it in front of Quinn’s door so he would go down for the rape.

Fin and Rollins pay Ray a visit. He’s not thrilled to see them, Ray says that he got fired from the restaurant because they showed up at his work. Ray reveals that something strange happened and someone in a black car was parked outside of his job while he was smoking. Olivia and her team pull the surveillance footage and run the plates – it was Tom Cole’s car. It looks like Tom Cole, the retired cop in Jersey, is the one that framed Ray Wilson.

Rollins and Fin pay Tom Cole a visit and he flat out lies to them and says that he has never been to the restaurant where Quinn works.

Meanwhile, Carisi and Olivia pay tom Cole’s wife Linda a visit at the school where she teaches. Linda gets upset and realizes that her husband is a suspect. She admits that her husband left the house the night that Quinn was raped, and he was gone until the next day.

Olivia calls Rollins and tells her to get a warrant and call Quinn and warn her that Tom Cole is the attacker.

Fin and Rollins rush to Quinn’s hotel but she is gone, it looks like Tom picked her up. Tom’s wife thinks that Tom took Quinn to their family’s old farmhouse.

Olivia and her team rush there, and they call the FBI for back up. Olivia and Carisi are the first to arrive. They get out of the car and head up to the house to investigate – they find Tom’s car parked outside. Quinn is screaming from inside for help, she says that Tom has a gun.

Olivia calls Tom Cole on his cell phone and tries to convince him to let Quinn go. While she is talking to him, Carisi tries to sneak up to the house to get a better look.

Carisi slips inside, meanwhile Tom is having a meltdown on the phone. He cries to tell his wife that he is sorry and then he hangs up on Olivia. Tom finds Carisi in the house and points a gun at his head and forces him to drop his weapon. Right before Tom pulls the trigger, Olivia sneaks u behind and shoots him in the back of the head and kills him. Carisi and Quinn are both shaken up – Olivia comforts Quinn.
The rest of Olivia’s team and the FBI arrive. They take Quinn to the hospital to check her out. Olivia gives her a pep-talk before she leaves and makes Quinn promise that she won’t blame herself for what happened.

Carisi gets the blood cleaned up off his face – then he thanks Olivia for saving him in the house.