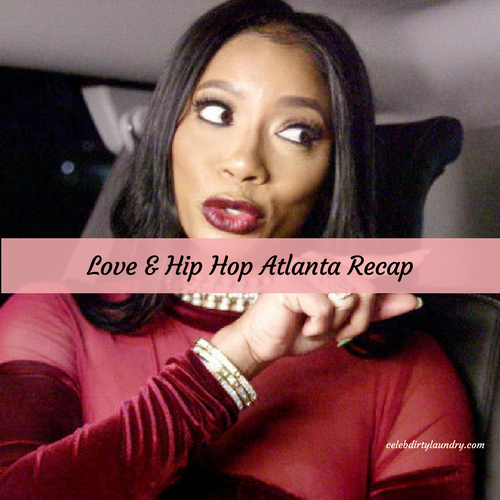 On this week’s episode of Love and Hip Hop Atlanta Rasheeda continues to confront Kirk about his lies regarding Jasmine. She tells him “She told Karlie that you had my son Carter around her. She also lives in the building. Did you know that?” Kirk finally admits that he did. Rasheeda asks him “Are you paying her bills?” Kirk denies paying her bills or that they are in a relationship. Rasheeda asks him “Why would you do that?” She tells him “I may not be perfect, but I have always been there for you.” Rasheeda takes off her ring and throws it at Kirk. She then tells him “You need to leave because I am about two seconds from snatching you up.”Young Joc meets up with

Young Joc meets up with Scrappy and Waka and they are discussing their issues with their women. Waka says “I want to get back with my family. I know Tammy is still mad about me cheating on her, but I know what I need to do to make it right and I am going to do it because I don’t want anyone else raising my daughter.”

Tommie is still not speaking to her mother after the argument that occurred when she got out of jail. Instead she has decided to change the class of people that she hangs out with. She contacts Tammy and the two decide to go to an event that Arianne is having. When they arrive everyone is shocked to see them together including Mimi, who hasn’t seen Tommie since she ruined her ex- girlfriend Chris’ birthday party last year, and Karlie who has had no contact with Tommie since their issues over Karlie’s dealings with Scrapp before he went to jail.

Tammy says “I wanted to bring Tommie along because she is a good person and I wanted you all to see that.” Tommie apologizes to Mimi for actions at the party and then she turns and apologizes to Jessica Dime for her actions regarding Joseline. Karlie is not buying the change and she and Jessica still seem to be at odds. Karlie says “I need to talk to the four of you.” Jessica says “That’s fine. I have had a great night.” She leaves and Karlie reveals the news about Rasheeda, Kirk, Jasmine and the baby. Mimi says “I know Rod. He is a scam artist.”

Jasmine reveals that she and Rod also have a girlfriend named Tianne. Rod is upset and frustrated because Tianne has also been sleeping with Kirk. He asks her “Are you sure that you are done messing with Kirk?” Tianne says “I didn’t know that Jasmine was sleeping with him so once again we ended up sharing a man.” Rod is also upset because Mimi is talking about him. He says “I am simply trying to put my family back together and now you have to go around showing Karlie reciepts and videos. I am also hearing that Mimi is talking about me.” Jasmine says “You need to talk to her and find out what’s going on.”

Stevie J is having his own set of issues. In addition to his daughter having decided to drop out of school and move in with him, he is also dealing with the paternity issue with Joseline. Mimi stops by to talk to him about it. She tells him “Joseline is a terrible person and no baby is going to change that.” Stevie tells her “She has had a hard life.” Mimi tells him “She knew that the things she posted on social media would be damaging to my daughter. I don’t want her anywhere around Eva. Joseline and Melissa take Stevie’s underwear to the DNA lab to try and get them tested. When they present them to the lab tech she tells them “I can’t use them because you packaged them in a ziploc bag and that could mean they were tampered with.” Joseline gets vey upset and asks the lab tech “Why would I tamper with the drawers?” The tech assures her “I believe you, but the only way to ensure the integrity of the test is to have the potential father come in on his own and submit a sample.” Joseline is not happy to hear this. Melissa says “Don’t believe everything you see on TV.”

Jessica Dime and Tommie meet up to talk. They talk about Joseline and Jessica says “I hope the baby grows her up.” They move on to talk about Karlie and Tommie says “I’ll never forgive her for what she did with Scrapp.” Jessica says “Can you two at least come to a place where ya’ll can get along without acting out in public?” Tommie laughs and tellls Jessica “I’m going to try and do better even though I’ll never forgive Karlie.”
Melissa closes down her bar so that Mimi and Rodney can have a private meeting about the situation with Kirk. The meetiing starts off with a bit of back and forth and name calling between the two exes before they get down to business. Rod tells her “I know there is a baby because I see the baby every day.” Mimi says “Has there been a DNA test?” Rod tells her “No, not yet, but there will be because Kirk is denying the baby.” Rod then brings in Jasmine and Tianne to tell their tales of affairs with Kirk. The meeting breaks down as insults are hurled and finally Melissa throws Rod, Jasmine and Tianne out of her bar.

Tammy goes to check on Rasheeda after all of the mess with Kirk. She tells Rasheeda “I know what you’re going through. You feel like you’ve been betrayed by your best friend.” Rasheeda says “It’s not so much the cheating, him bringing a baby in and the possibility that this could be Carter and Ky’s little brother is what is so devastating.” Tammy is completely understanding. She tells her “Whatever you want to do I’m going to ride with you.”

Tommie and Jessica get ready to head out on their double date. Jessica has decided to bring her new girlfriend who is Fetty Wop’s ex- girlfriend. When Tommie shows up Jessica is shocked to see that she is accompanied by Young Joc.