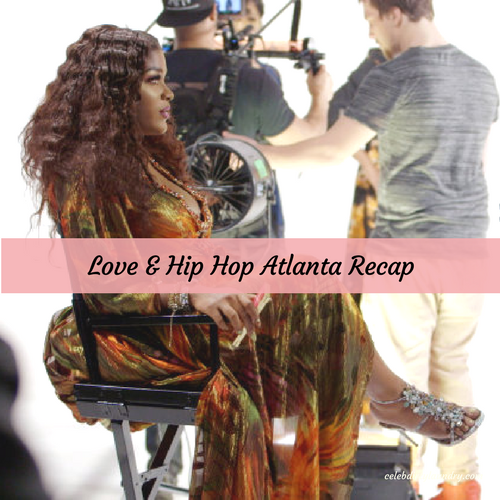 Stevie and his daughter Savanna are headed to Stevie’s new house. His other daughter Sade is there as well and he tells them “We’re all one big happy family.” He also tells his daughters “I have to take a DNA test and if this new baby is mine Joseline may be living here as well.” The girls are not happy to hear this. Stevie tells them “Ya’ll are going to have to respect any female that I bring into the crib.” Savanna says “What about Dorian? Doesn’t he deserve respect?” Stevie tells them “Dorian has to come to the table right and apologize.”

Moriah is looking to open up her own business. She calls Shooter to the location that she is looking at as the location for her nightclub. Shooter is suspicious when he arrives and wants to know what Moriah wants. She tells him “I need you to break me off some real money so that I can get my business off the ground. If you don’t I am going to tell Sierra about our little arrangement.” Shooter gets angry and tells her “If you need money you need to go to the bank because I don’t have any money.” Moriah fires back and says “What about Sierra?” Shooter tells her “You can tell the secret if you want to.”

Joc is working with Treasure at the radio station. She is his new intern. She tells him “I was at the strip club the other day and Tommie tells me that you and her are dating.” Joc says “Whatever I’m doing is what I’m doing. My personal business is my business and I am not married to nobody.” Treasure says “I think I need to tell Sina about Karlie and Tommie because she is my girl.” Joc puts a stop to her right then an there and tells her “I think that you need to stop before you overstep your boundaries.” Joc then reveals that Sina is messing with Rod. Treasure doesn’t believe it all.

Mimi and Moriah meet up for a yoga session. Mimi reveals that she is going to Joseline’s video shoot. Moriah is impressed. Moriah then proceeds to drop some news of her own. She tells Mimi about wanting to open her own club, but that she is having problems with her “investor.” Mimi asks who the investor is and Moriah reveals that it’s Shooter and that the two have been sleeping together for a year. Mimi is shocked to hear this news.

Stevie heads over to the pool hall to meet up with his son Dorian. Stevie says “Did you really feel like I wasn’t there for you?” Dorian says “You weren’t there for me physically.” Stevie says “I was there financially.” The two men continue to talk. Dorian tells him “I want you to respect me as a man.” Stevie says “I do respect you as a man. You stepped out and did your own thing and now you’re raising your son.” The two men apologize to each other and hug it out.

Joc goes to see Sina and address the situation with Rod. Sina tells Joc “Me and Rod are cool. We are kind of dating.” Joc is angry when he hears this. He tells Sina “Don’t have him around my kids.” Sina says “Why is that your concern?” Joc tells her “Have him around my kids and see what I do.” He then storms out of her apartment.

Joseline is getting ready for her video shoot for the song “Baby Daddy.” Lovely Mimi shows up as well as Sierra. There is serious tension between Sierra and Mimi. Sierra says “Let’s get straight to it. I apologize for coming at you the way I did, but please don’t come with the drama.” Mimi tells her ” I don’t have any drama now that I”m out of your shop. You have to worry about your own drama.” Sierra fires back “There is no drama at the Glam Shop now that you’re gone.” Mimi tells Sierra “Moriah is sleeping with Shooter.”

Sierra is shocked to hear this and has to leave. Joseline comes over and tries to sort things out. Joseline tells Mimi “This is supposed to be about woman empowerment and you two are about to tear each other’s hair out.” To add to Joseline’s issues Dawn is upset when she finds out that Jessica Dime has shown up. Jessica says “My problem with you was that you didn’t keep it real, but I am a grown woman and I am willing to move on.” The two women hug.

Meanwhile Sierra is waiting outside for Shooter. When he pulls up she immediately confronts him and says “Mimi told me that you had sex with Moriah. Please tell me that it’s not true.” Shooter tries to deny the accusation, but Sierra is not hearing it. All of a sudden Moriah shows up and she is really angry that Shooter has revealed the secret. Sierra tells her husband “After all the baby momma drama and foolishness I put up with from you and you do this? I’m done.” Moriah’s anger explodes as she sees her gravy train being whisked away from her.