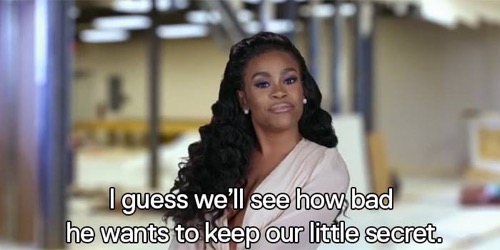 This week on Love and Hip Hop Jessica is trying to calm Karlie down. Karlie says “I always have people coming after me for having her back!” Jessica tells her “Tell Joseline that in a calm voice. Calm down.” Karlie comes back into the room. She tells Joseline “I know that I am a good person.” Joseline tells her “You came at me with some foolishness about my baby daddy. If you hear something about my baby daddy in the street just keep it to yourself.” Karlie tells her “You are the only person who gets to me like this.” The two ladies eventually hug it out.

Stevie meets up with Kirk to try and figure out what’s going on with him. Stevie asks him “Why didn’t you come to the bachelor party?” Kirk says “I knew Rasheeda would be there and it would be a whole lot of messiness and sure enough that’s what it turned out to be.” Stevie asks “Is the baby yours?” Kirk tells him “No.” Stevie says “You need to take a paternity test and get it out the way so Rasheeda will feel better.” Kirk is still feeling resistant about the whole idea about taking the paternity test. He says “It would not be something that would lead to good feelings.”

Tammy meets up with Mimi, Karlie and the rest of the girls. Joining them is Stevie’s new artist. Mimi warns her. She says “Joseline has a habit of messing up Stevie’s business so you might want to be careful.” The Panamanian Princess says “I have heard about Joseline, but I’m not worried about her. Tammy says “You might want to have a conversation with your baby daddy because the rumor is that he is playing house with Joseline.” Mimi is not happy to hear this. Mimi says “He better not have that beast anywhere near my daughter.”

Stevie goes to Mimi’s to tell Eva about the birth of her new baby sister. Before Eva comes into the room Mimi tells him “I met your new artist while I was hanging out with the girls. She tells me that you and your new baby momma are playing house.” Stevie immediately denies the accusation. He tells Mimi “Joseline and I are not living together.” When Eva enters the room Stevie sits her down and tells her “You know Joseline was pregnant right?” Eva nods. Stevie says “The baby is here. Are you ready to be a big sister?” Eva seems excited by the prospect. She asks “Am I still the princess?” Stevie tells her “Of course. You will always be the princess of my castle.”

While Joseline is in LA Stevie is at home with Bonnie Bella. When Joseline arrives at The Real everyone is impressed by her. She says “It really feels like I’m a natural. I gave them a little sexy, a little natural and spilled a little tea.”

Tammy decides to use the trip to Jamaica as a backdrop for her photo shoot. She wants to use Alita for her photo shoot. Chris is also there which has caused Mimi to show up. When the rest of the group is introduced to Alita Karlie is a bit put off. Karlie tells the ladies “I am having a grand opening. I want everyone to come. I invited Joc to come. I want Joseline to come too.” When Alita hears this she tells Rasheeda “I just saw Joseline on The Real and she was talking about you.” She then shows them the clip of Joseline talking about Kirk’s possible baby. Rasheeda gets angry and decides not to go to the party.

Joc is getting his hair done when Tommie shows up. She wants to apologize for her behavior with him. She tells him “I know it’s messed up that I lose my cool and things get out of control, but there is only so much I can take.” Joc tells her “I wish you could control your temper.” Joc tells her “Karlie and I ended on good terms and I did agree to go to her grand opening.”

Escalita meets with Stevie and dishes with him about the meeting with the girls. He tells her “You gotta be careful about who you hook up with out here in Atlanta. These girls are snakes. They will look to destroy you.” Escalita then says “There is one thing. Mimi says that I’m not your only latin artist. She mentioned someone named Joseline.” Stevie says “She’s not really signed to the label.” Escalita says “I don’t want any drama.” Stevie says “Me either.”

Rasheeda is meeting up with Kirk at Twisted Soul. Kirk gets up and tries to hug her. She tells him “You don’t have to get up. You can sit down.” She immediately lights into him. She tells him “I can’t even work at Press without people feeling sorry for me.” Kirk says “I’m sorry for that, but we can’t let the blogs determine our future.” Rasheeda says “What are you going to do?” Kirk looks lost. Rasheeda says “I’ll tell you what. You take the DNA test and call me back when you have the results.”

When Joseline returns from LA Stevie wants to try and lure Joseline back into a business relationship. He tells her “I know it’s gonna happen. When i see that smile i know it’s gonna happen.” Joseline says “I’m taking Bonnie and moving to Miami.” Stevie tells her “You’re not taking my baby to Miami.” Joseline tells him “I am taking Bonnie to Miami and I want twenty thousand dollars a month before we go to court and let the courts handle it.” Stevie fires back and says “The courts aren’t handeling anything and you aren’t taking my daughter.”

Karlie’s opening is going on. There is a strong tension in the room. Escalita is there with Melissa. Joc is there as well. Jessica has also brought Shawne to the opening to introduce him to the crew. When Karlie walks out she introduces Connor to the group as her new man. Joc seems a bit shell shocked.