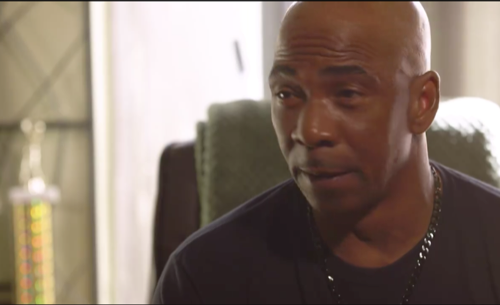 On this week’s episode of Love and Hip Hop Atlanta Stevie is preparing to have Bonnie Bella at his house. His two older daughters are not happy to hear this. They ask him “Does Eva know about her?” Stevie says “I have to tell her.” They want to know if Stevie is getting back together with Joseline. Stevie says “I don’t know what the future holds for the two of us.” Savanna says “I don’t mind her being my sister, but I don’t want the mother around until she apologizes to all of the girls for all of the stuff she said on social media.”

Tammy is preparing for her date with Waka. She is talking to Bambi about it. She tells Bambi “I want him to hurt like I hurt so that he will never do it again.” Bambi understands how Tammy is feeling. Tammy asks Bambi “What’s going on with you?” Bambi tells her “Scrappy and I are not getting married at all. We went to a counseling session with his dad and stepmom. It always seems like he has his people around to gang up on me.” Tammy tells her “At the end of the day you have to get back to being Bambi and doing you.”

Joc confronts Treasure about her telling Sina about his business with Tommie and Karlie. Joc tells her “I know that someone has been spreading my business all over the streets and I wonder who it was.” Treasure tells him “I felt like I had to tell Sina about you and Tommie because she is my friend and you claim to love her.” Joc tells Treasure “You have no right to get in my business and I can’t mix business with pleasure so you have to go.” He fires her as his intern from the radio station. Treasure is pissed.J

Joc, Scrappy and Stevie are listening to Gunplay record some new music. He is from Miami. Everyone congratulates Stevie on the birth of Bonnie Bella. Joc recounts the incident at the comedy club between Karlie and Tommie. Stevie asks “Are you smashing Tommie?” Joc says “Nope. She was using me to get back at Karlie.” Gunplay starts mentioning working in Miami and Scrappy says “Maybe I’ll move down there to work with you.” He then tells them that the wedding is off. Scrappy says “I want to throw a bachelor bash.” Stevie says “I have a Panamanian Goddess that I’ll bring through.” Everyone is excited about the party.Ernest and Dee have been

Ernest and Dee have been separated for the last two days after a huge argument. Momma Dee decides to pop up at Ernests’ mom’s house to see what’s going on. She is not happy to find him helping his mom around the house. He tells her “You don’t appreciate me as a husband. My mother appreciates my help.” Momma Dee tell him “You need to be with me at my palace and stop being a momma’s boy.” She gets angry and storms out of the house when Ernest refuses to leave with her.

Karlie meets up with Rasheeda and Tammy for a little dish session. Karlie tells the girls all about the mess with Joc and Tommie. Tammy is shocked to hear that Karlie and Sina are cool. Karlie says “Sina and I were cool before she ever came along.” Rasheeda says “Have you ever talked to Joc about it?” Karlie says “No, but I plan to.” Rasheeda says “Scrappy is having some type of bachelor party and I am going so we all need to go. I don’t know if Kirk is going to be there but if he is I need some support.”

Scrappy meets up with Momma Dee to tell her all about what is happening. She asks him “What’s going on with you and the Bam?” Scrappy says “Nothing. It’s over.” Scrappy goes on to tell her “I am having a bachelor bash to get all my feelings out of me because I am moving on to Miami.” Momma Dee is not happy to hear this. Scrappy then goes on to tell her about the situation with Kirk and Rasheeda. He tells her “Rasheeda is heartbroken and Kirk is laughing and talking about how he won’t take a DNA test.” Momma Dee says “Oh yes he will. I need to go talk to Shirleen and see what we can do about this.” Scrappy says “I would love to ask you not to do that.”

Tammy and Waka go out to the movies and Waka sets up a beautiful table for them. He then shows their history together on the big screen. Tammy is moved. Waka then reveals all the information to his social media. Tammy says “That’s a step, but it’s merely a step.” Waka says “I want you to come with me on tour for two weeks and I want you to come with me.” Tammy tells him “I have too much going on here. I can’t leave, but I am going to take a picture of this.” She takes a picture of the passwords and information that Waka has provided for her.

Shirleen and Momma Dee meet up to talk about the situation between Kirk and Rasheeda. Momma Dee says “Kirk was trying to put the blame in the marriage on Rasheeda by saying that she wasn’t having sex with him and that if she didn’t want to share him she needed to give it up.” Shirleen says “That’s a bunch of bull.” Momma Dee also tells her “Kirk feels like he is being nailed to the cross like Jesus.” Shirleen laughs and says “Good because that’s what he needs!”

Scrappy’s party is in full swing, but Kirk has not shown up yet. Momma Dee has a surprise for Scrappy tonight. Tammy shows up and confronts Scrappy. She tells him “My girl Bam isn’t here. What happened with the wedding?” Scrappy tells her “She got up and said There ain’t no wedding and that was all.” Stevie introduces his new artist to everyone. Everyone congratulates Stevie on the birth of Bonnie. Rasheeda says “At least you own it unlike some people.” Meanwhile, Joc is having his own issues. Treasure hunts him down at the party. She says “What can I do to make this better? I’m sorry for sharing information that wasn’t mine to share. I want to get on my knees to beg you.” Eventually, Joc gives in and gives Treasure her job back.

Momma Dee calls Shirleen to the stage. Rasheeda is worried. She says “I have no idea what my mom is up to tonight and with Momma Dee involved anything is possible.” Shirleen steps up and says “I came here tonight to address my son in law. Where is he?” Kirk is not at the party and since he is not there Shirleen decides to address his friends. Shirleen has a silver dome. When she lifts it there is a DNA test underneath. She tells Scrappy and everyone else at the party “Please get one of these.” Rasheeda is so embarrassed that she gets up to leave.