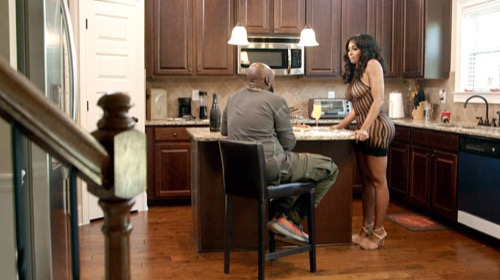 This week on Love and Hip Hop Atlanta The group in Jamaica is celebrating their last day on the island. Jessica is over the moon about her engagement.  They are talking about the men in their lives amd Jessica questions Karlie about her feelings about Joc.

Karlie says “I want Joc to be loyal to me.” Mimi gets a phone call that upsets her. She finds out that Stevie has had Eva around Joseline. She tells the ladies “He knew that I didn’t want that woman around my daughter and he waited until I was in Jamaica to do it.”

Rod goes to confront Logan about the situation with Kannon. Logan tells him “I’ve been smashing your girl bro.” Rod asks her “When was the last time you smashed her?” Logan says “I smashed her when she was living in the Buckhead apartment.”

Rod is stunned. Logan tells him “I just want to get a DNA test so that I can know if the baby is mine. If it isn’t mine I just want to go on my way.” Rod says “I’m gonna do that because we want you to go on your way.”

Mimi is upset when she goes to visit Stevie. She tells him “I thought I told you to keep Joseline away from Eva. Then I get a phone call from my baby telling me that she had a great time with her baby sister.” Stevie is stunned. He tells her “Maybe Vonna took her over there and Joseline was there for a minute.” Mimi is fire hot and says “I don’t care if it was for one second. I am now going to have to go take out a protective order to try and keep this woman away from my child because you won’t listen!”

Karlie is hanging out with Jessica reminiscing about the trip. Jessica tells her “I’m glad that you and Joc came to an understanding, but you are going to have to make a decison and soon.” Karlie says “I’m glad that Joc apologized, but he is not mature enough to be with me right now.” She asks Jessica “What would you do if Shawn cheated on you?” Jessica says “He won’t. It’s all about trust. How well do you really know Ceaser?” Karlie says “He introduced me to his mom, but I’m worried that he’s going to cheat on me.”Jessica says “It’s all about trust.”

Joseline meets up with Stevie. She tells him “I want you to go back to being my manager. I made great music with you.” Stevie says “I have new talent with them and I have contracts and obligations.” Joseline wants to know if the new artist is a man or a woman. Stevie tells her it’s a woman. Joseline says “Tell her that she is done working with you, and you’ll get your wife and your artist back because I know she isn’t as talented as the Puerto Rican Princess.” Stevie tells her “Before we discuss anything you need to apologize to my daughters. They were really upset by the stuff you put on social media.” Joseline agrees to do that.

Mimi is meeting up with Escalita. She says “I am going to take this opportunity to remind her what kind of crazy she is getting into.” The two ladies are sitting down talking and Mimi tells her about what happened when Eva called her and told her about being around Joseline. Escalita says “I called Stevie and asked if I was the only artist and he said I was the only one.” Mimi gives her a look which causes her to pause. She asks her “Why are you looking at me like that?” Mimi says “He’s going to try and screw you over.” Mimi invites Escalita to dinner. She is a bit nervous and says “Karlie will be there, but maybe it is time for us to clear the air and we can be friends.”

Karlie invites Ceaser over for breakfast. He is upset and reveals to her that he saw a video of her and Joc in Jamaica. Karlie says “Look Joc was the worst relationship I ever had and he just apologized.” Ceaser isn’t hearing it. He tells her “If you want to be with him be with him. ” Karlie manages to manuever Ceaser into bed and he forgives her.

When Rod comes back from his confrontation with Logan he is very upset. He confronts Jasmine about Logan’s accusations. He asks her “When was the last time you slept with Logan?” Jasmine says “2013.” Rod says “Not in 2015 at all?” Jasmine continues to deny sleeping with Logan around the time Cannon was conceived. She asks him “What’s it going to take for me to prove that Logan is not the father of my baby?” Rod pulls out a DNA test and slides it across the table. Jasmine is upset. Rod says “You brought him into our lives and now you need to deal with him.” Jasmine tells him “How about you wait until I take this test and prove that Logan is not his father before you make any decisons?” Rod agrees.

Escalita shows up at Jessica Dime’s showcase. Karlie is not happy to see her at all. Escalita tries to apologize to her. She asks “Why do you feel like you have to be in the middle of everything? It’s not your business.” Karlie does not like hearing this at all and flips the drinks over on Escalita. Jessica is trying to figure out what is going on as the fight escalates and the ladies have to be seperated by seperated. Both women have to be escorted from the club. Mimi steps outside and Escalita says “Every time I see her we are going to have a problem because i see just what kind of person you are!”

Stevie takes his daughters to meet up with Joseline to try and work things out. He tells them “Joseline is on her way and I want ya’ll to hear her out.” Vonna is not having it. Stevie tells them about Joseline’s proposal. Vonna tells Stevie “If you ever marry that lady we are done.” When Joseline arrives tensions are definitely high in the room.

When Stevie mentions Joseline being his girl both of his daughters seem absolutely repulsed. Joseline apologizes, but Vonna is not hearing it. She says “Do you know what we’ve been through?” The meeting quickly breaks down as the ladies start swearing and yelling and security has to step in. Stevie’s daughters storm out and he follows them leaving Joseline sitting by herself.