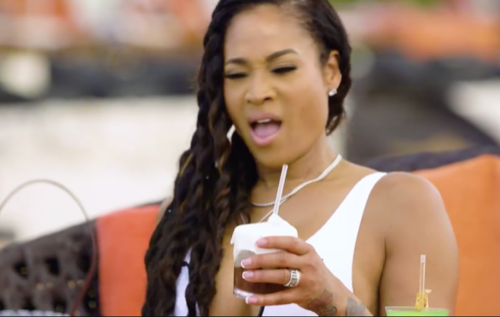 On this week’s episode of Love and Hip Hop Atlanta everyone is reeling from being introduced to Karlie’s new man Ceaser. Joc doesn’t seem to be phased. He tells Ceaser “You can take over dealing with all the foolishness that Karlie brings.” Meanwhile Karlie pulls Chris aside. She is upset because Chris has brought Stevie’s new artist Escalita to the party. She tells Chris “I just got back good with Joseline and I don’t want any mess.”

Rasheeda is at Press when Jasmine’s ex Logan stops by and drops a bombshell on her. He tells her “At the same time that she was supposed to be pregnant by Kirk she was also pregnant by me.” Rasheeda is shocked to hear this. She asks him “What makes you want to tell me this?” Logan says “I just want to know if it’s my baby.” He also reveals that the baby was named after his father and pulls out his dad’s death certificate to show Rasheeda the proof.

Rasheeda is further rocked back on her heels. She asks Logan “What do you want from all of this?” He tells her “I want to take a DNA test and know if the child is mine. I didn’t know anything about any of this until I saw the blogs. I’m not famous and I don’t want my people finding out about this that way.” Rasheeda is all for this solution. She tells Logan “Come back and see me after you get the results of the test.” He agrees.

The trip to Jamaica is on and Mimi is the first to arrive followed by Karlie. They meet up with Mimi’s friend Spice and the three ladies set about enjoying a bit of Jamaican culture. They arrive at the hotel and get settled.

Before Tammy leaves for Jamaica she has to settle things with Waka. He has moved back into the house, but he is sleeping on the couch. Waka is not feeling her new sense of independence. Tammy reveals that she has been working in the studio with Waka’s brother. He is a bit shocked to hear the news, but he is happy that she is pursuing another one of her dreams. He tells her “I want to hear it.” She plays a bit of the song she is working on and asks him “What do you think?” He says “I like it.”

Then Tammy reveals the girls trip to Jamaica. Waka is not happy to hear that. He says “I need to go.” Tammy tells him “No, you’re not going. It’s a girls trip. We are going to get our groove back.” Waka laughs and says “A lot of crazy stuff goes on in Jamaica.” Tammy just smiles. She tells him “It’s me, Mimi, Karlie, and Rasheeda just having a good time.”

Meanwhile Rasheeda is still struggeling with the new information that has come out about Jasmine and the baby. She goes to talk to Kandi Burress. She tells Kandi about the situation with Logan and the baby. Kandi asks Rasheeda “Why haven’t you talked to this girl?” Rasheeda says “I don’t believe anything that comes out of her mouth.”

Kandi asks “What does Kirk have to say about all of this?” Rasheeda says “He doesn’t want to take a DNA test.” Kandi says “That irks me.” Rasheeda says “I don’t think I can stay in a marriage where there is a child from another woman.” Kandi tells her “Always remember that there is a light at the end of the tunnel.” Rasheeda tells Kandi about the girls trip. Kandi says “Why are you going to let him stop you from having your fun?”

Karlie is up to her messy ways again. She has invited Melissa to dinner with her and Mimi. The two ladies are sitting down having a nice dinner. Karlie tells her about her stores opening and Melissa bringing Escalita. She also tells her about the conversation with Joseline. Mimi tells Karlie about her conversation with Stevie. She says “I encouraged Eva to get to know her little sister, but I don’t want that baby momma anywhere near my daughter.” As the two ladies are talking Melissa emerges from the shadows. Mimi says “Ha and the third dinner guest shows up!” The tension in the room is so thick you can cut it with a knife!

Mimi is not happy to see Melissa at all. Mimi says “I think you know what it is between her and I.” Melissa says “You know there was no disrespect toward you.” Mimi says “I don’t give a flying crap.” Melissa says “I want to be happy. I want to be cool with you and be able to call and check on you. How do we get back to that?” Mimi is not having that at all! Melissa finally gets the hint and says “Good luck, good luck with life.”

The guys are out playing basketball. Once the game is over they sit down to talk. The main topic of conversation is the ladies in their lives. Waka asks Kirk “What’s up with you and Rasheeda?” Kirk says “She’s not really happy with me right now.” Waka tells him “I’m on the couch right now on probation.” The guys decide to go to Jamaica and surprise the ladies. Kirk says “How do you think the ladies will respond to that?” Waka says “It’s time to go get your wife back man!”

Karlie is talking to Mimi and Jessica about her new man when Tammy walks up. The two ladies immediately try to squash their beef. Jessica says “When you snapped about Joseline at Tommie’s wine tasting I may have overreacted and i apologize.” Tammy says “I apologize as well.” There is an instant argument about Mimi and her issue with her friends being friends with Joseline. Mimi says to Melissa “What is the chatter that I hear about us having relations?” Melissa apologizes and says “I was talking to someone about it.”

All of the ladies are happy and surprised to see Rasheeda show up in Jamaica. Rasheeda tells the ladies about Logan’s visit to her store. She says “I am waiting for the results of his DNA test to see what Kirk is going to do.” Jessica asks “Does Kirk know?” Rasheeda says “No. I have no idea what Kirk knows.”

Later that night the ladies head out to the club and Karlie is on the loose! She is twerking on the floor and having a blast. Suddenly the ladies look up and there is Joc with Treasure. Karlie says “Why would you come out here and ruin our trip?”