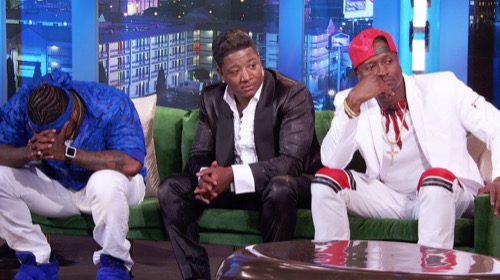 This season of Love and Hip Hop Atlanta has been crazy and drama filled. Now it’s time for part one of the Love and Hip Hop Atlanta reunion. The reunion kicks off with Nina introducing the cast. EverNyone is there except for Joseline, who refuses to take the stage for the start of the show. Nina starts out by addressing Tommie’s legal issues with Joseline. Nina asks her “Do you regret what happened on the street that day?” Tommie says “No, because I didn’t do anything wrong.”

Nina says “Tommie I know you can’t be in front of Joseline physically, but what would you say to her if you could?” Tommie says “I would want to know why she wants me off the street?” Nina then asks Stevie “Did you know where Tommie was staying?” Stevie denies it, but Tommie says “Stevie you came to my room and pulled out the beefcake!” After denying it for a bit Stevie finally admits that he did expose himself to Tommie.

Nina moves on to about the incident at the spa between Tommie and Treasure. Nina asks Tommie “Why did you come at Treasure like that?” Tommie responds “I thought she was going to apologize and she didn’t.” Nina then moves on to ask Treasure “Why did you go at Tommie that way?” Treasure goes off on a rant talking about how she wasn’t feeling Tommie. Nina tries to settle things down and tells Treasure “We want to get your side, but we have to be able to understand you.” Treasure calms down and tells Nina “I just don’t like her. Tommie came at me sideways and I had to check her.”

The problems persist as Nina moves on to talk to Jessica and Tommie. They try to address the falling out at the wine tasting and it quickly falls apart. The two ladies quickly begin yelling and screaming at each other. After settling them down Nina addresses the issue between Tommie and Karlie. Tommie says “ I just liked hanging out with Joc. He was just a cool dude.” Joc says “I’m not the one to try and tame Karlie because I know me.”

Nina then asks “When did you decide to  bring Ceaser into the situation?” Karlie says “The situation with Ceaser is like this. I went to pick him up and I heard that Tommie was downstairs waiting to get with him.” Nina says “So you and Ceaser are not together anymore?” Karlie says “No, because I’m not going to lay with anyone who is going to mess with her.” Tommie says “I’m going to mess up everything you have going on.” Karlie tells her “You can get with all my sloppy seconds, but just know every time you doing them you tasting me!”

When they return they deal with the allegations of Kirk’s fathering a baby with Jasmine. Nina questions Kirk about his role in the paternity mess. Nina says “Was it a one time thing?” Kirk says “It was a one time thing and protection.”

Nina asks Rasheeda “Do you believe it was a one time thing?” Rasheeda says “No. Some things just aren’t adding up.” Joc speaks up and says “It’s not a manufactured thing. To see this happen. Kirk’s pain is real. I didn’t think he cared, but that’s just how he is.” Rasheeda breaks down and begins to cry. She says “This breaks my heart. Not only did you hurt me, but you broke me. You have children. Your children look at you like a super hero. You didn’t think about our family.” Everyone on the stage is crying and super emotional.

Mimi says “I just want ya’ll to work on your family for yourselves and your children.” Kirk breaks down and says ‘’I love Rasheeda and I just got myself into a mess and don’t know how to get myself out. I never meant to hurt her or my family.”

Nina asks the Frost family about the allegation. Kurt denies it. Shirleen says “I hope he wouldn’t be dumb enough to sleep with gutter trash.” Rasheeda says “I just don’t know, but I hope not.” Nina then says “Kirk you could settle all of this by taking a DNA test.” Kirk fires back and  says “I am not taking a test in front of cameras and letting them use a baby to allow three people to get a come up.”

Nina then asks if they would let baby Cannon be part of their family if he was kirk’s son. Kirk says “Yes, because I don’t want my son raised around a bunch of pimps and hoes.” Rasheeda says “I would want that baby to know his siblings because he didn’t do anything wrong.”Nina says “Rasheeda you are a class act.”

When they return Nina speaks with Moriah, Siarra and Lovely Mimi about the situation at the Glam shop between Moriah and Siarra. Nina asks Shooter “How did you feel about putting your wife in a position where she could talk about what you did to her sexually?”

Shooter says “I’m sorry baby.” Nina asks Lovely Mimi “Are you sorry about the way you told her?” Mimi says “Yeah because I’m a married woman.” Nina then asks Siarra “Have you forgiven Shooter?” Siarra says “I’m working on it because forgiveness is everything,” Nina asks Shooter ‘’Is there anything else you want to say to your wife?” As he starts to apologize again Jessica speaks up and tells him “I just think you need to button up your shirt.” The crowd busts out laughing,

Outside the studio there is a commotion involving Joseline and Stevie and while they are trying to sort it out we take a look back at the turbulent mess that was their relationship this season. When they return Stevie is back on stage. Stevie says “Joseline wanted to only sit with Dime and Melissa. This is an ensemble cast and she can’t have it her way…