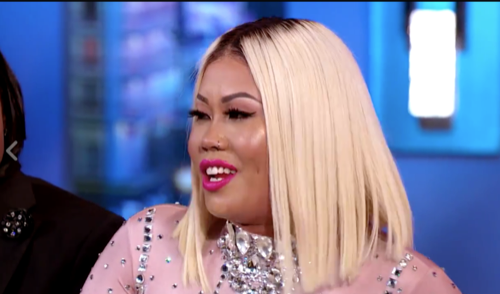 This week on part two of the Love and Hip Hop Atlanta reunion Nina kicks off the show by continuing to talk to Stevie about the situation with Joseline. They show footage of a conversattion between Joseline that happens outside the studio. Joseline is highly irate, She says “F Love and Hip Hop. I’m over it.”  Everyone is shocked. Stevie says “This is ensemble cast. We have all been here all day. Why can’t she be here all day?” Stevie then says “She quit the show.”

Nina is shocked to hear this. Nina asks Jessica Dime “How do you feel about her leaving the show?” Jessica says “I just wish that everyone could see what I see in her.” Mimi pipes up and says “Joseline called CPS on me and there was a 90 day investigation. I don’t want this bitch anywhere near my child.” They then talk about the situation between Stevie’s two older daughters and Joseline. Nina says “Stevie you left with your daughters.” Stevie says “Absolutely. They were there before Joseline and they will be there after her.”

Nina moves on and brings out Stevie’s new artist Escalita. Mimi says “I’m going to hook the two of them up. I like her much better than that other thing and I’d much rather have her be Eva’s stepmother.” Stevie laughs and says “It seems like you like her. Maybe I’ll hook you two up.” Escalita is above it all. She says “I’m just here to work on my music and stay out of the petty drama.” Nina then asks Escalita and Karlie about the drama at the grand opening where Karlie threw the vegetable tray at her. Escalita says “I’m woman enough to apologize and say I’m sorry.” Karlie accepts her apology, but does not apologize for throwing the vegetable tray.

When they return Nina talks to Momma Dee and Ernest about their issues this season. She asks Ernest “How does your mother feel about you and Momma Dee?” Ernest says “My mom loves Dee, but I married the craziest damn woman on the planet.” Momma Dee says “Ernest is over at his mother’s house five out of seven days out of the week and that is not going to work when we are trying to build a marriage.” Momma Dee then says “Ya’ll will be happy to know that Ernest is paying some bills in the house!”

Nina then moves on to talk to Lovely Mimi and Karlie. It quickly breaks down as a sreaming match breaks out between Karlie and Mimi. Sierra says “I have respect for Mimi and the fact that she has her skills. We just can’t get money together.”

When the show returns they show clips of the ladies trip to Jamaica. Nina asks Rasheeda “How did you feel about Kirk popping up?” Rasheeda says “I didn’t want a pop up. I wanted a girls trip.” Nina asked Joc “You were there too..” Joc says “Yeah I instigated the pop up.” Karlie asks “Who brings their intern to a romantic trip?” Joc says “It wasn’t a romantic trip for me.”

All of a sudden a fight once again breaks out between Treasure and Karlie. It is also revealed that Joc and Karlie hooked up. They show the clip of Sean’s proposal to Jessica.  Everyone is happy for her as she shows off her new engagement ring. Jessica says “Everyone knew about it but me, but I’m so glad they didn’t tell me.” Nina asks Rasheeda “Do you have any advice for them?” Rasheeda says “Communicate and make time for each other. Communication is key.” Jessica thanks her.

When they return Tommie and her mother’s relationship is the next subject on the menu. Nina reveals that Samantha is not on the show, but she asks Tommie “What was your relationship like with your mother when you were younger?” Tommie says “It was good,” All of a sudden she gets really upset and storms off the stage. Jessica says “I know she says that her mother sent her to Juvie and I understand because my mother did the same to me, but I have to let it go. I hope she can too.”

Tommie comes back and opens up. She says “I thank my mom for a lot. These women who are out here they thank me for not being a ho and I thank my mom for that.” KK joins the cast remotely. She tells them “Tommie is an actress and she has everyone on that stage fooled.”

Tommie unleashes and fires on KK. Tommie leaves the stage. Nina asks KK what happened.  KK says “The night of Momma Dee’s BBQ Tommie texted me threatening my dog. Then when I didn’t respond she came at me again on social media,” Nina says “What can be done to make this better?” KK says “Tommie needs to publicly apologize to me and thank me for bringing her to Love and Hip Hop and changing her life, otherwise she is going to jail.”  Tommie isn’t hearing any of that.

When they return Melissa is on the hot seat. Nina asks Melissa “How were you able to have so many alliances with people who don’t get along?” Melissa says “To me it was just on the show.’” She asks Mimi “How come karlie gets a pass on being friends with Joseline but Melissa doesn’t?” Mimi says “Karlie doesn’t get a pass.” Karlie says “My approach is different,” There are whispers between Mimi and Arianne. This upsets Melissa. She tells Arianne “You’re evil.” Arianne asks “How am I evil? Because my body looks better than yours and I eat right?” Melissa says “You’re body is supposed to look better than mine. You wear dresses.”

They then move on to talk about the demise of Scrappy and Bambi’s engagement and Scrappy’s move to Miami. Scrappy says “ I thought the relationships were just a waste, but they taught me something.” Nina then asks him if he was seeing someone in Miami. Scrappy says “No and the bed gets awful cold, but I keep the door open so they can wander through when they want to.” He also says “Just because you love someone doesn’t mean they are right for you.”