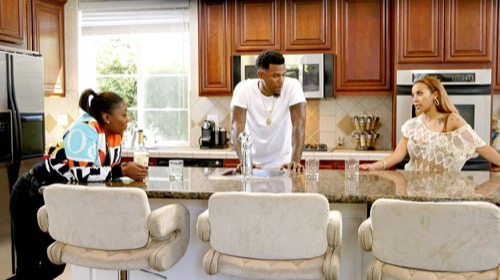 Tonight on VH1’s hit series Love & Hip Hop Hollywood returns with an all-new Monday, October 9, 2017, episode and we have your Love & Hip Hop Hollywood recap below for you.  On tonight’s season 4 episode 13, “Brooke devises a scheme to expose Marcus and Bridget; Fizz makes a daring move on his quest to reassemble B2K; A1 helps Lyrica face an emotional hurdle; Masika and Hazel come face to face; and Moniece serves Alexis her walking papers.”

This week on Love and Hip Hop Hollywood everyone is at the Xen lounge for a performance. Moniece is still upset about her break-up with AD. Misster Ray asks her “Do you really want AD back after Alexis has been all over her?” Moniece says “She’ll have to be cleaned up.” While they are talking Ray’s phone is blowing up and he receives notice about the song that Zell and Hazel did about him and Masika. When Masika steps off stage she sees them watching the video. Masika is not impressed.

Keyshia is meeting up with her dad, who she found out a year ago was Virgil Hunter. She is amazed that the two of them have such a great relationship. She tells him “I think it is such a great thing that I met you. I feel like when God sent you in my life it was a blessing because I needed that protection.” Virgil tells her “I feel blessed too because I feel like it is a chance to make up for my past mistakes.”

Brooke is getting back to her music. She is meeting with a music guru named Donnatella. She tells her “You can’t put all of these girls in the same room.” Donnatella wants to work on a song with Brooke. When she plays the song for Brooke she hears Bridget Kelly singing her song. Brooke is pissed and tells Donnatella “That’s not the right version.” Donnatella agrees. Brooke says “I’ll get the right version for you and the two ladies part ways.

Brooke and Apryl are wine tasting. Brooke is there to really confront Bridget about singing on her track. Fizz also shows up at the wine tasting to talk to Apryl about the B2K reunion. Apryl tells him “You know how Omarion is. He sees the messages and if he doesn’t want to do it he won’t do it.” Things quickly get heated between Brooke and Bridget. Bridget reveals that she reveals that she went to Catalina with Booby. Brooke laughs and tells Bridget that she had been invited to Catalina by Booby first, but chose to go to Marcus’ mom’s birthday party.

Masika and Alexis meet up to try and clear up their differences. Masika throws some papers on the car and tells Alexis “Here is a plane ticket for you to leave my city.” Alexis is angry and tells Masika “I’m not going anywhere. You’re just mad because I’m here to confront you about the dirt that you did.”

Fizz is undeterred about the issues with the B2K reunion He wants to have Ray J take Omarion’s place since Omarion is not responding to his messages. Ray is excited to work with Omarion and the rest of the group. He tells Fizz “This could be the opportunity that I have been waiting for.”
The night of Marcus’ listening party arrives and everyone is there. Lyrica invites Lucci to her listening party, but she tells him “Alexis is going to be there so don’t bring your little troll with you.” Lucci laughs and tells her “Just because of that I am going to make sure that Chanel is there. They are both grown women and can handle being in the same room.” Lyrica doesn’t agree and tells Lucci that she doesn’t want Chanel at her party.

While they are talking Brooke walks up to the group determined to get answers from Marcus about why Bridget was on her track. She has the DJ play the track. Marcus is stunned to know that Btooke has heard the track that he was working on with Bridget since he’d never told her about it. He asks her “Where did you get that?” Brooke ignores him and asks Bridget “Why is your voice on my track?” Bridget tells her “I was working on a song that Marcus asked me to work on because you bailed on him.” Brooke then asks her “What business is it of yours to go telling Marcus what I’m doing with Booby?” Bridget tells Brooke “Marcus is my friend and I felt like he had a right to know.”

The argument deteriorates as Bridget tells Brooke to mind her own business when Brooke accuses her of stealing Booby from her. Bridget says “I was in Catalina with him and he wasn’t thinking about you.” Brooke fires back and tells Bridget “I don’t care if you were bouncing up and down on Booby.” Then she turns around and storms out of the club.

Lyrica meets up with Keyshia to apologize for her behavior when she’d seen her and A1 in the studio. Lyrica says “It was just a problem between A1 and I because I wanted to give my twin sister that died the tribute that she deserved.” Keyshia tells her “I understand. I just recently found my father and knowing him makes things that much better.”

Lucci and Chanel meet up with Alexis before Lyrica’s listening party to try and sort out their differences. Lucci tells Alexis “Lyrica invited me to her listening party, but she told me that I couldn’t bring Chanel because you two have an issue with each other.” Alexis is not hearing it. She tells Lucci “I don’t have a problem with anyone as long as they don’t disrespect me.” Chanel agrees and they shake.

The night of the listening party is a huge success. When the ladies show up Ray is upset. Alexis tells him “You really disrespected Hazel.” Ray says “I don’t care.” A1 leaves that drama aside and goes to talk to Lyrica. He congratulates her on her success. Lyrica tells him “There is just one more thing we have to do before we leave for the tour.” A1 asks her “What’s that?” Lyrica tells him “We have to go to Adia’s grave so I can say goodbye to her.”

When they go to Adia’s grave Lyrica is super emotional, but she tells A1 “I finally feel like I got closure.” A1 hugs her and tells her “Your sister is proud of you.”

As the ladies prepare for the showcase the promoter tells Them that someone else will be joining the showcase. Brooke is happy that Bridget is not going to be singing her song, but Bridget is still upset about the whole situation that happened with her and Booby. Everyone is stunned when Masika walks into the room and instantly a fight breaks out between her and Hazel over the dis track that Hazel did with Zell. There was an immediate physical confrontation and they had to be broken up by security.