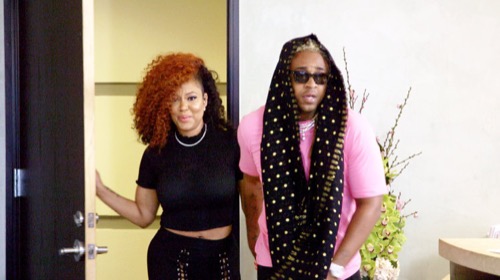 Tonight on VH1’s hit series Love & Hip Hop Hollywood returns with an all-new Monday, July 31, 2017, episode and we have your Love & Hip Hop Hollywood recap below for you.  On tonight’s season 4 episode 2, “Make It Count,” as per the VH1 synopsis, “Ray J’s struggle to start a family leads to an outrageous bet with A1 and Safaree; Keyshia gets advice from Too Short; Nikki Baby connects Chanel West Coast with a producer; and Brooke goes on a mission to uncover the truth about Ma.”

This week on Love and Hip Hop Hollywood Ray J and A1 meet up to have lunch. Ray tells A1 “I’m ready to have a baby! Are ya’ll ready to have a baby?” A1 says “I’m still wearing condoms!” Safaree is there too. Ray is worried about his sperm count so he tells his guys “I think we should all go to the the Dr and get our sperm count checked. The loser has to get Hazel E on the phone.” The guys laugh and make the bet.

Bobby meets up with Brooke. She asks him “Are you going back to basketball?” Booby says “I got some things lined up overseas.” Brooke asks “Are you trying to leave me?” Booby says “No no no. The music will never stop for me. But I want to know what’s up with you.” Brooke says “I have been dealing with Marcus but I found out that he is still married. His mom told me. However, he does want to meet up with me so I am going to see him.” She then asks him about his situation with Keyshia. Booby says “I’m just trying to focus on being a better me so i can find a woman like you who’ll be down for me .”

Moniece is meeting up with her friends and they clue her in on what happened with Alexis at their Karaoke night. A.D says “Apparently these three women all have problems with Masika messing with their men and it has created drama. Alexis Sky is mad because Masika had a baby with her man. Nikki is mad because she had something going on with her man.”

Marcus meets up with Brooke and presents her with finalized divorce papers. He tells her “When I realized the divorce wasn’t final I realized that I had two choices. Either I handle it or I tell you and I didn’t want to lose you.” Brooke is happy to get the papers. She tells him “In the future I need to know everything.”

Keyshia meets up with Too Short to discuss her co parenting situation with Booby. When she tells him that they are still living together he is blown away. He tells her “That is how people end up in jail.” Keyshia says “Hold up.  This is working for us.”

Ray, A1 and Safaree are at the fertility clinic when Lyrica shows up. The fellas are shocked and surprised to see her. She is just as surprised to see them. They tell her “We are here to see who has the healthiest sperm count.” Lyrica is blown away. She says “This is too much for me. I thought we were going on a dinner date.” Ray says “It’s daytime!”.

Alexis meets up with Zell. He asks her “What’s up with you?” She tells him “I don’t have an issue with you. You just got in the way.” Alexis tells him “You just let Hosika know that I’m here and i’m not going anywhere. She’s going to have to keep seeing me.” Zell tells her “Maybe I can make something happen and get the two of you together.”

We are introduced to Chanel West Coast. She is a friend of Nikki’s so Nikki shows up to her listening party. Lyrica is also there. Chanel talks about her struggle and Nikki agrees to try and help her get her music career off the ground. There is another lady there who joins the ladies and she reveals that she had been dating Rich Dollarz, but that Moniece had played a role in the breakup of that relationship along with Rich’s daughter. She tells the ladies “Now I’m back home and dating Marcus Papa.” The ladies seem shocked to hear this because they all know Marcus. They ask “Isn’t he married?”  She says “Yes, but he is getting a divorce. The  marriage has been over for awhile.”

Keyshia is at home when Booby comes downstairs to leave e for the gym. She tells him “It’s time for us to file these papers and go ahead with this divorce.” Booby thanks her for all that she did for him after his basketball career ended. He tells her “I just wanted to say thank you for all that you did for me when I came to you and I was down.” Keyshia becomes really emotional. She says “Thank you for that. You’re an awesome father, but I don’t want DJ to get too comfortable with us being in the same home.” Booby says “Do I have to go tomorrow?” Keyshia says  “No, but it needed to be soon.” Booby understands.

Nikki takes Chanel to meet Safaree. He puts her to the test and asks her to rap for him. Chanel is a bit flustered, but Safaree sees promise in her. He asks her “What is that you’re looking for?” Chanel tells him “I’m just looking to get my face and my music out there to the fans.” Safaree invites both ladies to his coconut suntan oil release party. He tells them “I probably won’t have a shirt on. There will also be a stage set up and we will see about you performing.”

Lyrica is at a dance class with Brooke. After the class they all sit down to talk. Brooke tells them about the divorce incident. Lyrica tells her “I have something to tell you and you’re not going to like it.” Lyrica then drops the bomb on Brooke about Jade. Brooke says “I need to holler at him, but I need to holler at her before I smack his head off.” The ladies decide to crash Safaree’s party to meet up with Jade and try to figure out what’s really going on.

Ray, Safaree and A1 head back to the clinic to get the result. It turns out that A1 has the highest count. Ray is worried. Safaree comes in second which means Ray comes in last and has to work with Hazel E. The other issue is that Ray has to bring his count up so that he and Princess can have a baby. The guys tease Ray unmercifully. Safaree tells him “I already have the name of the track. Shortcomings!”

Zell meets up with Masika to discuss the situation with Alexis Sky, but Masika is not having it. Zell is angry as well. He doesn’t want to keep dealing with Masika’s drama. He tells her “ I got drinks thrown at me because of you.” The argument intensifies and Masika storms off.