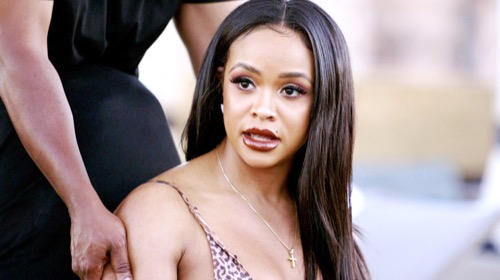 Tonight on VH1’s hit series Love & Hip Hop Hollywood returns with an all-new Monday, August 21, 2017, episode and we have your Love & Hip Hop Hollywood recap below for you.  On tonight’s season 4 episode 5, “Spirit Animal,” as per the VH1 synopsis, “Mayhem erupts at Safaree and Chanel’s music video shoot. Misster Ray’s attempt to make nice with Masika leads to a wild encounter with Zell. A betrayed Teairra lashes out at Cisco, Moniece, and Nia.”

This week on Love and Hip Hop Hollywood A1 and Cisco meet up at L’Scorpion. While they are there Moniecee and Nia pop up and confront Cisco about taking Teiarra to a detox center. Cisco says “She literally came to me crying and said help me. I took her to detox and I did.” Moniece breaks down and tells him “She needs more. I have seen her and she is in real trouble.”

Hazel E is on a photo shoot with her new man Rose Burgandy. He is feeling a certain type of way while she is doing her thing. The photographer tells her “Let’s take a ten-minute break,” During the break Hazel and Rose talk about their situation. Hazel tells him “I got you a meeting with Safaree.” Rose seems happy to hear that. He tells her “If we are going to do this let’s go all the way.”

Alexis is still furious at Dro for the situation with his baby’s mom. While he is doing a live interview on a radio show she decides to pop up and confront him about the situation. She comes into the studio blazing and says “I see your baby mama’s still at it. Why would you allow her to pop up at my photo shoot?” Dro is furious and he tells her “You need to calm down.” The two women get into it again as Dro’s baby’s mom is in the studio with him. The two women begin swearing and clawing at each other until they are separated by security.

Chanel West Coast is working with Safaree in the studio. He asks her “What do you want to do next?” Chanel says “We have to do a video.” While they are talking Hazel walks in. Safaree wants Hazel to help with her video. Hazel says “The Chanel that I see right now is hippie and a little back woods, but we can work with it.” Safaree and Chanel agree to work with Hazel on the video.

Keyshia, Nia and Masika meet up to talk about the events that happened at Masika’s make up launch party. Masika says “They were throwing my products all over the place. To be honest I am kind of more mad at Mr. Ray because he invited Zell after I said not to.” Keyshia tells her “You can’t not talk to Zell.” Masika agrees. She says “Maybe we should get our toes done and try to work it out.” Moniece is worried about Tiearra. She tells Keyshia about the confrontation with Cisco and Tiearra’s drinking problem. Keyshia says “A real friend would do what’s necessary.”

Cisco and Teairra are in the studio. He is still upset about the confrontation he had with Nia and Moniece. He tells her “They came and confronted me and told me that you had a drinking problem.” Teairra immediately gets angry at Cisco and asks “What did you say? Did you defend me?” Cisco says “What could I say? I told them I took you to detox.”  Teairra gets really angry and storms out of the studio. Cisco follows her trying to calm her down. He tells her “Your friends are not your friends. They want to do some kind of intervention and put you in rehab.” Teairra says “I don’t have any friends.

Teiarra goes to Moniece’s house to go confront her about the situation with Cisco. She asks Moniece “What makes you think it’s ok to go talk to my man?” Moniece says “You have a problem. We felt like he needed to know.” Tiearra says “I don’t have a problem. Let’s get it straight. I don’t wake up with a fifth in my mouth. Sometimes I drink a bit too much, but i can control that.” Moniece fires back and says “Don’t you think that’s a problem? Cisco told us that you went to him crying that you needed help.” This fires Teiarra up even more. She says “I don’t need people talking about a problem that I don’t have behind my back. Those are not true friends.” She storms off and Moniece walks back into the house.

Moniece is out with AD. They are talking about the situation with Teiarra when they are joined by Mr. Ray. Moniece tells Ray “We had a different level of expectation from you.” Ray says “Zell was the one that came across the table like a wild man.” Moniece tells him “Well I know that she is going to get her nails done with Zell.” When Ray hears this he is upset. He says “That is our thing. I’ll go and have a conversation with Masika and I’ll try to have a conversation with Zell too.”

A1 is working with Keyshia Cole. He has canceled with Lyrica to get in the time with her. Lyrica decides to pop up anyway and is a bit upset when she finds her husband working with Keyshia. They finish the session and Keyshia tells Lyrica “I hope when I come back you and I can work together.” Lyrica goes ballistic once Keyshia leaves and tells her husband “Don’t you think I want to work with Keyshia Cole too?” A1 says “You tell me you don’t want me to work with other females.” Lyrica starts to cry and says “We’re supposed to be working on my music and I find you in the studio with another woman.” The two have an emotional confrontation and Lyrica storms out. When she returns she tells A1 “If I keep walking I am gofing to walk right out of this marriage.” A1 feels bad for leaving her out. He tells Lyrica “You’re right. Without you I wouldn’t be as successful as I am. From now on there won’t be any sessions that you aren’t invitned to.” The couple makes up and heads home.

Safaree and Hazel are working when Chanel arrives for her video shoot. Hazel’s boyfriend is there to help with the styling, but there is imediate tension between the two women as Chanel is not feeling Hazel’s fashion suggestions. Then Hazel wants Chanel to learn an 8 count dance step to go along with her back up dancers. Chanel tells Hazel “That’s not going to work for me. I’m going to need you to back up and just let me do my thing.” Hazel is immediately offended. She tells Chanel “I’m here to help you, but you don’t have a clue what you’re doing. Chanel is offended and the two women come to blows.

Masika and Zell meet up to talk. Zell tells Masika “I’m sorry for the way I acted at your party.” He also tells her “I was glad to get the invitation to your party.” Masika tells him “That was Ray’s idea actually.” Zell laughs and says “I don’t know what that guys problem is with me.” While they are talking Mr. Ray blows in to the nail salon. Both Zell and Masika are surprised to see him. He greets Masika and then tells Zell “If you can control your animal instincts I’ll talk to you too,” Zell asks “What animal do I act like?” Ray “Well last night when you lept over the table you acted like a Tasmanian Devil.” Zell gets angry and lashes out at Ray again and once again the two men have to be separated by security.