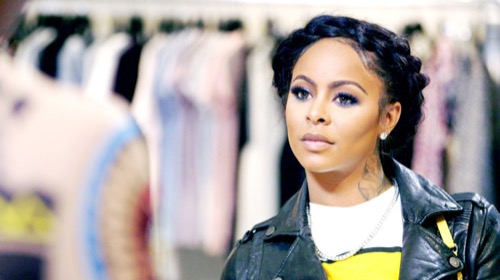 Tonight on VH1’s hit series Love & Hip Hop Hollywood returns with an all-new Monday, September 4, 2017, episode and we have your Love & Hip Hop Hollywood recap below for you.  On tonight’s season 4 episode 8, “Squad Goals,” as per the VH1 synopsis, “The beef gets physical between Moniece + Alexis Skyy.  Alexis tells Zell and Lyrica about her fight with Moniece. See what happens when the two run into each other again.”

This week on Love and Hip Hop Hollywood Lyrica and Alexxis meet up at Tags to dress for Lyrica’s listening party. Zell shows up to help them pick out clothes. Lyrica tells them about the incident the other night between her and Moniece. Alexis then tells them about her post on Instagram. Zell says “I heard you got beat up.” Alexis laughs. Zell says “I think I can be friends with both sides.” Lyrica says “Can you? Because I have been blasted for trying to be friends with everyone.”

Moniece is out with A.D. and Mister Ray. She tells them about the fight that she got into with Alexis. Mister Ray says “I want to go to the listening party because I have something to say to hottie popping.” A D says “I don’t think it’s a good idea.” Moniece tells him “Come with me to the listening party and you can confront little miss hottie.” Ray is down with that plan.

Brooke heads over to Booby’s new apartment. There is definite tension between the two of them. She is upset because he had company at his house the other night. He tells her “You’re trying to tell me what I can and can’t do, but what about you? What can and can’t you do?” Brooke tells him “I don’t know what I’m going to do about Marcus yet.” Booby tells her “Whatever you decide to do I got you.” She asks him about his music and he plays the new track for her. She tells him “That’s hot. I really like it.” Brooke is so impressed that she decides to invite Booby to Lyrica’s listening party. She tells him “You’re coming with me to Lyrica’s party and you’re gonna be my plus one.” Booby says “I’m with it.”

Nikki and Teairra meet up to talk. Teairra tells Nikki about the situation with Cisco. She says “It looked like a movie scene.”  Nikki asks her “Are you all right? Because word on the street is that you and Hazel got into it.” Teairra says “The one thing that Hazel and I promised each other is that we’d never get physical, but she thinks I’m talking about her. I could care less about her.” Nikki says “I invited both of you to my event. All I’m asking for is one night.” Teairra agrees.

Lyrica’s listening party is a huge success until Brooke walks in with Booby. There is immediate tension. Lyrica asks “Where’s Marcus?” It seems like there is tension between Brooke and Hazel E over Booby. All of a sudden Moniece and Mister Ray come walking through the door, They approach Alexis and the confrontation is on and poppin. Lyrica steps up and tells Moniece “I can be friends with whoever I want to be friends with. I didn’t have a problem with you until you threatened to beat my ass so now what!” The whole party has stopped as the three women confront each other. Lyrica is highly upset that Moniece and Mister Ray have busted up her party.

Ray and Princess are meeting with a fertility shahman to try and help with their fertility issues. Ray is not really into the whole idea of the rituals. He seems a bit disconnected. The Shahman asks Ray J “How do you feel about being a father?” Ray says “I feel good.” She asks him “Do you hang out with alot of kids?” Ray says “Nope.” After the lady leaves Princess is upset with Ray. She tells him “I kind of think there is some truth to what she is saying.” Ray tells her “I am just thinking about the next step in convincing you I am ready to be a father.” Princess tells him “Don’t convince me, convince yourself.”

Nikki is trying to once again get Teairra and Hazel to work out their differences by inviting them both to her event. However, it does not go well. As soon as the two ladies come face to face they come to blows. Nikki steps in and tries to calm Teairra down. Teairra says “I’ve had it.” Hazel is also over it. Nikki apologizes to Hazel. Hazel tells her “It’s her disease. She acted like this when I lived with her. Until she can come and talk to me with a clear head I’m done.”

The next day Moniece is meeting with a vocal coach when Nikki shows up to talk to her about the situation with Teairra. She tells Moniece about the incident at her launch party. Nikki says “I want her to get help before it’s too late.” Moniece says “I tried and Cisco got in the way.” Nikki says “I feel that now that he’s not in the way we should get together and try again. Would you be willing to help?” Moniece is a bit reluctant but says that she would be willing to try again to help Teairra.

Princess meets with her friend and talks to her about the issues that she and Ray are having with getting pregnant. While they are talking Ray walks up with his business partners little girl. He tells Princess “We are keeping her for tonight and taking her back tomorrow.” Princess is impressed by Ray’s efforts. Princess asks him “Did you get all the stuff you need to take care of her?” Ray says “No. that’s why we came up here.”  Princess just shakes her head.

Ray is taking care of Stevie. Princess comes in and tells him “It smells like she needs her diaper changed.” She then tells him “You can’t just play with her all day you have to take care of her.” They get the diaper changed successfully. Princess is happy. She says “You’re really into this?” Ray says “I really want to be a good dad. I’m not gonna let some crazy witch tell me I’m not gonna be a good dad.” Ray also tells Princess that his sperm count has gone up to 48 million. She asks him “Are you ready to have a baby?” He tells her “I’m ready to have a baby.”

Teairra decides to show up at Moniece’s house for the party and is blindsided by the intervention that has been set up for her by her friends. She is not happy about the ambush…