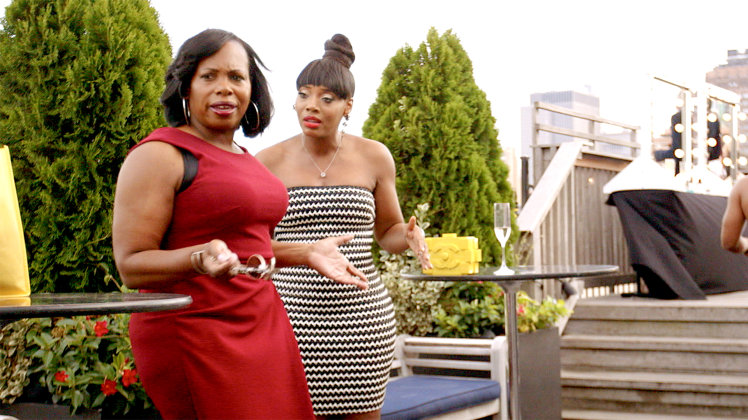 Tonight on VH1’s hit series Love & Hip Hop returns with an all-new Monday, November 6, 2017, episode and we have your Love & Hip Hop recap below for you.  On tonight’s season 8 episode 2, “Rubbed the Wrong Way,” as per the VH1 synopsis, “Judy pops up to Yandy’s event with a special gift for her; Safaree and Dreamdoll connect and sparks fly; NY artist Jaquae tries to mediate the situation between Bri and Bianca; Navarro introduces Anais to Rich; and Mariah-Lynn has a new man in her life, but things go a little unexpected when he tries to stir some trouble with Self.

This week on Love and Hip Hop New York DJ Self has Papoose on his show on Hot 101 in New York. Pap is working on his own career. He is promoting his new record out featuring a new young artist named Jacque. Self tells him “I applaud you for helping the young guys come up.” Self also congratulates Remy on her award for best female rap artist.

Judy is all in Yandy’s business. When Mendecess calls she tells him “I saw Yandy and she was rubbing oil on some guy. She claimed that she was working but I didn’t believe her.” Mendecees asked if she left. Judy tells him “No. I let her know that she is going to be seeing more of me. I think I need to keep a real close eye on her.”

Navarro introduces Anais to Rich Dollarz hoping to get them connected on a management level. Rich is instantly attracted to Anais. Navarro tells Rich “Ashley doesn’t like me working with her.” Anais says “I can’t help it that Ashley can’t control her man. I have to use what I got to get what I want.” Rich is even more drawn to Anais and there seems to be an instant chemistry between the two of them. He worries that she is going to take him back to his creep squad days. Anais asks Rich “Are you taken or are you single?” When Rich reveals he is single she is instantly more intent on flirting with him. She skirts around him and once again it seems that Rich is going to find himself in trouble.

DreamDoll is performing and DJ Self is watching when Safaree comes in. Self-welcomes him back. Self-tells him “Safaree I know you are the right man for the job, this job. DreamDoll.” Safaree is impressed by her. He tells her “I like your voice. You definitely have a good voice.” She thanks him. He tells her “We should definitely link up.” DreamDoll agrees.

Bri is frustrated by the situation with Bianca. She goes to see her friend Jacques to work out her anger. When they take a break she tells him “I don’t know what’s wrong with Bianca, but she is really spazzin out.” He asks her “What happened?” Bri tells him “She threw her shoe at me in the middle of an industry party.” Jacques tells her “You two need to work it out. Maybe I need to be there.” Bri isn’t really feeling it, but agrees to try and sit down and talk things out.

Yandy is hosting a launch party for her new beauty skin care line. Her friend Fernando is there along with everyone else. She tells the group about Judy bursting in on her photo shoot and accusing her of doing inappropriate things with her client. While the group is talking Judy walks in uninvited. She holds up a wrap and asks Yandy “Don’t you think you might want to put this on?” Yandy tells her “No. I don’t think so.” Yandy also tells her “I don’t know what your motive was for calling your son, but now we have a problem.” Judy says “I didn’t like what I saw and I told him so. He asked me to keep an eye on you.” Yandy is extremely frustrated and embarrassed by Judy’s behavior.

Mariah Lynn has a new man named James and a new single out. She invites him to her single release party. She tells him “My boss is going to be there and I need you to play nice.” Janes is not happy. He thinks Self is trying to get to close to Mariah. Mariah isn’t having any of it. She tells James “He is just my boss.” James doesn’t seem convinced, but he tells Mariah “I will be there and I will play nice.” Mariah is happy to hear this.

Navarro’s girlfriend Ashley is working with models on their fashion line when he calls her. He tells her “I have to head out of town with Anais. We have to have a meeting.” Ashley is not happy. She tells him “You know that I don’t like it when you go out of town with her. I told you I had to be there.” Navarro says “Well can you cancel them?” Ashley agrees to let Anais know that the meetings are off. Her sister overhears the conversation and tells Ashley “Just make sure when you check her to keep it professional because at the end of the day you still have to get that check.” Ashley agrees, but she says “The minute she steps out of line with me I am going to check her.”

Safaree and Dream Doll go out on a date. They have a great time and seem to make a great connection. Safaree tells her “I think my mom would really like you once she gets to know you, but her first impression would be pretty harsh.” Dream Doll wants to know why. Safaree tells her “Well you are out there with the way you dress and all that.” Dream Doll laughs and says “I know how to dress when meeting someone’s mom. This is all for show.” Safaree laughs and tells her “You have beautiful lips.” The two kiss.

Jacquae is meeting with Bianca to get her side of the story about her issues with Bri. He tells her “There is a lot of money out there and you are out here throwing shoes at an industry event?” Bianca pops off and flies off the handle about Bri. She says “If I take off my $1700 shoe and throw it at you I don’t think that you’ll want to see me.” Jacquae tells her “I want the two of you to sit down and talk and work it out.” Bianca is not having it.

Anais is expecting Navarro to show up for their meeting. When she opens the door Ashley is standing there. Anais asks “Where’s Navarro?” Ashley tells her “He’s not coming. The two of us need to talk.” Anais doesn’t want to hear it. She tells Ashley “No we don’t.” Ashley says “You know Navarro and I are partners right?” Anais says “Yeah so?” Ashley goes on to tell her “Well that means you need to respect me too.” Anais just laughs at her. This fires Ashley up and the argument quickly intensifies. Anais acts like she could care less about what Ashley is saying and asks her “Are you mad?” Ashley leaps across the table and security has to catch her and separate the two ladies.

The night of Mariah Lynn’s single release party arrives and everyone is excited. James steps up on stage and gives a short speech. Mariah is not happy. James is not happy that Self cut his mic off. After the single drops James confronts Self about the relationship between him and Mariah. Self tells him “Here’s what I want you to do. I want you to shut me up.” The confrontation between the two men gets more heated and Mariah comes over to interrupt. Self tells her “This man wants to tell me about your career.” Mariah hops up on the table and tells James “I feel like I have to get up on the table to tell you how it goes. This is my boss.” James is frustrated that Mariah doesn’t have his back and he storms out of the club.