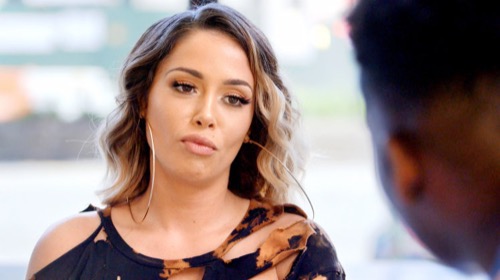 Tonight on VH1’s hit series Love & Hip Hop returns with an all-new Monday, December 4, 2017, episode and we have your Love & Hip Hop recap below for you.  On tonight’s season 8 episode 6, “Puppy Love,” as per the VH1 synopsis, “Remy Ma invites Lil Mo to her store opening, but an uninvited guest pops up. Yandy and Bianca put their professional relationship on the line. Rich debates telling Navarro about his relationship with Anais. James R surprises Sophia with a gift. Jaquae gets angry.”

This week on Love and Hip Hop New York Rich meets up with DJ Self at Wood Stack to talk to him about the situation with Anais. He tells Self “Here’s where the problem lies. A husband and two children.” Self tells Rich “The husband is gonna kill you dude.” Rich says “The first conversation I need to have is with Navarro. I need to let him know I smashed his artist.” Self wonders why Rich isn’t worried about Anais’ husband. Rich says “I don’t know the husband. Navarro is my brother.”

Mo meets with Remy to discuss the situation with Karl. She tells her “I had him take a lie detector test and it showed that he was being deceptive. We sat down with Dr. Jeff and tried to work things out, but I’m so hurt that I don’t know what to do. I’m not running away this time. I’m sticking around because I want this to work, but I’m so hurt.” Remy invites Mo to North Carolina for the opening of her new store. She tells Mo “I think that you need some time apart to sort things out. Ya’ll need some time to sort things out.” Mo agrees to go with Remy.

Yandy is upset about Bianca’s behavior and how it is affecting her business. She meets with Bianca under a bridge to discuss the issues they have in their business relationship. Yandy tells Bianca “You can’t keep popping off in clubs and acting the way you acted the other night. You never know who could be watching and judging your behavior.” Bianca tries to defend her behavior. She tells Yandy “That guy popped up somewhere that he didn’t belong and confronted me. I wasn’t just going to sit back and let him talk to me like that. Why is it ok for guys to pop off, but not for women?” Yandy tells Bianca “I have a lot of stress in my life, but you don’t see me acting a fool in the club. I don’t think this business relationship is going to work out between us. I wish you the best.”

Rich decides to meet up with Navarro to play golf and tell him the truth about what happened between him and Anais. Rich asks “What’s up with you and your old lady?” Navarro says “I think that now that we have this thing settled with Anais she doesn’t want this as much as I do.” Navarro then reveals that his dad passed out in a diabetic coma. Rich is shocked to hear that. He tells Navarro “That’s crazy. You know that I have diabetes too right?” Navarro is stunned to hear this. Rich decides not to tell Navarro about Anais just yet.

Anais meets up with Jonathon to try and work out their relationship, Jonathon tells her “I’m so sorry for all of the stuff that I said to you. I want us to be friends again.” Anais says “I want the same thing. We have been friends too long for us to just stop speaking and fall out.” Jonathon goes on to tell him about his love life. He reveals that he is dating a singer, Anais is shocked to hear this, but she drops a bombshell of her own when she tells Jonathon about her affair with Rich Dollars. It looks like the friends are back on track.

Remy, Papoose and Mo are at the grand opening of Remy’s store in Chicago. Mo is so happy to be around Remy and Pap. She tells them “My husband is kind of getting on my nerves, not that he is smothering me or anything, but he was all over me about coming down here.

All of a sudden Carl pops up at the grand opening. Mo is not happy to see him at all. She tells him “If you want to have this conversation we’ll do it outside. I’m not going to do that here.” They step outside and Mo is very upset. She asks him “What did you come here for?” Carl tells her “I came to see you.” Mo says “If this was my event I could pull to the side.” Carl asks her to listen to him. He tells her “ It’s always been us against the world. I’m sorry I hurt you and I don’t ever want you to feel that way again. I’ll do whatever it takes to make things better.” Mo tells him “If you want to make things better then we have to move together from now on. When you move, I move. Where ever you go there are going to be females there and they aren’t always going to be there for the right reasons.” Carl agrees and they hug.

Back in New York Bianca shows up at Jacquee’s restaurant to tell him about Sophia being at James R’s video shoot. While she is there Sophia shows up and Jacquee confronts her. He tells her “I heard that you were rocking with James R and doing videos when you said you weren’t doing videos anymore.” Sophia tells him “Me doing a video with James doesn’t mean that I’m rocking with him. Besides his little rat Mariah attacked me.” Bianca pipes up and asks Sophia what she called Mariah. Sophia repeats herself. Jacquees asks her “What are you going to do about it?” Sophia says “We can forget about it and move on.” Jacquees says “No. I’m going to do something.” Sophia wants to know what he’s going to do. He tells her “Think about it and let me know when you figure it out.” She fires back and tells him “Fine. I will.” Then she storms out of the restaurant.

Jonathon is watching his man Trent rehearse. When he finished Jonathon tells him “You sound so good, but why are we in a church?” Jonathon tells him “I miss you. We need to spend more time together.” Trent says “I miss you too, but right now I need to focus on getting this album out and getting things done.” Jonathon says “I want us to spend more time together so I will come to your rehersals and sessions if you can make time for us to have real dates.” Trent agrees.

Sophia meets up with James. He apologizes to her for the incident with Mariah at his video shoot. She tells him “I just wish you had told me that you two were still together so that I could have been better prepared for her. I don’t one hundred percent forgive you, but this is a start.” James is determined to get Sophia’s forgiveness and impress her. He leads her into the park and presents her with a beautiful puppy. She is instantly in love. She asks him “How did you know what my favorite puppy is?” James laughs and says “I did some asking around.” Sophia takes the puppy home with her.

Sophia decides to take the puppy home. Jacquees is cool with the dog at first until he hears that the dog came from James R. He tells her “Understand where I’m coming from. You can’t be living with me and accepting gifts from other men.” Jacquees tells her “Get everything and get it out of my house. You can take everything I bought and take it with you. Get everything out of my house.” At first Sophia tries to reason with Jacquees, but he is not having it. Eventually she tells him “Fine, I’ll be back for all the furniture I bought.” Jacquees tells her “You don’t have anything else here!”