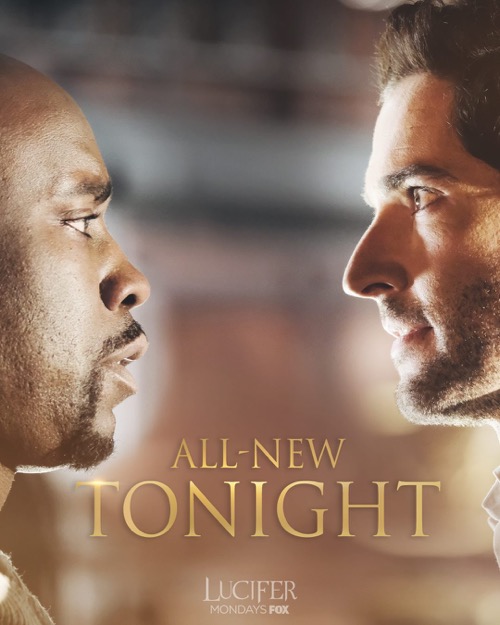 Tonight on FOX their drama Lucifer airs with an all-new Monday, October 16, season 3 episode 4 called, “What Would Lucifer Do?,” and we have your weekly Lucifer recap below. On tonight’s Lucifer episode as per the FOX synopsis, “When a youth counselor is found murdered, Lucifer and Chloe venture into the world of high-end reform programs to find the killer. Meanwhile, Amenadiel adjusts his lifestyle in an attempt to help Lucifer; and Chloe questions Lt. Pierce’s feelings towards her.”

Lucifer is in bed next to a blonde sipping champagne. Her husband comes home early. She jumps up and freaks out. He has this, he tells her. He goes down the stairs to see the husband. The husband is thrown off guard and becomes angry. Lucifer asks him straight in his eyes – what does he want? The man wants a nap. He doesn’t want to be the cliché any longer who married his yoga instructor. He wants to go back to his ex who was mentally stimulating. The deal, Lucifer tells him. He will take the yoga instructor off his hands!

Chloe goes in to see the boss. A body has been discovered on the grounds of the Firehawk youth home. She heads out and on her way she sees Ella, who was watching them through the window. She thinks the boss has a thing for Chloe.

Ella is taking photos of the victim while Chloe looks around and they exchange information. Lucifer shows up. Ella finds a tool belt that is missing a tool – a knife. The head with the owner of the youth home to check the tool assignment sheet. They know who took the knife. A kid named Tyson Chase. He is missing. Lucifer isn’t surprised.

Amenadiel hits the town looking for a lady he can take home.

Chloe is back at the precinct trying to look into the records of Tyson. They are sealed. The Lieutenant wants an update. Chloe gives him one. He is annoyed. He figured she would have made more progress by now. Chloe doesn’t know why he is so hard on her. She thinks it is Lucifer. She calls him over and tells him to stay behind.

Lucifer heads to the house of the man whose wife he slept with. He asks him for a favor – helps him find Tyson. He does. Lucifer tracks him down on the side of the road in a convertible he stole. Lucifer takes him for a death ride, scarring the hell out of him. Tyson is ready to talk. Lucifer brings him in to see Chloe. He swears he didn’t kill Emily, he loved her. He wanted her to run away with him. They step out of the interrogation room. Chloe doesn’t think he is guilty. Lucifer does. The lieutenant is on the fence. Lucifer goes back in and scares the kid. Chloe calls in to tell him to stop. The lieutenant likes Lucifer’s style.

Lucifer heads back to the youth home. He calls all the kids over and tells them he is going to teach them deviance. They think it is a joke.  He wants to know what they all want. Minutes later, he is teaching them drug dealing 101 in the barn. One girl is way ahead of him. She brings him to her crop of pot.

Chloe shows up and finds them all in the barn with their pot empire. She is angry. What the hell is he doing? Chloe has come with news. Emily was on the verge of telling on one of the kid’s for growing and selling pot. Chloe hauls in Kylie, a girl who started the pot crops.

Amenadiel is in jail. The lady he picked up was a hooker. Dan arrives to get him out.

Kylie’s father comes in. He is a lawyer and proves his daughter has a solid alibi. Kylie also noticed Tyson buried something by the sundial. Chloe and Ella go out and dig in the dark while Lucifer hangs out. They found something and the weapon are linked to Tyson, his pruning saw.

Chloe doesn’t think Tyson is the killer. She wants to go out and investigate more. Lucifer has a date. The lieutenant wants to ride along. Chloe is angry. She confronts her boss while they walk up to the youth house. The owner of the home comes out and shoots at the lieutenant. He has been shot in the abdomen. Chloe fires a few shots. The man takes off. She calls in back up.

Amenadiel and Dan go out for a drink. Amenadiel tells Dan that his father is trying to teach him a lesson. He doesn’t know what that is so he has been trying to walk in Lucifer’s shoes and do what he does.

Lucifer shows up to help Chloe. She’s upset but fine. She takes off. Lucifer is mad at himself for not being there for her. He tracks down the youth director. He is on a dock, packing up to leave the country. Lucifer yells to him. The man talks for a bit before pulling a gun. Lucifer goes after. He punches him repeatedly in a rage. Amenadiel stops him. He reminds him that he is the devil and he punishes evil. Lucifer stops.

Chloe visits the lieutenant in the hospital. The two bond. He refers to her as his best detective. He tells her she is special. Dan shows up. He wishes the lieutenant well and thanks him for referring him to a program Chloe has had her eye on. A program that Lieutenant  Pierce told her she was too good for.

Amenadiel and Lucifer get home and have a drink. Amenadiel thinks he has figured it out. He thinks Lucifer has changed and that it is his job to be there for him. Lucifer gets angry and throws his drink.