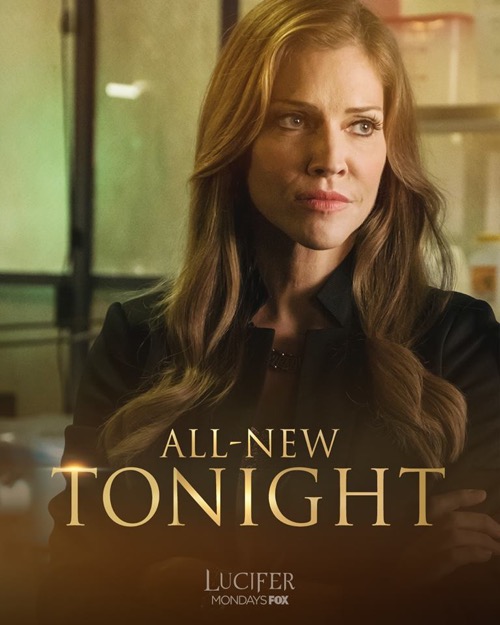 Tonight on FOX their drama Lucifer airs with an all-new Monday, October 30, season 3 episode 5 called, “Welcome Back, Charlotte Richards,” and we have your weekly Lucifer recap below. On tonight’s Lucifer episode as per the FOX synopsis, “When a food chemist is found dead, Lucifer and Chloe’s investigation pits them against an unexpected face—criminal defense attorney Charlotte Richards. Everyone is caught off guard when they see her back in the precinct. As Lucifer tries to understand her return, he makes a shocking discovery that helps solve the case.”

Pierce was on the mend. However, he wasn’t a man to give up working and had managed to give his detectives their marching orders from his hospital bed. So Chloe and Lucifer had a new case on tonight’s all-new episode of “Lucifer” though the death had become quite personal for some. The victim – Simon Fisher – had been the Senior Pudding Chemist at Pudding Plus and he had been found in the vat of his own pudding. And so Dan hated going to the crime scene because he loved Pudding Plus.

Dan had it every day and he loved it because it had more protein as well as fewer calories than any of the other brands. Though it was healthier than the rest thanks to the secret formula that Simon cooked up. So what no one could understand was why? Why did Simon fall in on that particular night? He’s been cooking the pudding for years and there were safety guards around the vat yet it was a little convenient that he fell in right when the security guard had gone on a bathroom break and so the detectives worked off the theory that his accident wasn’t an accident.

Chloe felt Simon couldn’t have fallen in on his own and she was feeling assured about that after she saw scuffle marks indicating a fight in front of the vat. Yet Ella couldn’t find any obvious signs. Her initial autopsy on the scene was telling her that the victim had died from the heat of the pudding and so she couldn’t find any definite signs that he had been pushed in, but everyone had hoped they would get answers from the security footage. There were cameras everywhere and that meant they must have caught something. So Chloe had requested the footage from the company’s CEO.

The CEO, Adrian Yates, had seemed very reasonable on the phone yet he later showed up with his lawyer rather than the security tapes because his lawyer advised not to hand anything over. But the lawyer was actually Charlotte Richards as in the real Charlotte Richards. She couldn’t remember those few months when she had been possessed by a deity and so she just pretended that those months never happened. Charlotte went on with her life and hew law firm. So she had only come down to the police department to talk about her client’s defense while Lucifer thought she was playing something.

Lucifer had seen her and had automatically thought that she was his mother. Yet, when she failed to pay any attention to him, he simply assumed she was playing some sort of game with him or that his father was involved. So Lucifer got super paranoid about his father interfering with his life again and he kept trying to get in contact with Charlotte. Charlotte, on the other hand, couldn’t understand why Lucifer kept calling her and she had, unfortunately, give Dan the cold shoulder when he had tried to restart their relationship. And so she had no idea what was going on.

Charlotte had thought there must be a reasonable explanation for why her job had fallen by the wayside, why she had lost custody of her kids, and why she had broken Dan’s heart. Though she dropped to the wrong conclusion. Charlotte went over to Lucifer’s because she thought she had left her husband and her lover for her and so she kissed Lucifer the next time she saw him however it had been an awkward experience after Lucifer pushed her away. So she finally admitted to him that she didn’t remember.

Charlotte recalls waking up on the beach, but before that, she said that she had felt trapped and kept reliving the worst moment over and over. Almost like she had been in hell! However, Charlotte told Lucifer that she couldn’t have gone to hell. She said she paid her taxes and wasn’t evil. So Lucifer told her that she might have felt like she had been in hell because that’s what she thought she deserved and he told her that she could change her life around. Like helping the LAPD with their investigation rather than hindering it because the detectives needed all the help they could get.

Lucifer and Chloe had talked to Pudding Plus’s biggest competitor and they found out Heavenly Pudding had no reason to kill Simon because Simon was going to sell the secret recipe to them. But then they thought it could have been Pudding Plus, however, Pudding Plus and Heavily Pudding were carrying out a secret merger. So the two companies wouldn’t be competitors for long and so neither Pudding Plus or the company’s personal fixer had a motive. And so when Charlotte finally agreed to show the tape to LAPD, she helped them put two and two together.

Simon had looked as if he had been pushed when in fact he had thrown himself in to do one last good dead. The victim had been dying from retinal failure and he would have days left. However, he killed himself because he wanted the police to get their hands on the security footage and find out what had been in his secret recipe. It turns out it had been toxic chemicals that were harmless on their own though toxic when put together. So Simon had found out the truth after he learned he was dying and that’s when he tried to stop the company.

He tried to go to Heavenly Pudding and that didn’t work. Though getting the police to see the footage did and Charlotte had felt so heartbroken to find out she had been representing three potential murderers that she didn’t even wait around to find out Simon had committed suicide. She had just called her clients in for a meeting and then held them at gunpoint until they revealed to her who killed Simon yet Lucifer had thankfully gotten to her before she could hurt anyone and he had talked her down.

Charlotte didn’t need to hold her clients at gunpoint to be a bad person and her clients were all arrested anyway for what they knew about the secret formula. So they still stopped Pudding Plus from poisoning anyone else and Charlotte had actually apologized to Dan after he told her how sorry he was about everything she was going through. And while she may never be his mother, Lucifer chose to stick around and help Charlotte find that inner light she lost.