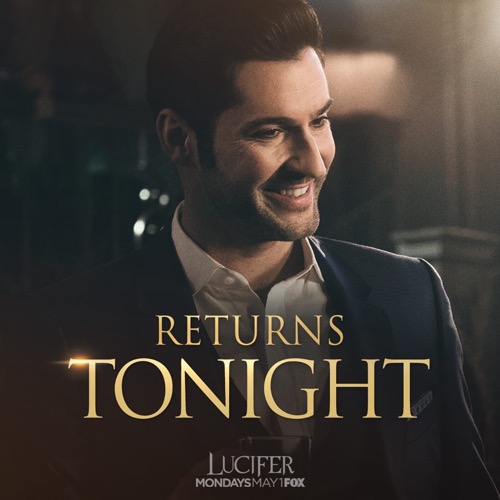 Tonight on FOX their drama Lucifer airs with an all new Monday, May 1, season 2 episode 14 called, “Candy Morningstar,” and we have your weekly Lucifer recap below. On tonight’s Lucifer episode as per the FOX synopsis, “Following Chloe’s near-death, Lucifer (Tom Ellis) disappears and cuts off all contact with family and the police department, but materializes in time to help solve the murder of an up-and-coming guitarist and introduce the department to a ditzy stripper, a new mystery woman in his life.”

Lucifer just left. He didn’t tell anyone where he was going or bother mentioning to Chloe was what was wrong! But Chloe eventually found a way to adjust and she had believed that she was over it. So it had come as a surprise when suddenly Lucifer came back after two weeks and he was married although he did have an excuse for that. He said that he had family issues and had needed time to himself so he went to Las Vegas and one thing led to another. And so Lucifer was now married to a woman named Candy.

Candy Morningstar was formerly a stripper. She had been dancing when Lucifer caught her eye and the two had gotten married in quite a rush. However, Chloe didn’t appreciate being ghosted by Lucifer for two weeks and so she didn’t want him working on Asher Corrigan’s murder. She said that their partnership was over and that she didn’t need him anymore yet Chloe did need him because her chief suspect refused to speak to her. He was apparently the mediator in Ash’s divorce and everyone thought it was odd that the mediator had showed up at the murder scene.

Yet, the mediator was smart and so Lucifer only got the chance to see him by making an appointment with Candy. So Lucifer had thought that Chloe would forgive him because of what he did and how he was making amends, but she refused to. Chloe had gotten really upset about Lucifer marrying some bimbo (her opinion) because she let that get to her personally and so Chloe was later told that she was the one that needed mediation with Lucifer. And therefore, she took Candy’s place during his session with the mediator.

So the two were able to hash out a few things. Lucifer explained how much he had been through and how Chloe almost dying had affected him which made Chloe finally understand that he got scared yet she was still angry and getting the mediator to talk didn’t exactly get Chloe to let her guard down. But the two did figure out what part the mediator played in everything. He apparently helped Ash get most of his ex-wife’s money because he was a fan of Ash’s band and had wanted them to go far. And so the ultimate fan had known how to get the band noticed.

He and Ashe had used the money to buy up most of the band’s CDs and that flooded sales. So the band eventually ended up on the charts and that got them actual fans. Yet, there was one minor problem with making it big. Ash then believed that they should start trimming the fat off the band and he had wanted to fire Marla. Marla was the band’s guitarist and Ash thought they could do better so he was going to fire Marla on the night he died though Marla didn’t mention any of that when the police spoke to her and so Chloe had a few more questions for the young woman.

Except Chloe didn’t want to take Lucifer with her and so he sort of showed up on his own. He went to the club the band frequently played in and he had played a song just for Chloe because he knew how much she liked the Bangles as well as any other 90s tune. Though Chloe couldn’t get mad. She had seen Lucifer do something nice for her and he had even cornered Marla which helped her interrogate the other woman. So Chloe was on the path to forgiving Lucifer as Lucifer was realizing that maybe he should talk to his mom.

His mom had been worried wick about him and she felt partially guilty for Lucifer being so broken that he got married to Candy on a whim. But Amenadiel had spoken to the both of them and that finally got them in the same room again. So Lucifer told his mother that he didn’t forgive her though he understood that she merely had wanted the best for him when she manipulated his feelings against his father. And on Charlotte’s part, she did acknowledge that she was guilty of manipulating and she told Lucifer that she had gotten obsessed with the idea of returning to the Silver City.

The Silver City was heaven and Charlotte admitted that she still hadn’t let that dream of returning home go. Though she stopped trying to play Lucifer and simply told him her plans. She said that Lucifer’s rebellion would have won if he had had the flaming sword and so she told him that all along the flaming sword had been the blade they had in their possession. So Charlotte told Lucifer that they already had everything they needed to go home and that God wouldn’t be able to stop them. And so learning the truth meant Lucifer’s plan worked.

Lucifer had pretended that he and Candy were married because she was in a bad situation and he rescued her, but in return “Candy” who was actually a lot smarter than she appeared had helped him con his mother. The same mother that he knew had a plan and who was tired of trying to figure out. So his plan worked and his mother told him everything. However, Candy also warned Lucifer that he shouldn’t continue to mess around in his relationship with Chloe. She had spoken to Chloe and she had seen how much the other woman cared for him. What with Chloe being happy once she learned that Lucifer kept mentioning her in Vegas.

So Chloe and Lucifer’s relationship did some improvement despite everything that happened and while Marla wasn’t their woman they were able to later figure out that it was another band member by the name of Doug that had killed Ash because Ash had suddenly wanted to go solo just as the band was taking off.

And so Lucifer and Chloe were back to closing cases and in the end she didn’t mind that he had taken off without telling her.