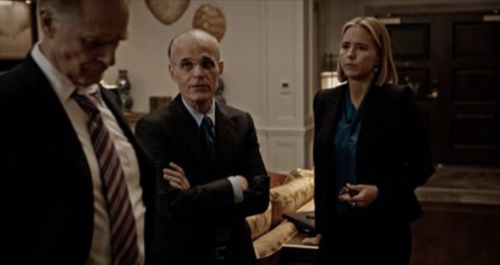 Tonight on CBS Madam Secretary airs with an all new Sunday, October 8, 2017, season 4 episode 1 Premiere called, “News Cycle” and we have your Madam Secretary recap below. On tonight’s Madam Secretary episode, as per the CBS synopsis, “Season 4 begins with a diplomat suddenly dying during a meeting with Elizabeth (Tea Leoni) on the first day of the U.N. General Assembly. Later, a “fake news” story surfaces claiming Elizabeth is responsible for the man’s death.”

Henry is watching a young man on video as he is being interrogated. Meanwhile, Liz has come home with Ally after a shopping trip. She is headed to college in 2 days. Stevie and Jason come downstairs. Jason wants to change Ally’s room into a game room. Stevie recognizes all the same things their mom bought her for college. She sold them.

That night, Liz talks to Henry about how they will have an empty nest soon. She wants them to come up with hobbies they both like.
Nadine gives Liz a rundown of her agenda for the day. She arrives at her function. Russell and Carradine tell her that China has pulled out of their Free Speech Resolution. All 3 of them decide they will take over the narrative and let china make the next move.

Henry meets with the young man in the video that was being interrogated. He tells him he is in. he has to be serious because the director was hard to sell on the idea. The young man tells him yes.

Liz meets with a foreign official named Mr. Bento to speak about the South China Seas. She offers him water in the large conference room that only holds the two of them. He drops to the ground, banging his face off the floor. She drops down to help him. He is unconscious and bleeding. She yells for help.

Liz is sitting with her staff. She tells them that Bento died. They think it was cardiac arrest. Her assistant suggests she eat and change her clothes, she has blood on her. She gets up and retreats to her room. She calls Henry. He is trying to pack Ally for school.

Liz meets with the President of China about Bento. She wants to know why bento wanted to meet with her. The president wanted to know the same thing.

After her meeting, Nadine tells Liz that Bento’s body was released with no autopsy to the president.

Liz meets with her brother for lunch. She asks him to test the blood on her sleeve.

Her staff informs her that in the last months, Bento really tried to get in touch with her. He sent her tons of emails. Liz tells them that she needs to talk with his wife.

Liz’s brother tracks her down. The man was poisoned. She meets with her staff to tell them what she has found out. Russell wants to send a public message to China. He wants to tell the press.

Henry is having a hard time getting Ally unpacked. Liz shows up. They go to lunch in the school’s cafeteria. People are taking pictures. Her staff tells her it is time to go. She is half way out of the cafeteria when her staff tells her she is trending on Twitter. People think she killed Bento.

Liz goes on the air with a local news station for an interview. She is questioned about her involvement with Bento. The news anchor says that some people think she is the murderer. She snaps about the media’s responsibility when it comes to publishing fact from fiction. This accusation against her is baseless. He shows his viewers and Liz video footage of a senator demanding the FBI look into the situation. After the interview Liz and her staff are leaving the news studio, outside the building they see protesters.

Russell comes storming into her office. He is angry. He doesn’t like how Liz snapped on air. The polls of American who think she is guilty is at 22%. Nadine gets mad and tells Russell that Liz had to defend herself. It isnt her fault she was the victim of false reporting. She tells him to grow a spine. Russell doesn’t even want to respond to her. He tells them that this is going to create a lot of damage. He tells them all to put a sock in it. Nadine tells Russell she isn’t going to apologize. Russell leaves, slamming the door. Nadine tells Liz that Bento’s wife wants to talk.

Liz talks by Skype with Mrs. Bento. She tells Liz that their daughter died 6 months ago from a drug overdose which is strange because the president told Liz it was a car accident. Her husband was under a lot of stress recently. President Salvo informed them that they were not safe. He offered them a place to live, a smooth immigration to Australia. Mrs. Bento refers to the president as a very close friend before she begins sobbing.

Liz’s brother shows up. He has Bento’s official blood test. He died of a substance only know to be used by an upcoming cartel and one other source. Nadine points out the overdose of Bento;s daughter. They all start brainstorming possible reasons that someone would want to kill Bento. One of Liz’s staffers suggest she is not safe after Bento was killed in front of her. They all decide that the negative news cycle could also be the work of the cartel trying to take the spotlight off of them.

Liz meets with the President. Her and her staff has connected all of the dots. The cartel took over an entire city and is buying islands. The president denies it. Liz assures him she knows the truth. The president breaks down. It is true. They have been taken over by the cartel. Bento fought until the end, he was killed. She tells him that she will help him fight.

Liz meets with Minister Chen out for a walk the next day. It is her aim to change the news cycle and get him on her side, to help with her agenda. He agrees.

Henry’s informant is having health issues with his pills. He tells his sister that he is fine. She reminds him what McCord has done for them. He tells her he will be fine.

Liz arrives home. Henry tells her that 12% of Americans still think she is a murderer. The two talk in bed about the weapon of the news cycle.

Liz runs into the Chief Justice at a power breakfast. She is looking for the senator who bought into the fake news. She confronts him. He isn’t sorry. His aim is to chip away at Dalton’s approval ratings.