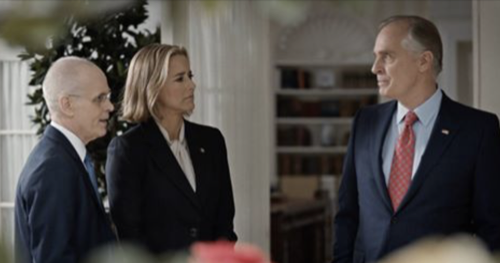 Tonight on CBS Madam Secretary airs with an all new Sunday, October 22, 2017, season 4 episode 3 called, “The Essentials” and we have your Madam Secretary recap below. On tonight’s Madam Secretary episode, as per the CBS synopsis, “Elizabeth tries to fund an electrical grid in a Syrian refugee camp before riots break out in the country due to a lack of electricity and water. Meanwhile, Henry searches for Dmitri when he goes missing.”

Liz is doing yoga. She shuts it off because the instructor is annoying. She starts watching the news in mid-pose. The man who wants her job is being interviewed. He is discussing a possible shut down. Liz has a disgusted look on her face.  Henry comes in and laughs a little. He is feeding his feelings. He is nervous about telling his boss he has hired a drug addict.

Liz arrives at the office. Jay briefs her on what happened overnight, a riot and the Lebanon refugee camps. Liz and the team must work fast to address these issues before the shut-down. Meanwhile, the president meets with the senator.

Henry speaks with his boss about Dmitri. Henry points out his value and what he has done so far. Henry’s boss is willing to get Dmitri some help, but if it doesn’t work out this is on Henry.

Nadine talks to Nancy and Matt about the shut-down. Nadine’s son is on the line. She chats by video with him and his wife. They break the great news. They are 4 months pregnant! And they need a favor.

Liz and Jay speak with the camp to see if there is something they can do to get power turned on before the shut-down.

Henry visits Dmitri’s house. His sister tells him that Dmitri has not been home. She doesn’t know where he is. She thought he was on the job. Henry has to calm her down.

Nancy meets with Nadine. She is scared about having her baby and balancing her career. Nadine gives her the only advice she has. Relax and enjoy your baby.

Liz meets with the president to ask for funds for the camp. With the shut down a possibility, he turns her down.

Henry and Dmitri’s sister go looking for him. They find him. He is trying to get sober on his own. Henry tells him he cannot go it alone. Meanwhile, Liz has an idea – solar power could help them power the camp. Nadine says it is worth a try.

The office throws Nancy a baby shower. Jay interrupts to tell Liz he has found a source, but they are Israeli. She has an idea.

Henry brings Dmitri to rehab. Meanwhile, Liz meets with Israeli officials to get them to agree to help. After some budging, they do.

The president continues to try to avoid a shut-down. The senator doesn’t want to compromise. The president gets up and leaves 3 hours before the deadline. He goes to visit veterans. Something he does every month. As he shakes their hands the clock runs out.

Liz is upset. She cannot believe the shut down has happened. Nadine has something to tell her. She will be leaving to spend time with her son and his family. Liz hugs her as they say goodbye.

Liz holds a conference to say thank-you to all the personnel who are non-essential. The camp finally gets power. Nadine walks the halls one last time to the elevator as she leaves for the last time.