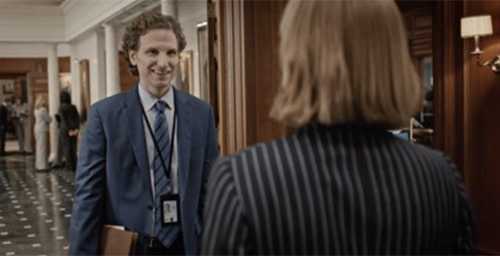 Tonight on CBS Madam Secretary airs with an all new Sunday, November 5, 2017, season 4 episode 5 called, “Persona Non Grata” and we have your Madam Secretary recap below. On tonight’s Madam Secretary episode, as per the CBS synopsis, “Elizabeth is determined to continue to hold a human trafficking conference in Kyrgyzstan despite the inappropriate actions by a U.S. ambassador. Also, Elizabeth and Henry worry about Alison when she keeps coming home from college.”

Henry briefs a number of senators on the growing threat of the Taliban in Afghanistan. Liz’s nemesis is in the meeting. He blames her for the growing troubles. Henry reminds him that he ran his platform on security and so he should put his money where his mouth is. Henry leaves happy he defended his wife and got his funding.

Liz welcomes back everyone following the government shut down. She introduces her new chief of staff.

Dmitri comes back to work. The team assembles for a quick briefing. They plan to add more bodies in the field to keep watch and gather information. After the meeting, Henry tells Dmitri he is happy to see him back.

Liz wants the president to come with her to talk on Human Trafficking. Russell doesn’t want him to. He thinks it will look bad for them. The president agrees to go.

Ally comes home from college. They all spend time in the kitchen eating ice-cream. Liz gets a call from Julia. She is being expelled from the country because she was caught having relations with a member of the hosting family for the Human Trafficking summit. Because of the controversy of Julia and her ambassadorship, Russia pulls out of hosting the summit. POTUS decides not to attend. Liz and Jay start looking for a new country to host.

Henry is home working when Ally comes home. He asks her about her mid-term, a dress she is supposed to be designing. He was in her room. She never started it. He wants to know if she is all right. Ally doesn’t like this design class she is in. Everyone there has been to Milan and sipped spritzers with fashion designers.

Henry gets ready to leave to Afghanistan. Liz is scared. She cannot believe he is headed into war territory.

News breaks on Julia and her affair. Any potential country that was considering hosting the summit pulls out. Liz is left scrambling with no hope.

Julia is brought in for questioning. Some of her private emails and other material was compromised. Meanwhile, Henry meets with a leader in Afghanistan. The man has a picture of Julie on his sidetable. He tells Henry her worked with her on a vaccine initiative. Henry thinks quickly and calls a member on his team. He tells her that their safe house location has been comprised. He leaves and heads there. Just a brief distance away an explosion goes off.

Henry calls in to POTUS and the others. Liz asks him if he is ok. The president tells him and his team to get out of there.

Liz gets back on the phone with the Russian president. She tells him that she knows his brother had an affair with Julia but she also knows he was working on the GRU. Because of this, it would be in his best interest to stay on as host of the summit. He finally agrees.

Ally asks Stephanie to model her dress at the fashion show. Before Stephanie takes the stage, she tells Ally that she and her fiancé are through, they called off the wedding. She hasn’t been feeling well and she has had some stage fright. Ally talks her through it and she takes the stage with a promise that they can cry, watch movies and eat ice-cream.

One of Henry’s informants and all of her contacts have gone missing. He meets with POTUS. The president thinks there is a person from their side that leaked information.