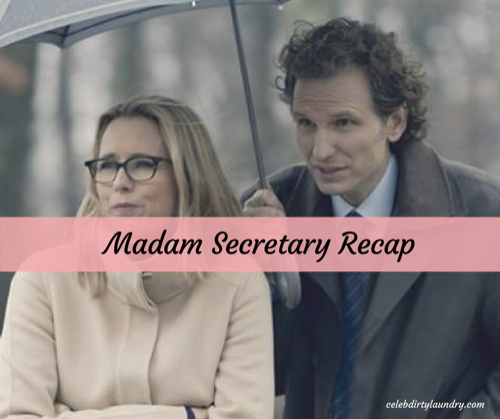 Tonight on CBS Madam Secretary airs with an all new Sunday, March 5, 2017, season 3 episode 14 called, “Labor of Love” and we have your Madam Secretary recap below. On tonight’s Madam Secretary episode, as per the CBS synopsis, “Elizabeth (Tea Leoni) works to save the marriage of two star-crossed lovers, the son of the Colombian president and the daughter of the rebel leader, in order to secure a peace deal after years of civil war. Elsewhere, Henry prepares to send his operative undercover; Jay deals with his tenuous marriage situation and Daisy makes a shocking discovery regarding Kevin.”

Tonight’s episode of Madam Secretary kicks off at the McCord house, Elizabeth, her husband and the kids are all gathered around the TV watching a news report on the South America treaty, the son of the President and the daughter of the resistance leader fell in love, and they are being called the Romeo and Juliet of Columbia.

Luis and Seledad’s romance has ended over 50 years of conflict on South America.

Elizabeth gets a call from work, she needs to go in ASAP, there’s an issue with the treaty. Stevie catches a ride with her to Russell’s office.

Elizabeth arrives at the office and learns that Venezuela is backing out of the peace treaty that she has been working on for weeks. She argues with the leader of Venezuela that going in to business with the US could change their economy by leaps and bounds and eliminate the drug trafficking and illegal coca fields.

Henry heads to work, he meets with his asset Ian, he’s going undercover and joining a cult full of religious radicals called Covenant of John. Ian thinks it will be a walk in the park, but Henry warns him that if they sense he isn’t the real deal, they won’t hesitate to kill him. They have GPS sewn in to Ian’s collar. He needs to get in, find the bomb they are hiding, and get out.

Russell summons Elizabeth to his office, President Moreno is waiting for her, and the leader of the resistance – and their lovebird kids, Luis and Seledad. Things are certainly tense, Elizabeth tries to change the subject, and asks Seledad about her upcoming wedding plans. They make small talk about wedding dresses, and Stevie’s upcoming nuptials.

Jay arrives to work late, and in a miserable mood. He has been separated from his wife Abby for four weeks now, and sleeping on his friends’ couches. He rants at everyone at the office that they should be worried about the peace treaty, not fawning over Luis and Seledad’s relationship. Later, Jay confesses to Matt that he thinks Abby may be seeing someone else.

After a successful press conference with Seledad and Luis, everyone gets ready for the dinner. When Elizabeth and Henry arrive at the White House for the dinner, President Dalton and Russell are freaking out. Apparently after the press conference, Seledad dumped Luis and skipped town. Now, without the two lovebirds, the entire South American peace treaty is falling apart.

Stevie shows up at her mom’s office with Seledad, apparently she has been hiding her. Seledad is having second thoughts about getting married, now she thinks she wants to get a visa and go to college in the US and study medicine, and she needs Elizabeth’s help.

Ian arrives at the Covenant of John compound, Henry and another agent are watching Ian through a camera that he has attached to him. The radicals don’t exactly welcome him with open arms, they put a bag over Ian’s head and says that it’s time for Ian to prove his loyalty. Henry has a bad feeling about this – but there’s no way they can get back-up out to the commune in time.

At the office, Jay is upset, he checked his wife’s phone records and she has been calling a strange number every day ever since he left their apartment. He’s convinced that she’s seeing someone else, he decides to go over after work and confront her about it. When he arrives, Abby is very standoffish and got a brand new hair cut, and he chickens out.

Meanwhile, Daisy has been dating Kevin from budget and planning. After confiding in Nadine that she was really starting to like Kevin and things were getting a little serious, Daisy heads to Kevin’s office to meet up with him for dinner. When she arrives, he appears to be sleeping on the couch in his office. She tries to wake him up, and realizes that something is seriously wrong, she calls 911 and tells the operator that she thinks Kevin is dead.
Nadine rushes down to comfort Daisy, the cops are asking her about her boyfriend, and she’s embarrassed when she realizes she honestly doesn’t know much about him. The EMT’s think that Kevin’s death was a result of a heart attack and congenial birth defect.

Elizabeth heads home and crawls in to bed with Henry. It was a tough day – and it’s becoming really hard to believe in love, Luis and Seledad’s engagement was called off, Jay’s convinced his wife is cheating on him, and Daisy’s boyfriend died in his office.

The next day, Matt meets up with Jay. Apparently, Abby started talking to his friend Scott a few weeks ago, and he has been a shoulder to cry on. It hasn’t gotten physical yet, but Abby wants to “see where it will go.”
Elizabeth arrives at the office and she and her team start plotting ways to get Luis and Seledad back together so that they can save the peace treaty.

Daisy heads to Stevie’s apartment and drags Seledad off the couch. She’s been camped out there for two days. Meanwhile, Jay tracks down Luis to give him a pep-talk about getting back together with Seledad. Daisy and Jay drag Romeo and Juliet back to the White House to meet with Elizabeth, she forces them to sit down and listen to what she has to say.

Elizabeth’s speech is moving, and she convinces Seledad and Luis to get back on the same page, and convine their parents to sign the South American peace treaty. Their families reluctantly agree, and everything is back on track.

Later that night, Daisy is home alone in her bath robe, watching TV. There’s a knock at her door, the FBI has come to bring her in for questioning, and they have a warrant to search her apartment.
Elizabeth rushes to the room where Daisy is being held. She explains that Kevin’s real name was Joseph, and he was an undercover CIA agent working in the White House. The FBI has opened an official investigation because Kevin didn’t die of a heart attack…he was murdered.