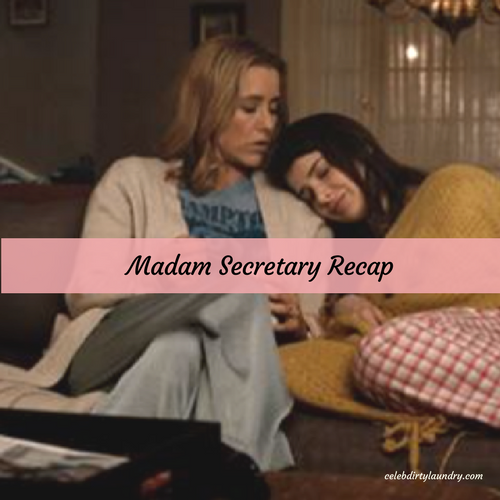 Tonight on CBS Madam Secretary airs with an all new Sunday, April 23, 2017, season 3 episode 19 called, “Global Relief” and we have your Madam Secretary recap below. On tonight’s Madam Secretary episode, as per the CBS synopsis, “When warring rebel groups threaten Elizabeth’s (Tea Leoni) Somalian food relief efforts and kidnap an American aide there, she reluctantly considers asking a notorious Russian arms dealer for help.”

Elizabeth is holding a conference with her people. Just when she thinks she is averted several crises about a new one. And rebel who is arming Somalians. After the update she heads to the White House. Missiles, weapons and drones have been stolen. They have a lead on an American citizen of Serbian decent. The meeting is interrupted, Elizabeth’s office needs her back on SAP.

The food she was trying to transport to some Maya was intercepted. Nobody was hurt. She goes to talk to the cemetery. She needs him to bend the rules. He needs to protect American jobs and American farms. He hates to turn her down and see Somalians suffer but he needs to do his job. He could help her though if she calls the DOD.

Henry is updating officials on his latest as it has blown his own cover. They’re not happy. Henry heads home to cook dinner. Elizabeth shows up home. She thought they were going to get take out. Their daughter comes downstairs, she is upset because she doesn’t think she’s going to get into Rafferty. Stevie comes in, she wants to go to Harvard. A news alert comes in, two rebel groups in Somalia are shooting at each other.

She wants to work some diplomatic magic. Her daughter comes downstairs, she can’t sleep. They sit down together to eat ice cream and talk about how stressful the college process is.

Henry gets news that the authorities are going to make an arrest this week. The Portland office wearing to read the lab. She told Henry that they plan to take him off the case. He calls Elizabeth to tell her the news. She is about to head home when her team comes in to tell her that Anese has been captured by the rebels. She wants to use the rebel gun runner to talk to the rebels. Her team think she’s crazy.

Elizabeth meets with a security official about Anese. He doesn’t want to send his men into a war zone. She is going to try to get a cease fire. She just needs him to pick up a hostage. The president is angry that she would talk to an arms dealer, but she has no other choice. They give her the green light. She meets with him. If he can get them to stop fighting then she will cancel the investigation into him. He wants compensation. She tells him she can’t pay him cash. He starts to walk away. She stops him, she wants to hear his proposal.

Meanwhile, Henry and the kids gather around the computer to see if Ally got into Rafferty. Elizabeth gets a message from Ally. She takes 10 minutes out to hear the good news. She returns to hear the arms dealer’s demands. He wants the latest yacht that has hit the market. It has all the technology and an escape pod!

Henry sits for a meeting and learns they need him back on the case. They are desperate.

The president has never gone through quite a situation, giving an arms dealer a yacht! On her way out of the office, she hears from Russell that Stevie didn’t get into Harvard, but he can pull some strings. She has no idea. She goes home and hits Henry in the head with the newspaper. He didn’t know either. They talk, they are going to wait for her to tell them.

The next day, the cease fire was a success. She heads into the conference room to watch them rescue and pick-up Anese. She sees him on camera as he comes out a door. Gun fire breaks out. She Is dumbfounded. It looks like the snipers got spooked. They lose eyes on Anese. The soldiers head in and find Anese. He is wounded but okay.

At home, Elizabeth prepares a cake. Stevie comes in and tells her the news. Stevie can tell that her mom already knows. She has the worst poker face. They celebrate Ally’s acceptance. Ally announces that she has changed her mind, she is going to Bay Arts in DC. They are all happy.

Elizabeth talks with Anese by video. He is okay and the food has been delivered. He thanks her for saving his ass. They say goodbye. Photos come in for her. Somehow the rebels got US weapons. It was the rebel arms dealer who stole them from the Texas Depot. The CIA is trying to track him down.

Henry is called in. They have lost the location of the group. They could be anywhere by now. Meanwhile, the group is in Syria.