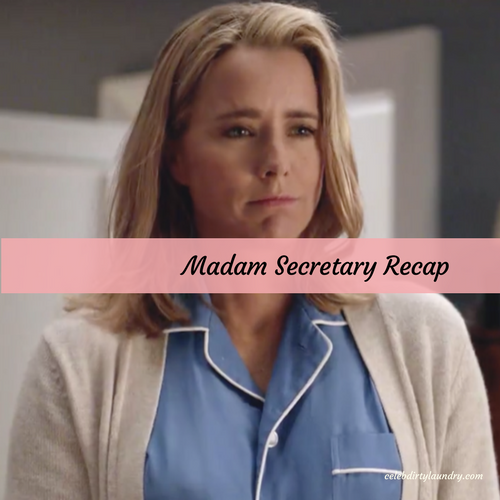 Tonight on CBS Madam Secretary airs with an all new Sunday, April 30, 2017, season 3 episode 20 called, “Extraordinary Hazard” and we have your Madam Secretary recap below. On tonight’s Madam Secretary episode, as per the CBS synopsis, “As the U.S. hunts for the person believed to be behind the CIA arms smuggling case, Elizabeth and her team must work to save Jay when he’s kidnapped in Nice, France, during a fact-finding mission into the suspect.”

The president meets with his council and they make a plan on how to deal with Georgie and the arms dealing. They will attempt peaceful ways but will take him out if they have to. Elizabeth and Jay meet and review the Intel they have on Georgia. Jay heads to France to gather more information on the arms dealer. Henry offers his theory to the CIA and they focus their resources in Jerusalem. Jay is kidnapped in France.

Elizabeth and Nadine prepare for a speech and Jay calls to let her know he has been taken by Dido. She has until the end of the business day to unfreeze his accounts if he wants to see Jay again. Elizabeth meets with her team to come up with a plan and then goes to meet with the president. The United States will not negotiate with terrorists. Henry asks Jason’s math teacher about the $127 calculator he needs. She says he must have read the notice wrong. It only costs $27.

Elizabeth asks around about Dito and finds out her can’t be trusted. Elizabeth’s team refuses to leave the white house. They all want to do whatever they can to help Jay. Henry calls Elizabeth and they discuss the calculator. Jason is lying to get $100 from them. Elizabeth encourages Henry to get the goods on Jason. She asks Henry if the Jay situation is her fault. She has to get him home safe.

Henry confronts Jason about the calculator and he admits there is a boy in his class who is a prince and is trying to romance his girlfriend. He wanted to use the money to impress her. Nadine offers Jay’s wife Abby comfort and promises they will get Jay home safely. The military surrounded the house where Jay is being held but Elizabeth asks for my time before they go in. She doesn’t think he is the arms dealer. The president gives her 48 hours.

Dito calls Elizabeth and the president gives her permission to offer him his freedom and they will return his money if he releases Jay. They have no evidence he is involved in arms dealing. Dito releases Jay unharmed. Henry encourages Jason to reach out to his girlfriend. The team starts over in trying to figure out who is behind the arms dealing. Abby and Jay reunite and she is so happy that he is OK.

Someone breaks into Dito’s hotel and opens fire. He is killed but the US had nothing to do with it. Elizabeth meets with Darryl and tells him her team has been tracking stolen American arms and have found that Paul Crane is somehow involved. He was interviewed and told them he has been working with Darryl. He is arrested. All the pieces come together and the story makes sense. The arms dealing case is solved. However, Henry and the CIA realize they are correct and the terrorists are heading to Jerusalem. Jason and his girlfriend make up.