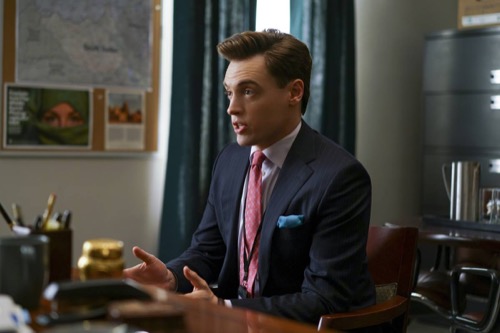 Tonight on CBS Madam Secretary airs with an all new Sunday, May 14, 2017, season 3 episode 22 called, “Revelation” and we have your Madam Secretary recap below. On tonight’s Madam Secretary episode, as per the CBS synopsis, “As Elizabeth (Teas Leoni) and President Dalton (Keith Carradine) head to Rome for the G20 Conference, she is concerned for Henry’s (Tim Daly) safety when he is sent to Israel to intercept the doomsday cult’s bio-weapon before it is deployed.”

Several men are being held in a hospital after being exposed to a deadly airborne virus. The leader speaks in Arabic that the virus is ready to be released. The President and team meet to review recent surveillance photos that show the scientists that have been working with the doomsday cult are now in Jerusalem. Henry is going to be sent with the team to Jerusalem. The President and Elizabeth speak to the leaders of Palestine and Israel to get their help in trying to find the scientists before it is too late.

Elizabeth is heading to Rome and Henry is going to the Middle East. Their daughter will take care of the house and the younger kids while they’re gone. The terrorists realize the Israelites are on to them and shot the scientists before they can be caught. All but one dies. Henry and the team find evidence that the virus is being used in Syria on prisoners of war. They have to reach out to Russia. Nadine and Blake talk about his upcoming meeting with his old classmates. He is anxious because he knows they all think he is a failure.The US sends troops

The US sends troops into the medical lab where the ill are being treated and take the vials of the deadly virus. As they are about the leave they come under attack. During the firefight the US accidentally bomb the Russians working with them instead of the enemy. The media plays the bombing repeated and says that the US purposely attacked Russia. With all the attention the team thinks the cult will no longer target Jerusalem now they have to figure out their new target. Henry interviews the one scientist who lived. He is a religious fanatic and Henry tries to use his faith and knowledge of the bible to get him to talk but he refuses.

Blake and Nadine run into his old friends and she talks him up to impress them. Elizabeth and her team arrive in Rome. Stevie calls to see if Elizabeth has been meddling in getting her into law school. She admits she has. Henry continues to try to get the scientist to cooperate by threatening him with placement in a maximum prison. He tells Henry that he thinks the terrorists are heading to Rome and plan to kill the Pope. The team is able to find the drone armed with the virus and take it down before it explodes and releases the deadly gas. Jason gets sick and is taken to the hospital. Stevie has to miss her Harvard interview to take care of Jason.

Blake talks with his old school friend who asks why he hasn’t told his co-workers he is gay. He encourages him to be happy. The President and Elizabeth attend a large government meeting in Rome. Intelligence comes in that the drone did not have any chemical weapons. The Pope wasn’t the target. The President is. They need to evacuate the room NOW. The terrorists release the virus into the air vac system. The system is shut down before it can reach any of the guests but the two terrorist are killed. Stevie realizes she doesn’t want to go to law school. She wants to stay in Washington and do work that matters today. Law school can wait. She is happy where she is right now. Elizabeth and Henry head home. As Blake is dropped off at home he tells Elizabeth that he is Bi-sexual. He babbles non-stop until Elizabeth gives him a big hug and says good night.

Elizabeth and Henry head home. As Blake is dropped off at home he tells Elizabeth that he is Bi-sexual. He babbles non-stop until Elizabeth gives him a big hug and says good night. THE END