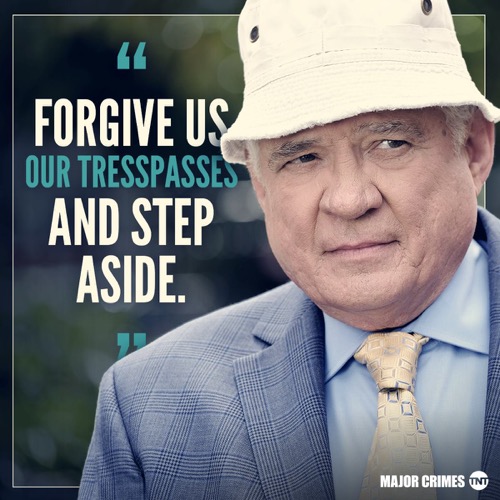 TNT Major Crimes airs tonight with an all-new Monday, November 14, 2017, episode and we have your Major Crimes recap below!  On tonight’s Major Crimes season 6 episode 3 premiere episode as per the TNT synopsis, “Sanctuary Part 3 of 5. As Major Crimes continues to search for the remaining St. Joseph’s Three, Sharon finds her personal life-threatening her career.”

The show opens with Sharon and the team searching the priest’s residence. They are very upset to learn that Father Jonas has left the country. They learn he is in Mexico. The Bishop goes down to the station and tells them they are wasting their time looking at Father Jonas. Louie is not buying it. He reminds the bishop that the boys disappeared while on a Catholic school field trip and Lucas’ body was found at the church. What is he trying to hide? He leaves without offering any help.
The chief meets with a reporter named Nancy and gives her the scoop about what the team knows so far. He hopes she had dug up some dirt on Father Jonas. The FBI reviews all of Marvin’s online video’s to see if they can learn anything more than that Marvin is a racist neighbor. Julio returns to the team and they are very happy to see him. Sharon has an episode where she has trouble hearing and feels dizzy but she hides it from everyone.

The FBI conducts a firearms compliance check on Marvin in hopes of getting a chance to speak to his daughter Kelly. Kelly was a good friend of the missing boys. Camelia talks to Kelly while the FBI searches the home. They find a huge stash of unregistered weapons. Miguel’s father tries to attack Marvin as he is being arrested. The team also finds freshly dug dirt in the backyard. They call in the cadaver dogs.

Rusty talks to Buzz about Phillip Stroh but he doesn’t offer much information. Camelia interviews Kelly at the station while Andy interviews Marvin. The dogs don’t find anything at Marvin’s home. Kelly and Marvin’s stories don’t match up. Kelly says she and Lucas were in love but her father did not want them to date. Marvin says he knows that Lucas was trying to marry his daughter to get his green card.

Kelly tells the team that Ryan was gay and had a crush on Miguel. All the kids knew he was gay but his family didn’t know. Kelly tells them the boys told her they were going to do the coolest thing ever and takes selfies. They were sure they would be back to the field trip before anyone even noticed. They won’t tell her what they were going to do because it was to be a surprise.

The reporter the chief talked to reports that Father Jonas was moved repeatedly due to having inappropriate relationships with student’s mothers. Louie points out that all of the missing boy’s mothers are very attractive. This could be the clue they needed. The team starts reviewing each of the parent’s alibis. The team interviews Dr. Garza’s business partners. They get offended at the suggestion that Mrs. Garza was having an affair and start to leave but the team threatens to call the medical board and they return to the interview.

They report that Dr. Garza wasn’t in surgery when Lucas went missing. He was attending a NA meeting. The team is unhappy to learn they were lied to about Dr. Garza’s whereabouts. Sharon goes to meet with the head priest. She goes into the confessional and he enters to hear her confession. He tells her Father Jonas was conducting a funeral when the boys disappeared. She is looking in the wrong place. Sharon returns home and has Rusty take his gun apart and put it back together. She is impressed with his abilities. She asks if he has talked to Gus but he hasn’t. Sharon is still having episodes of dizziness but doesn’t tell anyone.

The next day Sharon attempts to exhume the body of the person buried the day the boys disappeared. It is possible the boys are also buried in the coffin. The church gets an injunction to stop her. Just then Buzz is able to figure out where Marvin’s cabin is and the team heads there to search for the boys. They don’t find the boys but do find a list of illegal aliens in the city with names and addresses. It seems Marvin was targeting illegal aliens.

As the team reviews Marvin’s list back at the station they see on the news that the FBI has found the two remaining boys alive in Mexico. The FBI agents meet with the team and Sharon is irate. They were searching for the boys and putting themselves in danger while the FBI already had them in their custody. As she yells at them she passes out and falls to the floor.