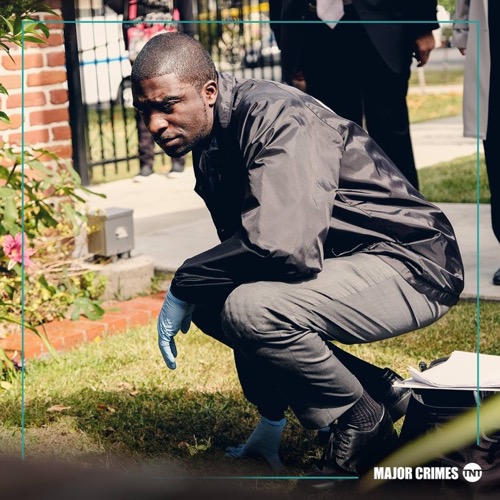 TNT Major Crimes airs tonight with an all-new Monday, December 26, 2017, episode and we have your Major Crimes recap below!  On tonight’s Major Crimes season 6 episode 10 and episode 11 episode as per the TNT synopsis, “A surprise death in the law enforcement community seems to be the work of escaped serial killer, Phillip Stroh. Ricky Raydor helps the division with a difficult search for a Mr. and Ms. Bechtal, and Emily Raydor offers Rusty some sound advice./Unable to locate Stroh in the present, the squad looks for answers in his distant past, hunting for the former Ms. Bechtal. Meanwhile, the squad struggles with Chief Mason, and Rusty grows frustrated with forced proximity to Gus.”

The show opens with a video Sharon made to be shown to her family if she should die. She thanks her family for their love. Louis is then shown speaking at her funeral. He talks about her great strength and the darkness they all feel with her passing. At the church, Rios tells Louis that she is sure that Stroh is in Los Angeles and that Rusty is in danger. She tells him she will see him at the station in the morning. Rios tells him she has a security detail and will be fine. Rios returns home and the guards search her home. They find nothing and she jumps into her pool to take a swim before bed. As she does laps a man in scuba diving gear grabs her and pulls her under water. She drowns.

The next morning the team searches Rio’s house and grounds trying to find clues to Stroh. While it looks like Rios died of an accidental drowning the team is sure it is murder. The captain questions their conclusion but Louis is sure it was Stroh and the team has to find him fast. More video is shown of Sharon talking to her family. Sharon’s kids go through her things and cry. Louis visits Andy and they go together to tell Rusty that Rios is dead. Rusty shares with the team everything he has learned about Stroh. They review each of the dead so far. As they speak Stroh is shown listening in on everything that is being said. Not only is he able to listen in to the whole team he also has video.

Buzz gives Rusty the video Sharon made for him before she dies. The captain reminds Louis that everything must be above the board when they take Stroh to court. He relies on that Stroh will not see the inside of a courthouse again. Sharon’s family continues to watch the videos Sharon left for them. In Rusty’s video, she encourages him to work with her team to take down Stroh.

Stroh continues to listen in on the team and learns they may be able to track down his IP address. He heads to Jim Bechel’s house and kills him. Andy watches Sharon on video as she declares her love for him. The wedding pictures arrive and Andy and Rusty look at them together. The team learns that Stroh had searched for Jim Bechel on his computer. They go to his house to do a safety check and find him dead. He was obviously murdered and the team tries to figure out why Stroh has changed his MO. He is no longer trying to hide his crimes.

Sharon’s daughter and son head back home but no before they beg Rusty to take care of himself. The team learns that Jim Bechel is Stroh’s stepfather. He was married to his mother. They divorced several years ago but Stroh has been searching for his mother. The team also finds Stroh’s medical records which show he is dying from cancer. It sees he is getting revenge on everyone he thinks wronged him before he dies. The team continues to search for Stroh’s mother Gwen. There has been no sign of Gwen since 1992. It seems she has just disappeared.

The team interviews Jim Bechel’s daughter to see if she can offer any insight into Stroh. She tells them she thinks Gwen may be living in Pasadena. Stroh’s man (who has been listening in to the team) finds an address for Gwen and heads out to find her. Gus brings food to the station and sees a picture of Stroh. He realizes that Stroh was at the restaurant the night Sharon died. The team gets the camera footage from the restaurant but it has been edited. Stroh is nowhere to be found in the video. The team gets the address for Gwen and goes to interview her. She has Alzheimer’s and her caretaker tells them a young man come to the house earlier to see Gwen as well.

Gwen is confused but mentions the name Mary Wellington. They do some research and find that she disappeared many years ago. She went to school with Stroh. The team goes to interview Gwen again and she tells them Stroh killed Mary when he was in high school. She helped him hide the body to protect Stroh. Once she realized that Stroh was sick she moved away and changed her name. She didn’t even tell him goodbye. She knew he was a killer and that she couldn’t help him. They decide to keep watch on Gwen’s home hoping Stroh shows up.

Hunt Sanford shows up at the station. She says Gwen is his mother and he wants to know why they upset her. She married his father when he was just three years old and he takes care of her now. Gus and Rusty have to stay together under one security detail and want to head back to the condo. Hunt tells the team he has cameras in his mother’s house. If the team can get the film they will be able to get a picture of the man who showed up to see Gwen. He is Stroh’s right hand man and could be the link they need to find Stroh. Just as the team is about to see his face he hacks into their computer and cuts to the link.